How To Watch Leicester vs Leinster This Weekend From Welford Road

European heavyweights collide this weekend in the Champions Cup as Leo Cullen’s side travel to Welford Road to take on a reborn Leicester Tigers. After a couple of difficult seasons, Steve Borthwick’s side are top of the Gallagher Premiership and look like a force to be reckoned with again in Europe. In arguably the toughest tie to call this weekend, four-time winners Leinster will go there full of confidence as they chase that all important fifth star. Here is all the information you need to watch for the game, including how to watch Leicester vs Leinster this weekend.

When is Leicester vs Leinster?

The game is this Saturday, with kick off at Welford Road at 5.30

How to watch Leicester v Leinster?

The game is being shown live on BT Sport 2, with coverage beginning at 5.15

UPDATE - Due to the Munster game going to extra time, the game can be seen on BT Sport Extra 3. Press the red button.

Leicester made light work of Bristol Bears at the weekend to ensure qualification for the semi-finals of the Gallagher Premiership and will likely finish at the top of the league standings. In the last-16 of the Champions Cup, they were comfortable winners against Clermont with a 56-27 victory On aggregate over the French side.

While Leinster have lost their last two URC games to the Stormers and The Sharks, it was a heavily changed side that travelled to South Africa, with some players making their debuts for the province. The last time they played at full strength was the last 16 victory over Connacht, with a resounding 82-41 victory on aggregate. They have also qualified as top seeds for the knockout stages of the URC.

The big news for Leinster is the return of James Ryan, making his first appearance since Ireland's victory over England in March.

He's partnered in the second row by Ross Moloney, in a full strength side for Leo Cullen.

Rhys Ruddock is on the bench, and the only player in the squad who started last week away to the Stormers.

Leicester have experience and talent all over the pitch, and are captained by England prop Ellis Genge. Their back line is not short of tries, with Freddie Stewart, Chris Ashton and Harry Potter completing a dangerous back three.

SEE ALSO: Stormers No. 8 Gets Away With Dirty Play On Leinster's Harry Byrne 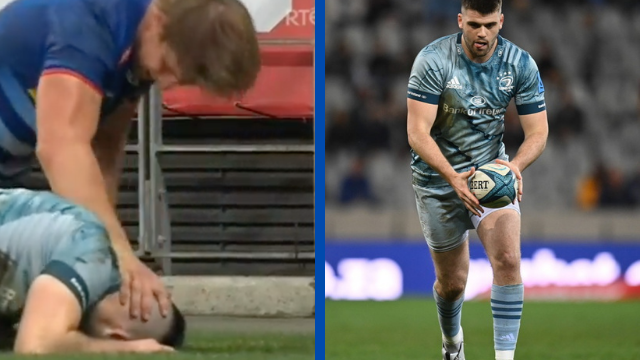