How To Watch Leinster v Munster In The Rainbow Cup

The Pro14’s new ‘Rainbow Cup’ competition gets underway this weekend. It was originally intended to include the South African teams involved in the Pro14, but they have been forced to pull out due to the COVID restrictions in place in Britain and Ireland. Nonetheless, there are plenty of exciting games upcoming and we have all the info you need on how to watch the Rainbow Cup game between Leinster and Munster.

What is the Rainbow Cup?

The Rainbow Cup was devised as a cross-continental competition with four Irish, four Welsh, four South African, two Scottish, and two Italian teams. It was intended to give the South African teams much-needed competitive action ahead of this summer’s Lions tour.

However, due to issues surrounding visa clearances, the South African teams were forced to withdraw mere days before the Cup’s beginning. What’s left is a slightly reformatted Pro14 competition, with only the 12 northern hemisphere teams to play in two conferences. The winners of the two conferences will contest a final in June.

Leinster host Munster at the RDS in Dublin. The game will be played behind closed doors.

When will Leinster v Munster kick-off?

How to watch Leinster v Munster in Ireland?

Eir Sport are the host broadcasters for the game, with their live coverage starting at 7pm. TG4 will have deferred coverage of the game later in the evening, with their coverage kicking off at 9:45pm.

The two met very recently in the Pro14 final, with Leinster ultimately claiming their fourth successive title after a disappointing Munster performance. Leinster are also through to the semi-finals of the Champions Cup after a thrilling win over Exeter, while Munster were knocked out by Toulouse at the Last 16 round.

Leinster have chosen to rest some of their first-choice players, with Harry Byrne given a chance from the start at out-half. Garry Ringrose starts at 13 and captains Leinster.

Munster field a full-strength team, with Peter O'Mahony back from a thigh injury to captain the team. Joey Carbery starts at out-half for Munster.

Eir Sport are showing another Irish derby on Friday night, with kick-off between Ulster and Connacht at 8:15pm. 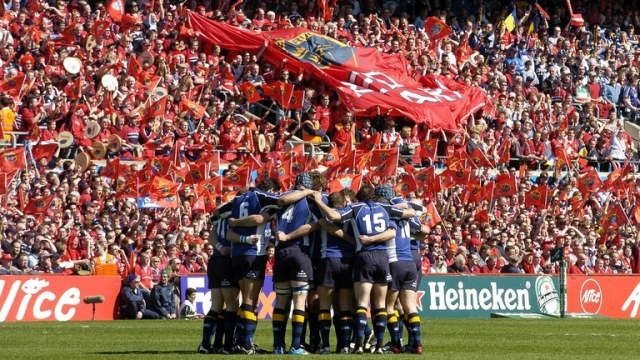 Rugby
1 week ago
By Fiachra Gallagher
Finally, CJ Stander Is Formally Recognised As A Limerick Man
Rugby
2 weeks ago
By Gary Connaughton
Two Stunning Team Tries Help Munster End Unwanted Leinster Record
Rugby
2 weeks ago
By Michael McCarthy
Step Right Up, It's The Completely Pointless Rainbow Cup
Popular on Balls
Rugby
15 hours ago
By Eoin Harrington
Mike Brown's 16-Year Harlequins Career Is Over After Stamping Ban Issued
Other Sports
16 hours ago
By Balls Team
12 Of The Most Cringeworthy Moments In Sporting History
The Rewind
13 hours ago
By Balls Team
The 5 Best Irish Accents By Foreigners In Cinema History
The Rewind
13 hours ago
By Donny Mahoney
The Best And Worst British Media Coverage Of The Ballymurphy Verdict