2015 was the first time that it felt like Ireland had close to 50 players capable of playing to international standard. Even with injuries to the likes of Tommy O'Donnell, Rhys Ruddock, and Martin Moore - Joe Schmidt was able to leave behind talents like Andrew Trimble and people were able to accept it. Gone were the days of 2007, when only 26 of the 30 man squad got World Cup game time.

If we thought the depth in Irish rugby was good now, it'll be even more substantial in 2019. The benefits of Irish rugby's success in the mid 2000's is bearing fruit now, with a new generation of players coming through.

Even with a conservative estimation that the likes of Sean O'Brien (32), Keith Earls (32), Luke Fitzgerald (32), Cian Healy (32) and Jamie Heaslip (35) might not make 2019 (but they really should) - there could be as many as 70 quality players available to the national team - if they are managed correctly.

Some positions have more options than others. Loosehead prop, centres, backrow and fullback are positions where there is an abundance of talent - while positions like scrumhalf, outhalf and hooker are close to being bare should any injuries occur to front line players. 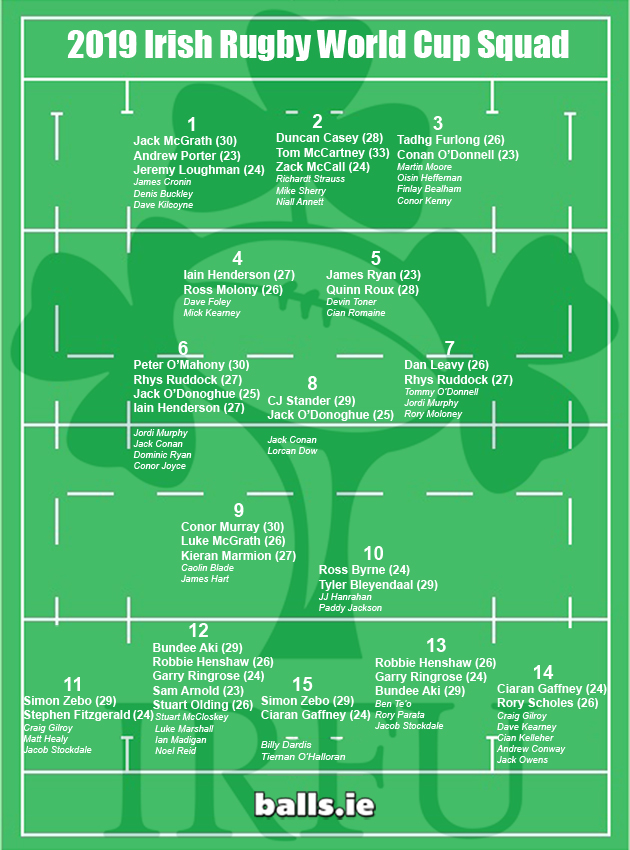 Even just in Leinster there are too many loosehead prop options - Cian Healy, Jack McGrath, Peter Dooley, Jeremy Loughman, and Andrew Porter. It wouldn't be surprising to see one or two of these talented players move to another province under orders from IRFU performance director David Nucifora. Munster have Dave Kilcoyne and James Cronin who are both young and talented. Connacht have 25-year-old Denis Buckley becoming more and more influential for them, while they rate 21-year-old prop Jacob Walshe very highly.

It could be that Ulster will benefit, as they will need someone to back up 29-year-old Callum Black. It remains to be seen how 21-year-old academy prop Michael Lagan will develop.

Look at the quality of the Ulster centres. All four are good enough to start for any province for the next five years. But Ireland suddenly has a lot of talent coming through at centres at the same time, while some overseas and older players are standing in the way.

Unless something huge happens in Ireland's U-19 ranks this year - there will be a shortage of locks and outhalves (conservatively) assuming that Johnny Sexton (34) will not be involved.

Ireland can still improve despite the retirements of some key players, but the next four years are huge for developing the next core of talent.

Rugby
3 weeks ago
By Michael Bolton
'Go F**k Yourselves': Spanish Media Not Taking World Cup Disqualification Lying Down
Rugby
6 months ago
By Balls Team
When The Rose Of Tralee Was Ireland's Rugby World Cup Anthem
Rugby
8 months ago
By Jonathan Byrne
All You Need To Know About Ireland's Rugby World Cup Qualifier Vs Scotland
Popular on Balls
Football
1 day ago
By Gary Connaughton
Latest Spurs Transfer Rumour Could Be Good News For Gavin Bazunu
Golf
3 days ago
By Gary Connaughton
Padraig Harrington Glad He Didn't Have To 'Make A Decision' On Saudi Golf League
28