Yes We Want A Grand Slam, But Don't Sleep On Ireland's Incredible Achievement

While the dust settled at the Aviva Stadium earlier today, Matt Williams, and to a lesser extent Shane Horgan and Shane Jennings, cut a sombre tone on TV3. "Boring", Williams called Ireland's bonus point win against Scotland. Horgan talked about a lack of "romance", and Jennings felt "flat".

This, we remind you, is after Ireland won their 11th test match in a row, their ninth in a row at Lansdowne Road. It was their third bonus point win on the trot, and it had all but sealed the Six Nations Championship, Ireland's fourth in ten years.

It seems the rugby pundits have become a little bit spoiled by Irish success.

Elsewhere, the rest of us were fretting about an England bonus point win in Paris which would leave the fate of the Championship open for another week. Instead, Eddie Jones' team lost to France and scored one try.

In truth, what were we thinking? We are blasé about Ireland scoring bonus point wins, while assuming that England would do the same in Paris. But that's just not how the Six Nations works.

Ireland are being accused of boring rugby, or playing "Warrenball", but scoring 17 tries in three games in not usual fare in this competition. It seems strange it's being taken for granted, or that the same is expected of others teams. 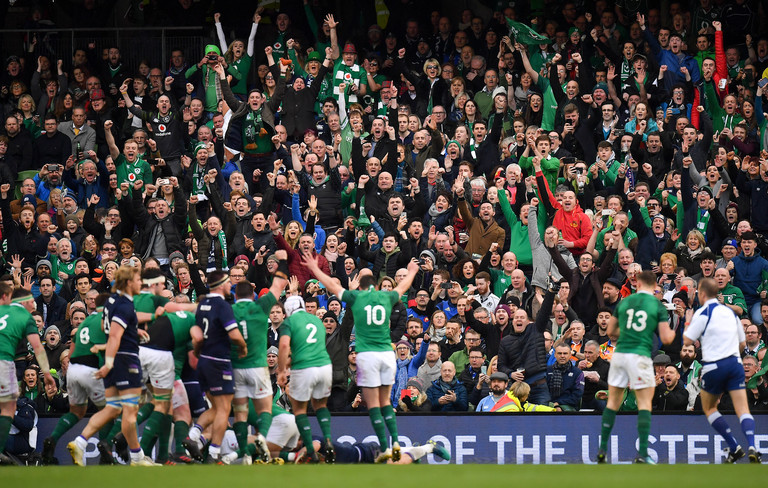 Horgan also said the players are too accomplished to care about winning a Championship. The Grand Slam is all that will matter to the Irish team and management. This is fair enough. Having been in Lansdowne Road last year for the Irish spoiling of the English party, it was very clear there's no glory, joy or even consolation in lifting the Six Nations trophy after being defeated.

But for the rest of us, this is an achievement we should not overlook, no matter what happens in Twickenham next week.

What England showed today is that this is a bloody tough competition to go and win. We might think France are in disarray, but Paris is not a place to go and talk about bonus points. Ireland had to gut it out in Week 1, and got out by the skin of their teeth.

England couldn't do the same.

Of course the Johnny Sexton drop goal with the Titanic soundtrack pic.twitter.com/x1LWfYz6WH

Since the "Home Nations" Championship was first held in 1883, Ireland have only won the tournament outright 14 times, including this year. This will be the fourth in the last ten years - an unprecedented run of success.

Between 1894 and 1899, Ireland managed to win three titles. The Grand Slam team of '48 launched a run of three trophies in four years. Beyond that, it was periodic success and long, long barren periods. Never have there been four titles in a decade.

In 2009, the Grand Slam team ended a 24 year run without a title. Nine years later, the team have added another three. That's incredible.

And for Joe Schmidt, it's all the more remarkable. It's now three from five for him, and this is during a period that he spearheaded the transition in a team that lost two of the all-time greats of world rugby in Brian O'Driscoll and Paul O'Connell, not to mention other international greats such as Jamie Heaslip, Tommy Bowe, and Gordon D'arcy.

For Rory Best and Rob Kearney, it's a fourth title. For Jacob Stockdale, Garry Ringrose, Tadhg Furlong and lots of others, it's a first.

If Ireland can't win in Twickenham last week, none of this will matter to the players or to Schmidt. In the short term, it will be a failure. But this is an achievement that should not be overlooked. Four titles in ten years, something they have never done in the 136 years they've been playing in this tournament.

SEE ALSO: Watch: Superb Garry Ringrose Returned And Reminded Us What We All Missed

Rugby
3 years ago
By Maurice Brosnan
Pressure On England Coach Eddie Jones As RFU Publicly Demand Results
Rugby
3 years ago
By Eoin Lyons
Stockdale Proves He's As Cool As A Cucumber With England Comments
Rugby
3 years ago
By Gavin Cooney
Jacob Stockdale Confirmed As Player Of The Six Nations
Popular on Balls
Rugby
2 days ago
By Colman Stanley
Keith Earls Shares Story That Captures Andy Farrell's Decency
Football
2 days ago
By PJ Browne
'If He Continues With Performances And Goals Like That, Stephen Kenny Will See It'
Football
2 days ago
By Eoin Harrington
Quiz: Name Every Player To Score In A Champions League Final
Football
1 day ago
By Gary Connaughton
Portsmouth Likely To Retain Gavin Bazunu This Month Despite Championship Interest