There's no Grand Slam on offer in the Aviva this weekend. There isn't even a Six Nations Championship. But a glorious Irish tradition of pulling down the English chariot at the final corner illustrates Ireland's ability to win on Saturday - we just love when England come to town for the last game of the Championship!

A great British poet decreed that April is the cruellest month, but if he was of this age and had been minded to watch rugby, he might have scaled back his decree by a month.

For thrice in this century have Ireland sought refuge from their own failures by using March to stomp all over English ambitions of a Six Nations Grand Slam. It has happened in 2001, 2011 and 2017, with the chastening effects of Irish defeat earlier in the tournament largely subsumed by the national pursuit of beating England. (Of course, in 2003, England did secure a Grand Slam in Dublin, and denied us one in the process, but let's not mention that.)

Here, we remember these three occasions.

The conclusion of the 2001 Six Nations was delayed owing to the outbreak of foot and mouth disease, meaning Ireland had to muffle Grand Slam dreams for months after a rare win over France. These dreams foundered in a graveyard called Murrayfield, as Ireland were condemned to a 32-10 defeat.

Ireland recovered to beat Wales in October, meaning that all that was at stake for England's visit to Dublin a week later was pride. England, by contrast, had everything to play for: a clean sweep up to then set them up for a Grand Slam. They had blown a Grand Slam on the final day of each of the previous two years. In 1999 it was Wales; 2000 Scotland, and 2001 proved to be Ireland's year to bruise neighboring egos.

Ireland took the lead through Keith Wood in the first-half, as the captain started and ended a fairly rudimentary set-piece move that owed much to a delicate Axel Foley pass.

A Martin Johnson-less England were ragged and sloppy, to which the BBC put down to the fact that this was their first game together in six months. Ireland's lead was extended from the tee by David Humphreys, and the game was ultimately put beyond England's reach by Ronan O'Gara, who replaced an injured Humphreys.

Austin Healey's late try proved academic, and meant that England could only console themselves with the title along with records for points scored (229), tries scored (29) and overall points-difference (+149).

Beneath an Irish Independent headline bombastically declaring Ireland Slam The Auld Enemy, Karl McGinty captured the Irish exuberance about pissing off the English.

Ireland hi-jacked the Sweet Chariot on Saturday...and then went joy-riding down Lansdowne Road in it. Never before has an Irish team been able to perform a lap of honour at Lansdowne. And rarely in history has our national side been deserving of one...the Irish rugby revolution is back on track.

These days, the full-time scenes are straight from the Moral Victory Playbook.

The Irish players soaked in the exuberance of a crowd during this lap of honour, as U2's Pride in the Name of Love rolled from the terraces. England, who did leave with the actual trophy, were afforded some cursory applause as they lifted the trophy. We return to McGinty's report...

Further indignity awaited the England players as they stepped forward sheepishly for what should have been the crowning moment of their Six Nations championship - the presentation of the trophy. A wave of polite applause rippled around the arena as we Irish manfully to suppress a gleeful giggle at their discomfort.

England's next visit to Dublin ended in humiliation for Ireland, as the visitors finally won their Grand Slam. The Irish rugby revolution ended as many Irish rebellions had before - a moral, if not complete victory.

Once again England won the title on the final day, but again did so with the taste defeat still lingering in their mouths. Declan Kidney's Ireland had endured a poor tournament up to the visit of England, following defeats to France and Wales, prefaced by an uncomfortable two-point victory in Rome. The final true staging post ahead of the World Cup in New Zealand was the visit of England, who were once again Grand Slam a-huntin', having not won it since the ransacked Lansdowne in 2003.

Back then Martin Johnson was captain; on this occasion, he was coach and saw his side make a slow start, with Johnny Sexton kicking three penalties to push Ireland 9-0 in front. Tommy Bowe touched down to give Ireland a 17-3 half-time lead, before Brian O'Driscoll scored to make him the championship's record scorer. Ultimately, Ireland ran out comfortable, 24-8 winners.

Once again Ireland were left to bemoan earlier shortcomings, although the Wales defeat turned on a deeply controversial try. England did not have to endure a similar indignity to a decade earlier, as they had to wait until France's victory over Wales to confirm championship victory.

But their Grand Slam ambitions were shipwrecked again, with the Sunday Independent's Neil Francis reflecting that this was always inevitable.

They say death and taxes are inevitable, but death doesn't get any worse every time the Dáil meets on Budget Day. It was inevitable that Ireland were going to ruin England's day and for Martin Johnson, every time he watches the video of this game it will get worse and worse.

Francis meditated on the fact that Ireland ultimately ended the tournament with nothing but the satisfaction of beating England, and hinted that playing Keith Earls at full-back made the difference.

We cannot get away from the fact that Ireland have lost out on a Grand Slam. Small margins and the difference that Keith Earls at full-back set themon their way to partially absolve them from their former sins.

Much was made of the effect this heartening victory would have on the World Cup, and ultimately it was negligible - Ireland lost a quarter-final yet again. England, meanwhile, did the same.

Following back-to-back titles for Joe Schmidt, England belatedly rose to the Irish challenge by employing Eddie Jones on the back of his World Cup heroics with Japan. England secured back-to-back titles as wins began to elude Schmidt for the first time. Jones' England, by contrast, picked up a Grand Slam in 2016 and came to Dublin last year seeking another.

Jamie Heaslip forced out of the warmup with an injury that has ultimately forced his retirement, with his replacement Peter O'Mahony picking himself off the bench to dominate a game that ended in a 13-9 Irish victory, with England's challenge ended with a clumsy knock-on by Mike Brown.

England had even more at stake than a second successive Slam: they were going for a world record of consecutive victories, having drawn level with New Zealand's record a week earlier with an almighty battering of Scotland. But all was smithereened in Dublin, with Eddie Jones hailing the Irish for performing "superbly", although was mischevious as to whether the late introduction of O'Mahony was part of a grand, clandestine plan. "Maybe a leprechaun tackled him in the warm-up...I don't know" remarked Jones. That has since proven to be untrue, and Alan Quinlan's post-game column for the Irish Independent in which he questioned if this was the end for Heaslip proved to be sadly prescient.

While Schmidt struck a tone of regret regarding earlier failures, the ambient tenor suggested this was a result worth savouring as England had to lift the trophy half-apologetically.

Away from the hailing of Ireland's Slam Busters, Vincent Hogan wrote lyrically in the Irish Independent of that most of seductive narratives: English hubris.

England on a pedestal just can't seem to help themselves. They get drawn to hubris like sailors on shore leave so distracted by a lifted hem they forget what time their ship is sailing. It seems a lack of adult self-awareness through which they might recognise this is a story that keeps repeating itself.

Jones didn't re-invent England. He just made the mistake of feeding the very conceits that weaken them. Between his pre-game parodying of Ireland's tactical limitations musing how Warren Gatland might, wisely, bring six England front-rows to New Zealand, England's sense of superiority was all but pasted across a billboard. And maybe the most revealing quote came from Billy Vunipola. "It's amazing how emotionally charged Ireland were today".

Really? You could imagine England never previously came across an Ireland team with a chip on its shoulder. When they next gather for a trip to Dublin, the chariots should scrap all video analysis and just sit down and watch something like The Wind That Shakes The Barley.

Of course, a year later, England would attempt to return the favour in Twickenham and would fail. Ireland haven't beaten them since. But they also haven't played them on this most holy of occasions - St. Patrick's week, with the Six Nations coming to an end. In other words, on Ireland's terms. 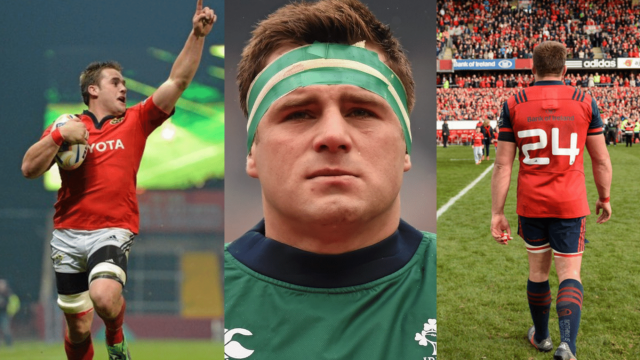