Far From Dreams Of World Cup Glory, Ireland Are Hurtling Towards Disaster

What can you say about that? Less than 12 months on from being pegged as World Cup favourites after their win over New Zealand, Ireland are in disarray.

The signs were there in the Six Nations that something was not right. Of course, even the best teams can falter over a five game tournament, but can we now accept that there has been a remarkable dip in standards for this Irish side?

A 57-15 defeat to England is a true embarrassment, regardless of the circumstances. You can say it was a warmup game, that fringe players were given the chance to impress, that first choice players were absent. You'd have a point, but that should not result in the abysmal 80 minutes we have just been forced to sit through.

With perhaps the first 10 or 15 minutes aside, Ireland were absolutely dominated in every facet of the game. Their defence was atrocious, with Jacob Stockdale being caught out of position on all three of England's tries.

By half time, a hammering felt like an inevitability. Some of the stats at the interval did not make for pleasant reading.

A damning indictment of Ireland's defensive effort in that first half #ENGvIRE https://t.co/5pQzb9mru0

Things only got worse in the second period as the mistakes continued. Here's some telling comparisons from the end of the game.

The defence was woeful, the attack was stagnant. The intensity was lacking and the concentration levels were at rock bottom. This was a warmup game, but it may well be a sign of the disappointments to come.

Where do Ireland go from here? The World Cup is a matter of weeks away, and this team is at its lowest point of the Joe Schmidt era.

Far from the days of being named tournament favourites, there is a real chance they will not get out of the pool if this slide continues. Scotland would have beaten Ireland today, Japan probably would have too.

The only positive from today is that Cian Healy's ankle injury does not seem as serious as initially feared, with no sign of a fracture but merely a sprain. 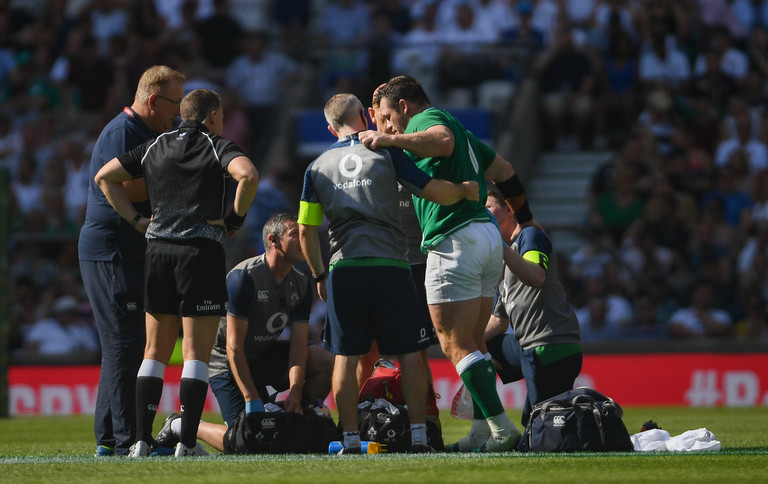 Ever since Schmidt announced his departure from Ireland, things have been trending in the wrong direction. You can't really blame him for the timing of that announcement, and having questions about his future hanging over the team could have been equally damaging.

This may only be a World Cup warmup game, but it is the result of steady decline. Turning things around now at the drop of a hat will be no easy task, with the rot seemingly well and truly setting in.

Maybe the start of the tournament in Japan will be just what is needed to get the pep back in the step of this Irish team. We can only hope the big stage will bring with it a return of big performances.

There's two games against Wales coming up to get things right, after that there will be no more excuses.

For now, we can forget about South Africa or New Zealand. Worry about Scotland and see where things go from there. It is a pessimistic view, but that's the reality.