Last weekend only one team had a 100% success rate in the line-out. It was a facet of the game Ireland and forwards coach Simon Easterby can certainly be proud of.

After the Six Nations in 2015, Easterby cut a frustrated figure when asked about Ireland's lowly line-out success rate. They finished that year with an 82% success rate, the second lowest in the tournament.

Approximately 25% of a team's opportunity to gain possession comes through the line-out. That is why coaches dedicate so much training time to the set-piece. Ireland's success is reliant on two main things: Timing and movement.

The very first line-out against Scotland in Murrayfield is a perfect example of both.

Every attacking team must indicate how many players will stand in the line-out. It has to be a minimum of two players. Each team can have a receiver, usually a scrum-half, while the defending team must also have a player between the touchline and the five-metre line. This player is usually a hooker.

Here's what World Rugby's law book illustrates as a line-out. 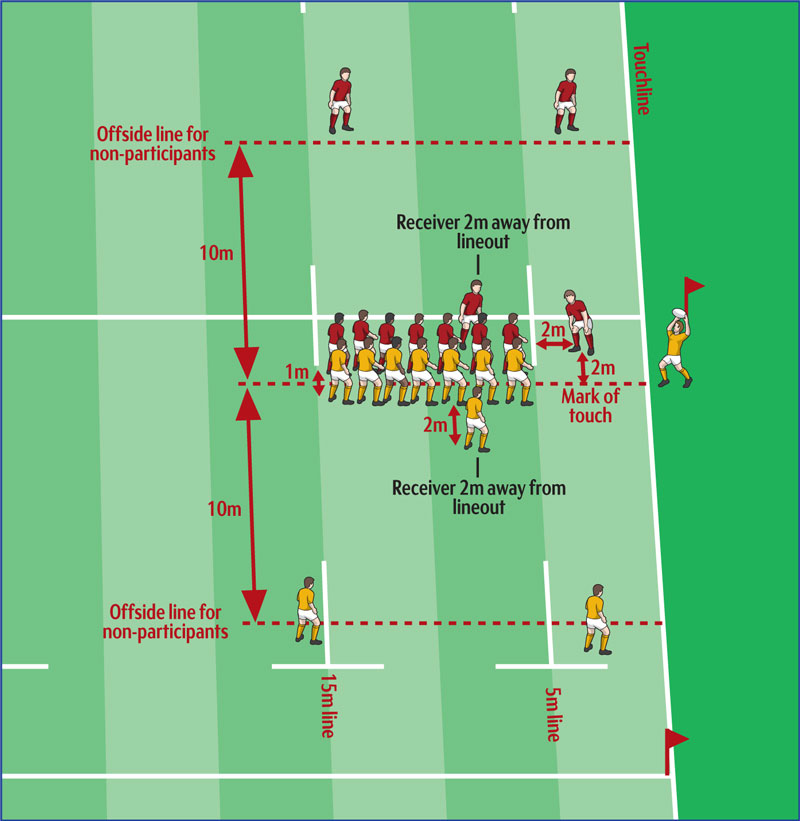 In the first minute, Ireland call a four-man line-out. However, there is a twist.

It is a four-man line-out, with Furlong acting as scrum-half. 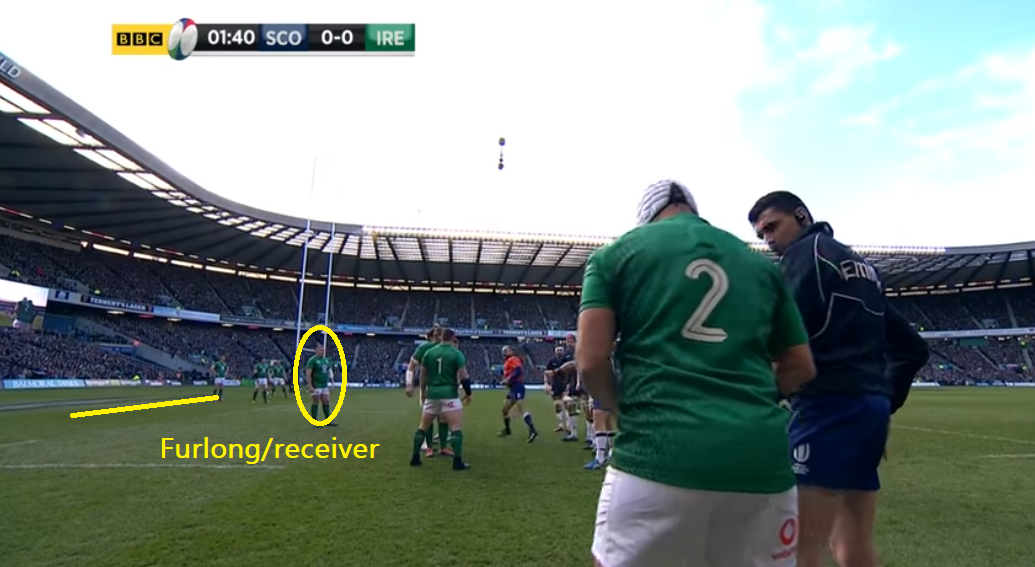 Scotland use Jamie Ritchie (circled) to mirror Furlong, with Laidlaw standing in on the inside channel. Notice the space behind the jumper, James Ryan. 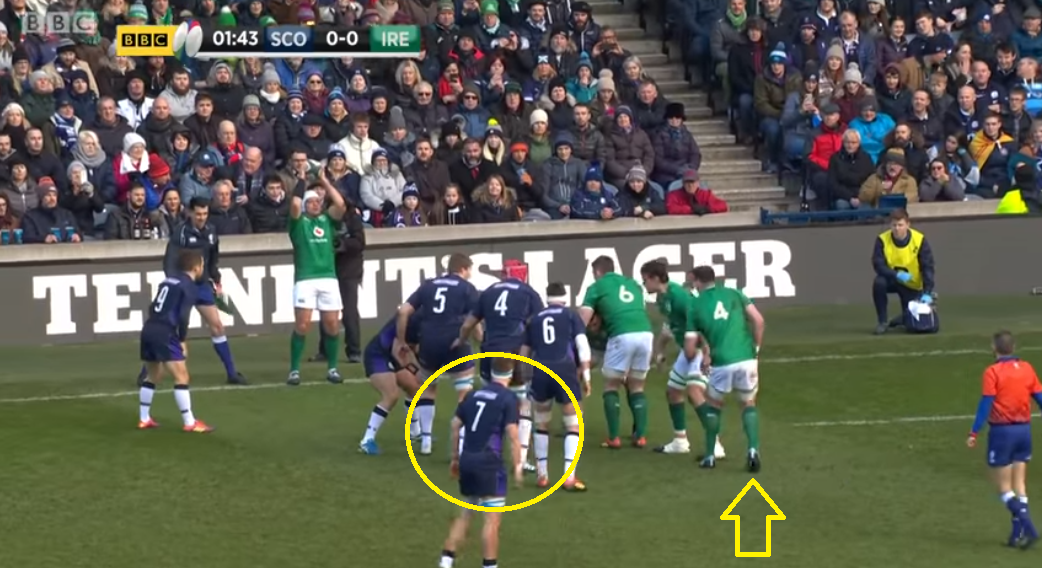 Furlong (circled) sprints in to lift at the back. This creates a new 'pod' of two lifters and a jumper. Scotland do not have enough time to counter as Ritchie fails to respond to Furlong's movement. At the same time, Conor Murray must make up ground to take the ball off the top. 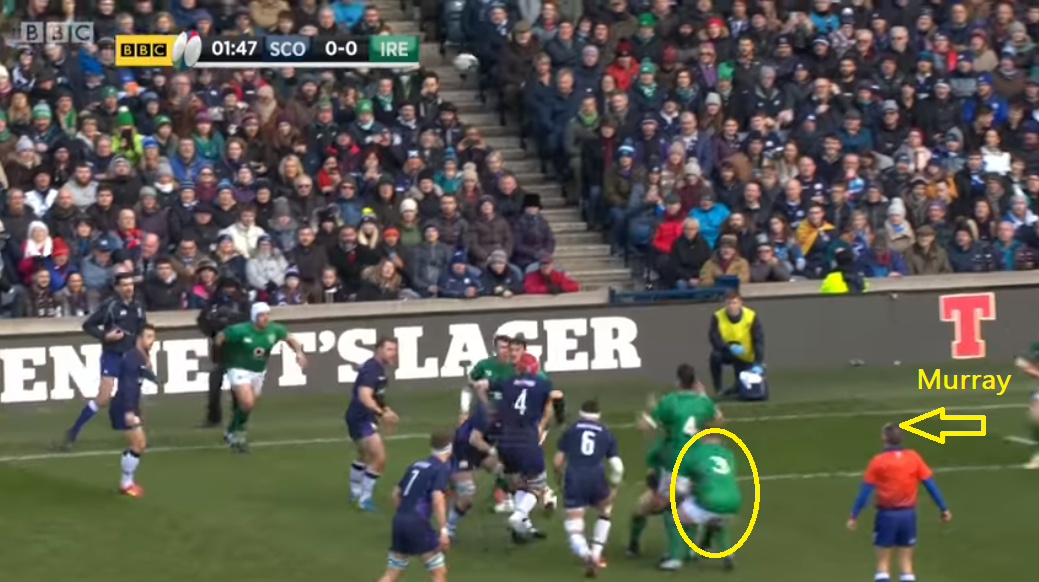 Despite the space, Murray makes it up to take ball. Ritchie now tries to respond and shoot up, his second mistake in this phase.

Murray passes to Sean O'Brien. Ritchie hasn't responded to Furlong's movement and he misreads Murray's pass. In the end, the Scottish openside falls between two stools and Sean O'Brien breaks through to carry all the way to the '22. 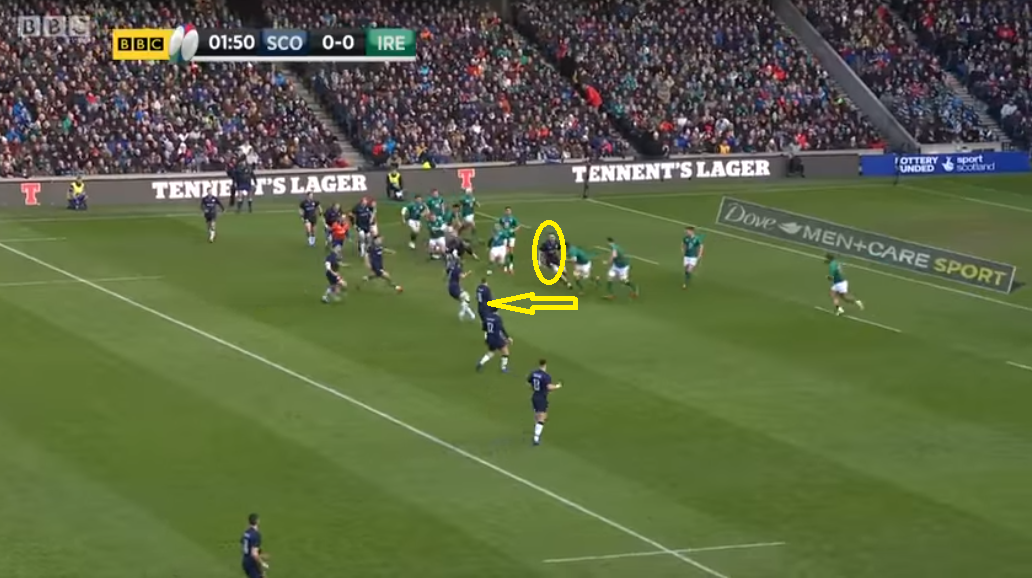 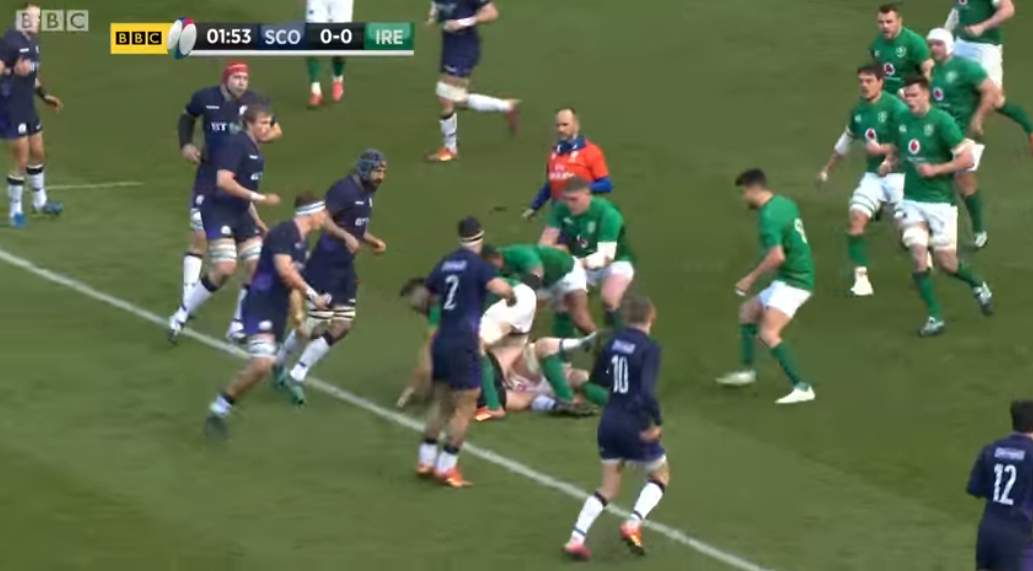 The key to this phase is Ireland's timing throughout the set-piece and their manipulation of Scotland's response.

A team can only respond to what they see. By using Furlong, who enters late, Scotland can't even counter against the pod because it doesn't exist until then.

A phrase repeatedly used during Joe Schmidt's reign is 'animation.' Irish players not directly involved in the play still need to look like they will be involved to occupy their opposition. A fine example of this comes in Ireland's use of Conor Murray in the line-out.

Jacob Stockdale's superb strike play try came from a line-out. Interestingly, Conor Murray was placed at the front with his hands up. This is a new addition that Allan Dell is clearly confused by.

Murray has his hands up, but the ball is going to Peter O'Mahony. 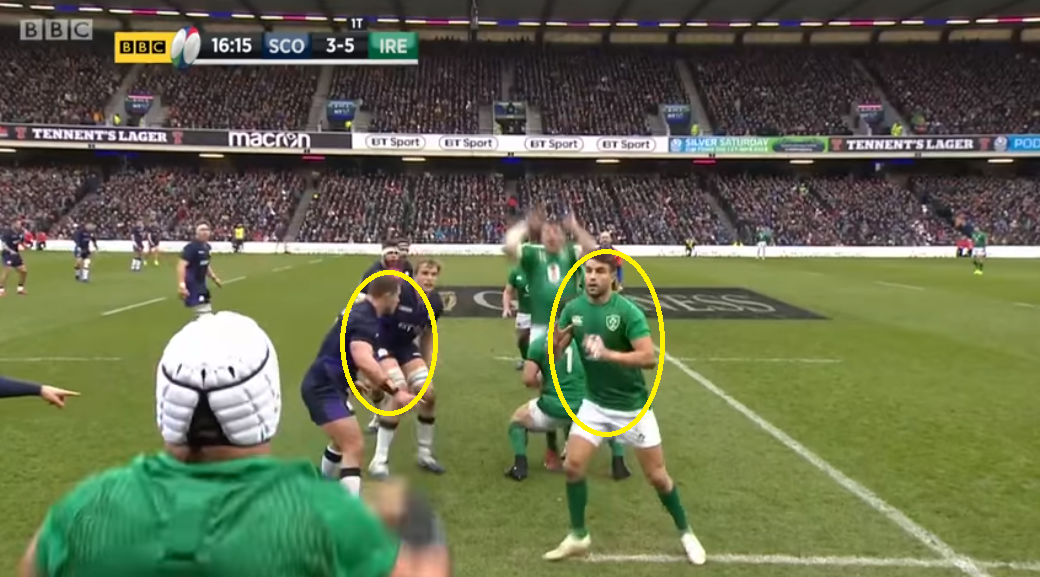 Scotland try and get a jumper up, but Dell misses his lift because he was preoccupied with Murray's positioning. 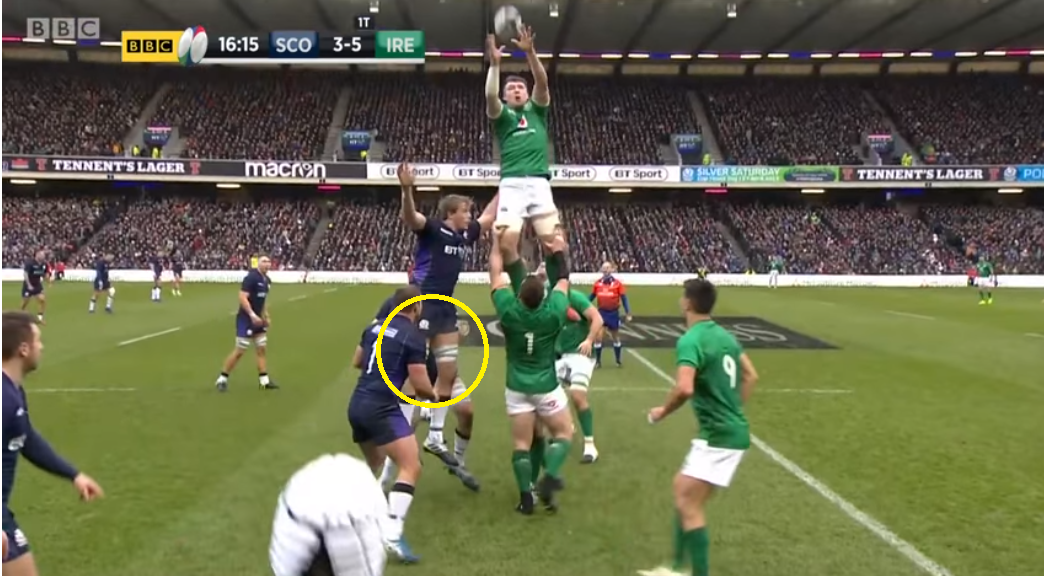 O'Mahony takes the ball to ground and then pops it to Murray. Sean O'Brien is now the clear target and Scotland are occupied by him. The entire defensive line is looking inwards towards the Irish flanker. 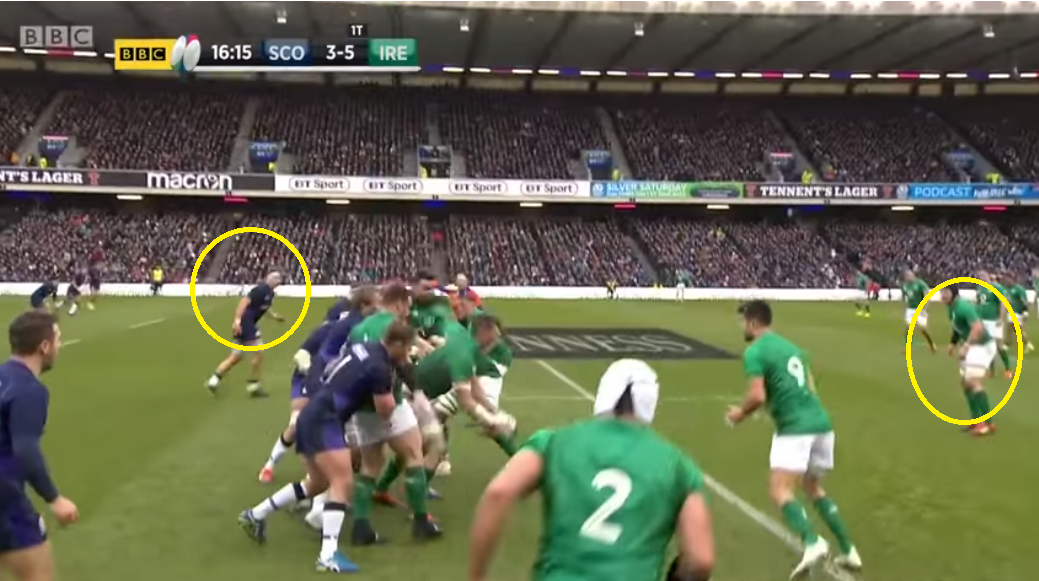 O'Brien receives and throws pass out the back to Sexton. Once again, Ireland get go-forward ball. 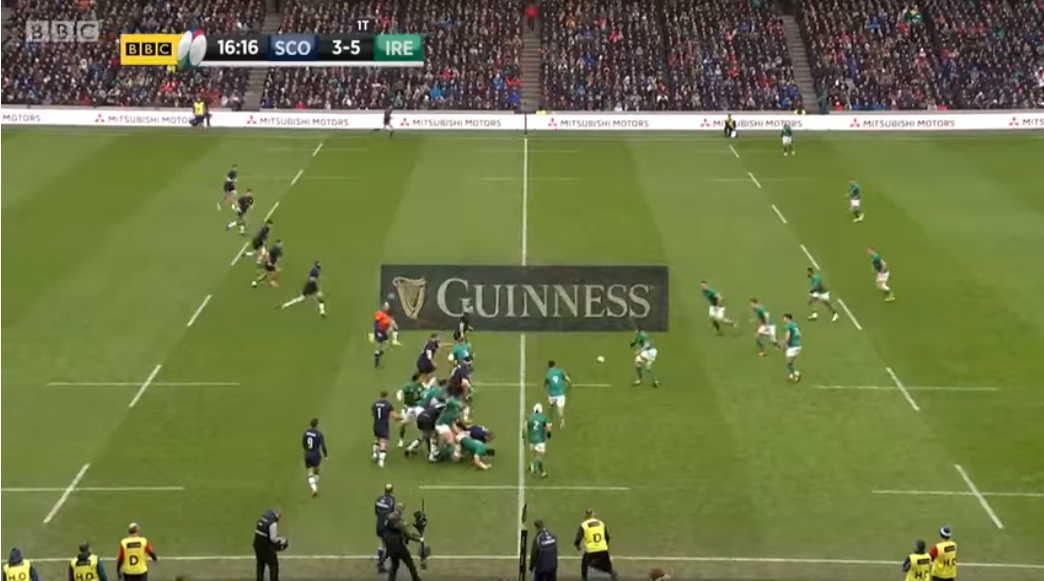 This is the platform from which Ireland launch their clever strike move.

Ireland have utilised Conor Murray in the line-out previously, including as a jumper. This time his function is as a decoy. James Ryan and Peter O'Mahony are both in the top five line-out receivers in this year's Six Nations. Conor Murray ensures the opposition are kept guessing. When a tactic works so effectively, it would be remiss not to use it again.

As it turns out, come the second half Dell had not learned his lesson.

Conor Murray is again at the front with his hands up. 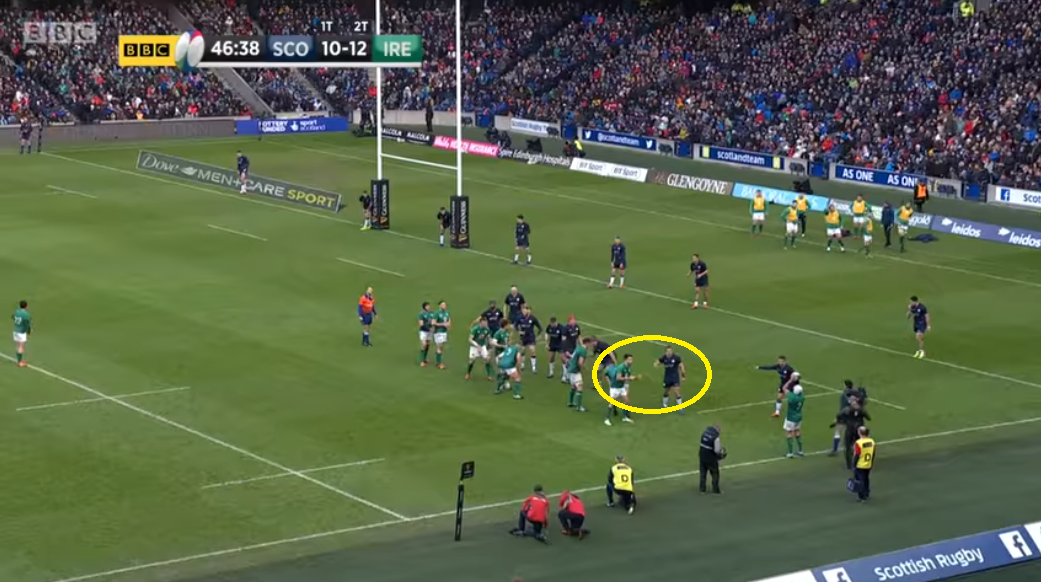 Dell is totally occupied by Murray, with his gaze fixed on him. This time, Laidlaw (pointing) spots the decoy and tries to tell his team-mate to get back with his jumper but it is too late. 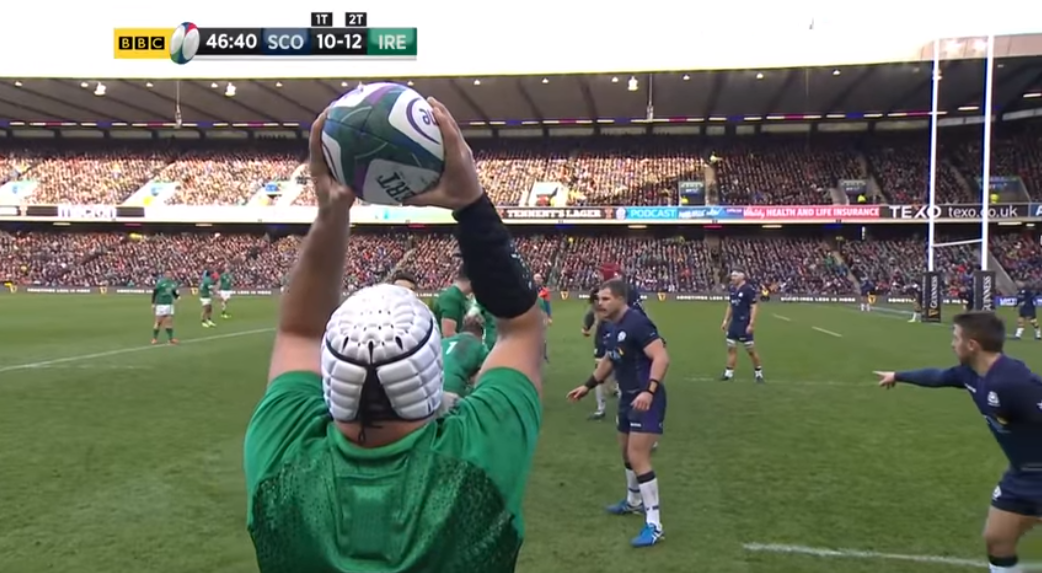 Once again, Scotland try to get a jumper up but Dell misses his lift. 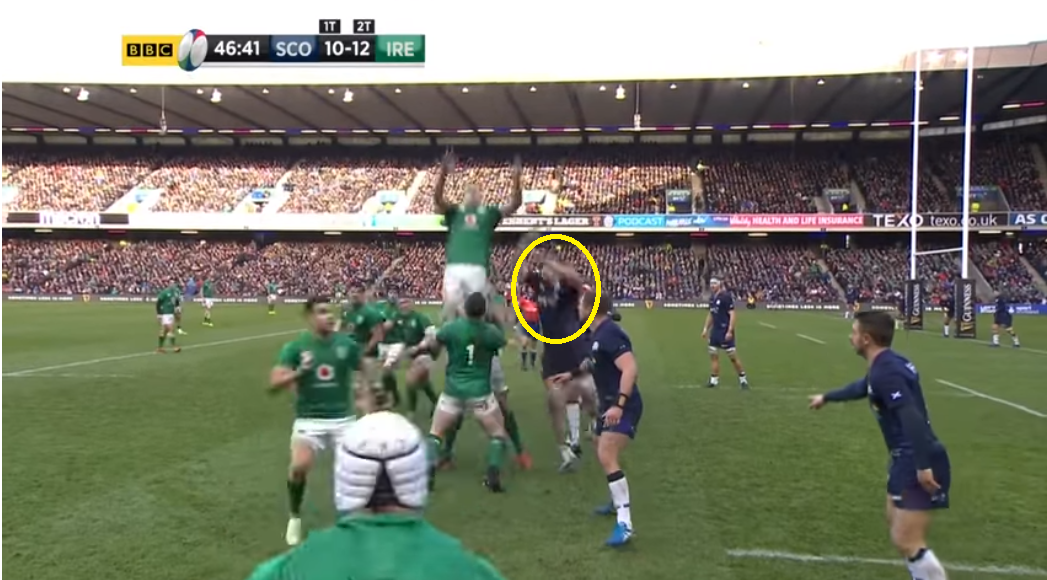 While their play in the loose was, well, loose, Ireland's tight play and work in the set-piece was markedly impressive and a vital platform throughout the game.

Do not be surprised if eventually, Rory Best throws to Conor Murray at the front either.