"Ahh Yes, The Raaagby" - Plenty Of Romans Wouldn't Care If Italy Were Banished From Six Nations

After Garry Ringrose's scampered under the posts to register his second international try, I noticed the gesticulations of the Italian woman sitting two seats to my left. There was an empty seat between us. She was half-laughing and half-sighing. She briefly held her head in her hands and peered through her fingers. She turned to her right and nodded wearily at the woman beside her.

Even the most triumphalist Ireland fan was feeling some sympathy for the Italian supporters by that point. When I caught her eye, I said "no more, that's enough!" Taking the cue, she waved her arms and exclaimed, in a deliberately exaggerated wail, "No more! No more!"

But Ireland scored two more tries after that.

"WE DON'T DESERVE TO BE IN THE SIX NATIONS ANYMORE"

The Italian media unloaded on their rugby team last weekend. "We Don't Deserve To Be In The Six Nations!" screamed the headline above Francesco Volpe's opinion column in the Correire Dello Sport.

It's an opinion that has gained greater credence in past year and a half as the Italians have fallen into what is a trough even by their standards. The meritocratic case for promotion/relegation will become hard to resist should events continue on the same trajectory.

Things have gotten so bleak that Italian newspaper columnists - admittedly always a provocative, contrarian and self-flagellating constituency in every democratic country - are tossing their hands in the air and advancing the same argument.

Italy haven't been the only target of the evangelists of promotion/relegation. After Scotland's 20-0 home defeat to England in 2014, the Daily Telegraph's Paul Hayward demanded to know what the Scots were bringing to the party and asked what right they had to be elevated above Georgia. Three years down the line, this opinion already looks very dated. Maybe by 2020, the calls to banish Italy to tier 2 could look similarly dated though few would bank on it.

Italy have endured many black days and eye-watering defeats since joining the Six Nations in 2000, though they haven't been whitewashed as often many appear to think. Only six times in 17 years. The hope for both Italy and the Six Nations committee - who really don't want this debate to be cropping up - is that Saturday's game against Ireland will represent the historic low-point for Italian rugby.

Incidentally, Georgia, whom an Irish second string beat 49-7 in their last meeting, are invariably painted as the victims of the petrified Six Nations cartel in this particular argument. They are universally accepted as the first reserve, perennially seeking admission to European rugby's elite in much the same way that the Irish cricketers seek to be elevated to the ranks of Test cricket playing nations. 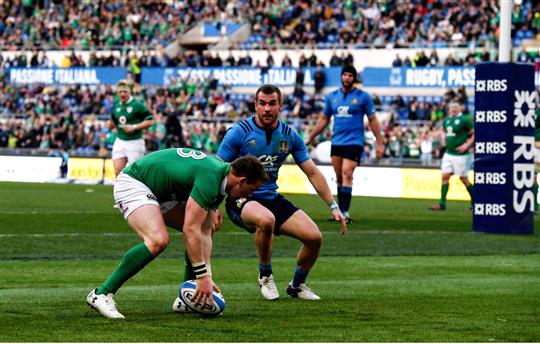 Georgian Rugby's Head of Operations told the BBC recently that he would like to see a 'show match' between the bottom placed team in the Six Nations and the winners of 'Rugby Europe', the second tier competition in Europe which is almost always won by Georgia. John Feehan, the Six Nations CEO, openly admitted that he was apprehensive about the effect of such of fixture, expressing concern for the "integrity" of the Six Nations. He said such a fixture might "involve all sorts of speculation which mightn't necessarily be helpful."

This has been taken as an open admission that the rugby authorities are fearful of the implications of Italy losing to Georgia.

Another question altogether is whether enough Italians would care if their team was banished from the Six Nations. Clearly, there are passionate Italian rugby fans, many of whom were in the Stadio Olimpico last weekend, belting out their national anthem with an intensity which was both frightening and theatrical.

After the match, the beautiful practice pitch adjacent to the stadium, which is encircled by naked statues of Roman warriors, was full of Italian kids throwing rugby balls around. In time, they were joined by a few shades-wearing Irish fans in their 20s and 30s, who proceeded to hog the balls for a bit and try speculative drop goals.

Italian rugby seems to be working hard to get them young, an impression strengthened from watching Sky Italia's coverage of France-Scotland. The pundits were the magnificently haired duo of Mauro Bergamasco and Paul Griffen, who still sports 19th century style mutton chops. The programme - called 'Rugby Social Club' - has a live studio audience and at half time the presenter invited forward a 12 year old boy to ask a question of the pundits. We're not in a position to assess the quality of the question, as the show was not subtitled. The boy was then invited to tackle Bergamasco, who dutifully hit the floor as if he'd just been nailed by Scott Gibbs.

Filing out of the ground, we noticed a bullish message from the staff to Italian coach Conor O'Shea.

"O'Shea: Your Derby, Your Chance!" 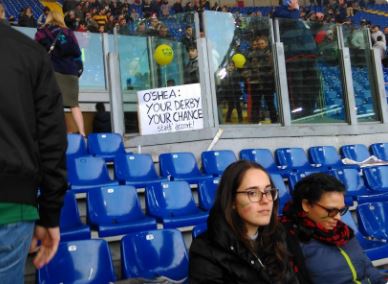 But none of that can hide the fact that the ground was only three-quarters full and that the away support accounted for a substantial minority of that.

It's accepted that Italian rugby's heartland is in the north of the country. But it was still depressing to find so many Romans ignorant of the fact that there was a rugby match going on that weekend.

"Ahhhh Raaaagby!" many would exclaim after 30 seconds of having tried to explain to them why you were in town.

The closer one got to the ground, one found greater awareness that there was a rugby match being played. But still Italian rugby fans were very rare on the streets of Rome that evening. It'll come as no surprise that the sport is dwarfed by calcio in the Italian capital. It doesn't even live in the same stratosphere. A bar owner and ardent Lazio fan called Claire had put out Irish flag to attract passing traffic. Their home match with Milan was pushed back a night to allow the pitch time to recover from the rugby. Claire's partner was a Roma fan, incidentally, though she had no idea where they were playing at the weekend.

After the game, the Irish contingent - which in Rome seemed to contain a disproportionate amount of English-born lads for some reason, at least in this writer's experience - were understandably blase about the mammoth victory. Everyone retired to a nearby restaurant (there aren't so many pubs in the vicinity) to watch Wales-England.

The biggest attraction, incidentally, was a spectacle which we shall call 'the worst parked car in the world'.

"THE WORST PARKED CAR IN THE WORLD"

By the Mancini tram stop in the area of Flamini, where the Irish support congregated after the game, there was a small car parked more or less in the middle of the road right alongside a zebra crossing.

This bit of parking provoked a fair degree of wonder among the travelling support. One Irish fan was gesturing passers-by in green to come and look at this extraordinary sight. Within a few minutes, Irish fans were taking selfies with the parked car.

In Ireland, the car would have been towed away and consigned to scrap-yard, eventually being posted back to its owner as a piece of scrappage the size of a rubik's cube. The Roman traffic authorities just said "pfft" and walked on.

One wonders whether the traffic authorities in Tblisi are so tolerant.

Read more: Only In God: Balls.ie Experiences The Splendour Of Schools Cup Rugby

Football
1 week ago
By Eoin Harrington
How To Get ITV In Ireland For The FA Cup Final
Rugby
1 week ago
By Colman Stanley
Eimear Considine: 'We Need Depth Because We Were Matching England'
Rugby
1 month ago
By PJ Browne
Ireland Pick Up First Six Nations Win After 'Tough' Few Weeks
Popular on Balls
GAA
2 days ago
By PJ Browne
Cusack Has Little Sympathy For Gearoid Hegarty After Red Card
Football
7 hours ago
By PJ Browne
Man Arrested For Headbutting Billy Sharp After Playoff Semi-Final
GAA
1 day ago
By PJ Browne
GAA President Explains Why Tailteann Cup Won't Be All-Ireland Curtain Raiser
Football
3 days ago
By Eoin Harrington
Alan Shearer Says Roy Keane "Ran Away" From Him After Famous Clash