What. A. Performance. There was a quiet sense of optimism ahead of Ireland v New Zealand that Ireland could put it up to New Zealand at the Aviva Stadium this afternoon, but few could have predicted just this level of performance from the likes of James Lowe, Caelan Doris and the rest of the Ireland team.

Andy Farrell's side were absolutely immense right from the first whistle, outplaying the All Blacks in every aspect of the game. The 29-20 scoreline in no way flattered Ireland, who in all truth should have won by a much wider margin.

The second half was amazing to watch. Having gone into the interval trailing 10-5 despite being the better team, they showed incredible character to overpower the All Blacks in the second 40 minutes.

See Also: Player Ratings As Ireland Beat All Blacks With Performance For The Ages

It gives this team a template to work off moving forward. Whereas they often looked rudderless and lacked direction early in the Farrell era, they are now playing like a team with a real identity.

One man who will be especially proud is James Lowe. Born and raised in New Zealand, he grew up dreaming of playing for the All Blacks. He would instead end up as an Ireland international, a title he seems immensely proud to hold.

The winger was incredible this afternoon, scoring one try and helping to force a potential decisive turnover late in the game. It was a massive occasion for a player who has come in for some criticism in recent times. Not surprisingly, James Lowe was in giddy form after the match

Speaking to Channel 4 after the game, James Lowe summed up just how special it was to beat the nation of his birth in a test match. He also had a message for the people who had been criticising for his apparent lack of impact on the defensive side of the game.

🗣 "Never in a million years could I have thought this day would come!"

It's amazing. Never in a million year could I have thought this day would come.

Ever since I was a kid I had dreamt of being an All Black, that's just a very Kiwi thing to do. I gave up that dream, I wasn't quite good enough when I was at my best almost.

To be able to come over here and put in a performance against the best team in the world, they are the standard-bearers, words can't describe it. To hear my native country's national anthem, to stand in front of the Haka, it's a childhood dream...

You bollockses always talk about my [defence], and I got up and I worked Rieko (Ioane), and we got the turnover from it.

Quite the interview from Ireland's James Lowe. Here's hoping this is only the start of great things for him in a green jersey.

SEE ALSO: All Blacks Hooker Gets Telling Off From Referee For Johnny Sexton Comment 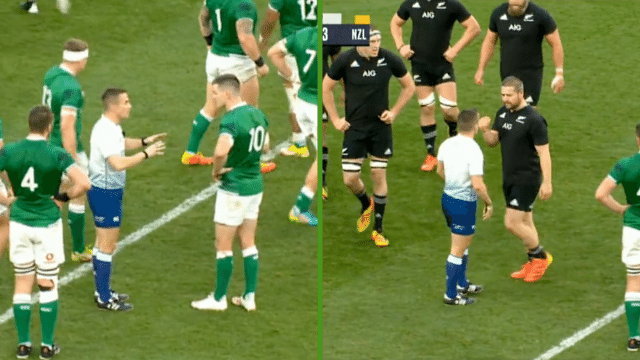