Ireland kicked off their Autumn Nations Series in front of their fans at the Aviva Stadium, with an emphatic 60-5 win against Japan. In what was a bold selection for coach Andy Farrell, which saw the benefits of the positional combinations of a mostly Leinster based team. Ireland’s pace and power were all too much for Japan’s defence, with Ireland adding offloading skills to their attack. Here are our Ireland player ratings from the big result.

Keenan getting better the more he wears the Ireland 15 jersey. His aerial skills were outstanding and he constantly looked to get on the ball in attack. Great pass to put Conway away for the 3rd try.

Great performance from Ireland’s hat-trick hero was excellent in all areas of the game. On the receiving end of a truly wonderful 11th-minute try.

Here is that stunning Andrew Conway try that put Ireland into a wonderful position early on.

His defensive performance was as good as you will see, snuffing out any threat from Japan. Great offload for Gibson-Parks try in the 1st half. Got over for try number 7.

Was a handful for the Japan defence and provided the team with a directness in attack by continually crossing the gain line. Got over for a nicely finished try in the 2nd half.

Silenced his doubters with an early try and was central to everything good about this Ireland performance. Industrious performance with him working continually off his wing.

Masterfully conducted the attack all day, with a dominant pack providing him with the quality of ball that he just loves. Loads of time and space to do as he pleased and how he enjoyed his 100th cap, topping it off with a try, four conversions and a penalty.

You love to see it - Johnny Sexton scores a brilliant try - followed by a trademark roar - in his 100th Ireland matchpic.twitter.com/LRW7WVjYZb

Selected to pace up the attack and had an armchair ride by his pack all afternoon. Kept the attack moving by moving the ball quickly and effectively.

The switch from reserve tight-head prop to starting loose-head prop will hopefully serve this team well in the next 2 years and on today’s showing. Good all-round performance with an excellent penalty win early in the 2nd half

With Sheehan breathing down his neck for selection, Kelleher showed his class with an outstanding 1st half performance.

Good hit out for this world-class player – his scrum work, lineout lifting, Ball carrying continue to be of the highest order. Great line-break and offload that led to Ireland’s 6th try.

His athleticism cannot be understated. He was a constant pest for the Japan attack by slowing down the speed of their rucks.

Back to the James Ryan of old with a sharpness that was missing for the last 12months. Dominated the lineout. 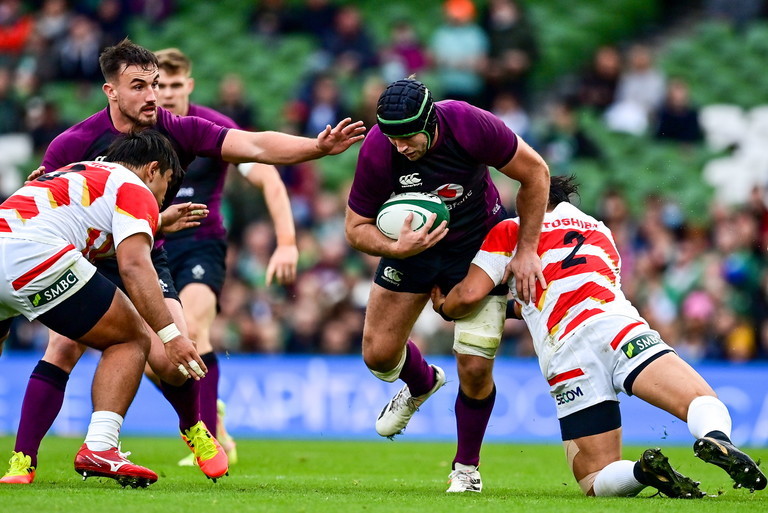 6 November 2021; Caelan Doris of Ireland is tackled by Atsushi Sakate of Japan during the Autumn Nations Series match between Ireland and Japan at Aviva Stadium in Dublin. Photo by Brendan Moran/Sportsfile

Another huge physical 80-minute performance by the Leinster backrower. Got through a huge amount of work with 12 tackles and 11 ball carries.

Very good performance by the Ireland openside. His ball carrying skills are now a huge asset to Ireland’s attack.

Ireland’s top ball carrier with 15 carries. Ireland’s attack use him in the wider channels where Japan struggled to deal with his powerful running and ball skills 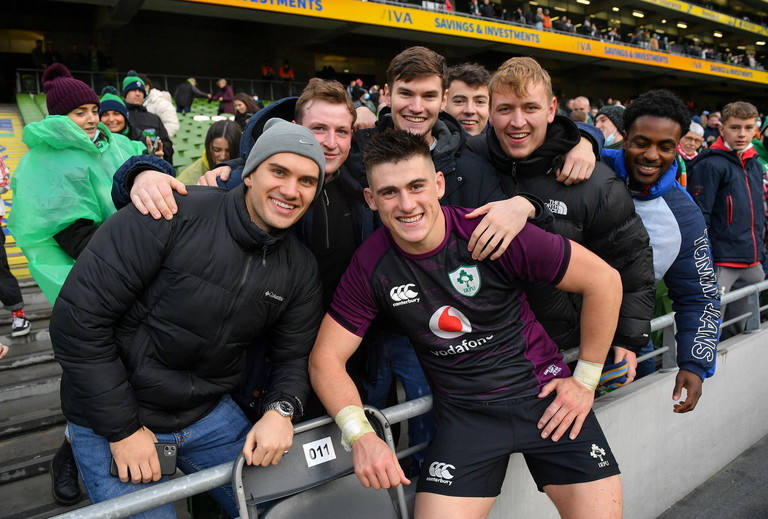 6 November 2021; Dan Sheehan of Ireland after the Autumn Nations Series match between Ireland and Japan at Aviva Stadium in Dublin. Photo by Ramsey Cardy/Sportsfile

A proud day for the young Leinster man (& his family) who entered the international stage for the first time. Showed huge energy when he came on with some good Ball carries from 2 Japan lineout overthrows.

Got on the score sheet in his 110th cap. Continued Ireland’s set-piece dominance

Worked hard in his 26 minutes on the pitch.

Made a big impact off the bench. Came on as Japan started to get onto the ball more and made some important defence reads.

Seemed to try too hard when he came on. He’ll be disappointed with the 2 silly penalties. Lovely take from a restart. His lineout work was his usual high standard.

Good to have his experience off the bench. Intelligent kick to assist for Conway’s 3rd try.

Showed some nice skills when he came on. Needed to make smarter decisions with the talent around him. His goal kicking will need to improve at this level.

Showed his versatility by coming on in the centre. Showed some nice touches in his 10minutes work.

A good day at the office for Andy Farrell and his coaches. The pace and offloading skills in the attack was a joy to see. There were some excellent attack patterns and slick passing and lines of running.

SEE ALSO: Emotional Johnny Sexton Savours 'One Of The Best Moments' Of His Career 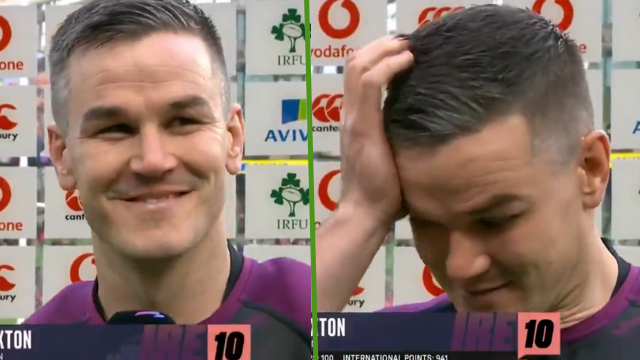