Fire and fury in Fukuroi. Ireland's World Cup woes has another chapter. Joe Schmidt made it clear they could not underestimate the Japanese challenge and those concerns were well-founded. Jamie Joseph's side were well-coached and clinical. In sweltering conditions, Ireland struggled for air.

Eventually, Japan ground them down and choked them out. 19-12. A magnificent result for world rugby and a horrific one for the Irish.

It started with a Jack Carty kicking clinic. The end result was two tries that came during penalty advantages. Garry Ringrose's catch in the corner and Rob Kearney's claim from a Carty knockback had Ireland 12 to the good. Yet some breakdown indiscipline and interesting interpretations of the ruck allowed Yu Tamura to keep Japan in touch. 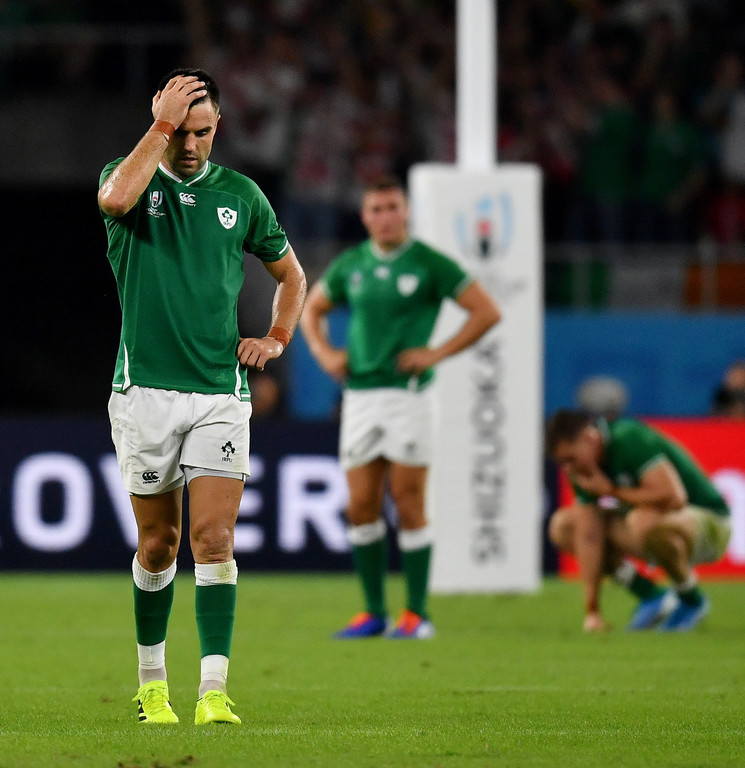 From there they launched a lethal, relentless assault. 38-year old Luke Thompson launched himself into a jaw-dropping 19 tackles. His lock partner James Moore outdid him with 20. Wave after wave washed a drenched and desperate Irish effort.

When Kenki Fukuoka touched down after the hour mark Schmidt's outfit were on the ropes. By the time Tamura added another penalty they were on the floor.

They were finer, fitter, fiercer. Japan go top of the pool, Ireland were lucky to escape with a losing bonus point.

Typically strong in covering the backfield and a big tackle right at the start. Only two more tackles but not required outside of that. No impact in attack.

Plenty of early involvement and cut in off his wing on several occasions. Superb covering chase at the very end but the grim reality was at that stage, Ireland were fighting for a losing bonus point. 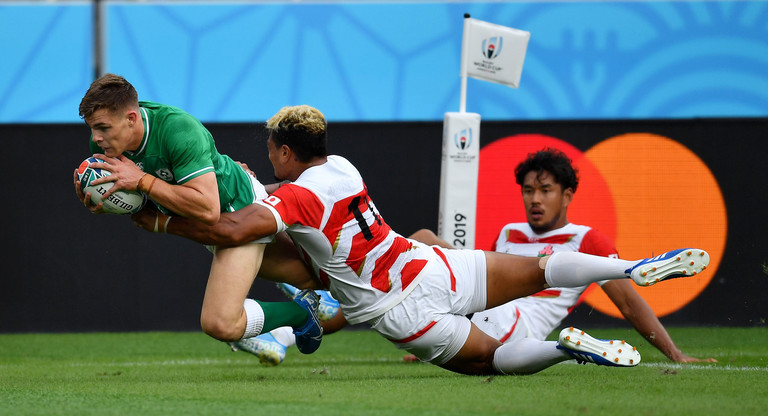 Couldn't do it on his own. Started the game with Ireland's first linebreak and kept them keeping thereafter. It was his break which led to Ireland's penalty advantage and after starting the move he finished it with a sensational catch in the corner after a gorgeous Jack Carty crossfield kick.

Marshalled the edge defence expertly against a team well capable of playing expansive rugby. On the other side of the ball, seven defenders beaten.

Sat down a swift defensive line on more than one occasion with his hard carrying. Not as many breaks or offloads this week but brought power and presence on both sides of the ball.

Very nearly caught out of position early on but got lucky with the bounce of the ball after a chip in behind. Three tackles, one missed. No defenders beaten, no clean breaks.

What a crossfield kick. The Connacht man cut a figure ready for world stage and played creator for the opening two tries. Faded from the game massively after that and some poor execution crept in. Here's the thing, when you kick against a team like this you have to put it out. Otherwise, they'll hurt you.

Game management was a major issue in the second half and the responsibility for that has to fall to the half-backs. Played into Japan's hands and were made to pay.

You could tell how serious Japan took the scrum by their pack's positioning. All eight forwards were packed down and driving forward, the back row was locked on. Ireland never gained the upper hand and were pipped once in the first half. Healy looked seriously fatigued in the second half and replaced by Dave Kilcoyne after 45 minutes.

Mishit one lineout in the first half with a big overthrow and another in the second. Seven tackles with one missed. It was never likely that he would play another full 80 minutes and the captain left on the hour mark, meaning Ireland were down three of their captains. That told. 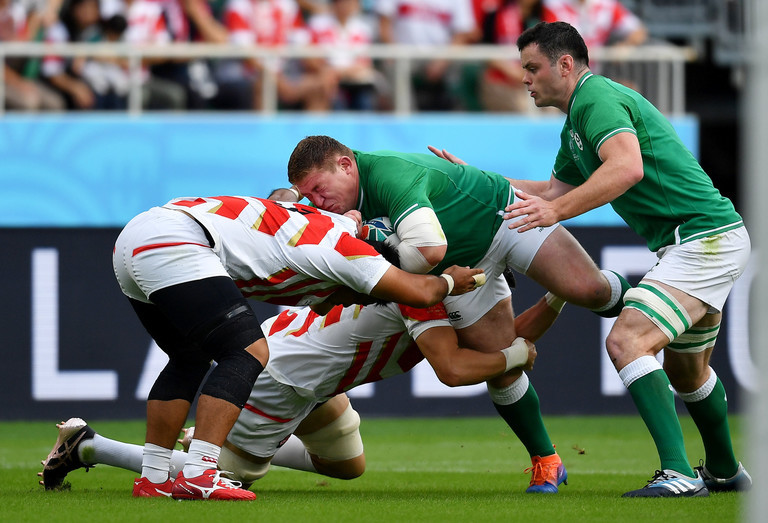 After all the talk about scrummaging before the game, we saw the unusual sight of Furlong routed at one set-piece in the first half. A quiet shift in attack with five carries for two metres. Replaced by Andrew Porter after 45 minutes for a HIA but came back nine minutes later before finally leaving before the hour mark.

Undoubtedly a top-class player but Ireland needed more from their engine room. Never imposed himself in attack or defence and ultimately at a World Cup, Ireland need more. After such a strong shift last week and in these conditions, it was always going to be a challenge and perhaps more rotation was required.

Tadhg Beirne came on after 65 minutes. 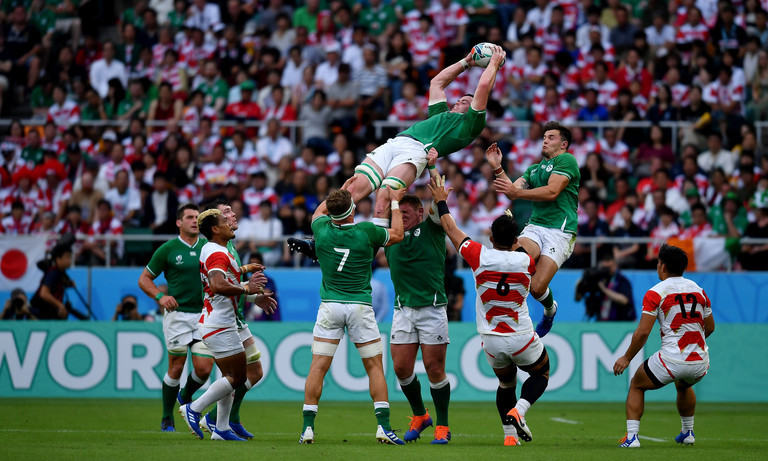 Not even the most explosive player Irish rugby has seen in decades could break this impenetrable unit.Ireland's leading tackler.

Conceded an early penalty right in front of the posts for going off his feet. Made up for it moments later with an excellent jackal to win a penalty. Huge presence competing in the lineout, assuredly one of the best jumpers in world rugby now. Rhys Ruddock came on after 55 minutes with the Munster man flirting with a yellow card.

The Leinster man takes tackles like Tic Tacs but in reality, he is so much more than a workhorse. His last-ditch covering just before the half-hour mark was a demonstration of remarkable in-game intelligence and he was keenly aware that he could not give the referee a chance to penalise him for not releasing.

Epitomized Ireland's overall effort. Did not majorly underperform but certainly wasn't up to standard either. A break off the scrum and delayed offload proved costly when he collided with Chris Farrell.

Started with a big impact and two huge tackles but couldn't break the Japanese chokehold.

Tough to have any impact in these circumstances. Came on, came off and back on again shortly after.

Played like a man who has played little rugby in recent months. The kick at the very end was surprising in one way and, remarkably, realistic.

A spectacularly loose pass with Ireland chasing the game.

Ireland are a power team and when their pack are edged out it pulls the rug from under the team. With the starting team flagging the bench never bolstered it. 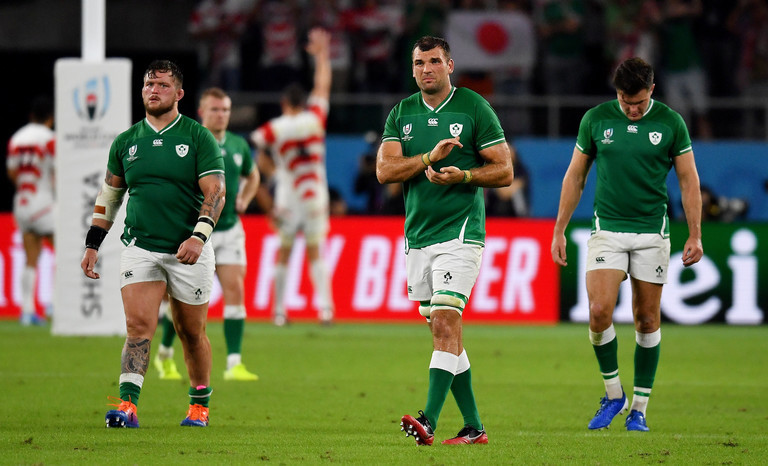 Make no mistake, a brutal post mortem awaits. No one player hugely underperformed but collectively the team did. If 2018 was a year of rejoice 2019 is a year for reflection. Not good enough.