Damning. Ireland are like the man who fell off the cart. They have been left behind, wallowing in the familiar dust of a quarter-final exit as the modern, free-flowing carriage roars ahead.

It was utterly one-sided. Entirely skewed, both in terms of skill and speed. Blow for blow, the All Blacks were superior. This was a New Zealand masterclass but it was one made by Ireland. Instead of resistance, they offered compliance. They missed touch, tackles, passes and the boat. Rugby's revolution is never more apparent than in tournament's such as this and this team side haven't cut it.

Everywhere they turned, Joe Schmidt's side met brick walls and blitzes. An Aaron Smith double kickstarted the bonanza. Beauden Barrett continued it. From there, the floodgates opened and the black sea poured through.

Codie Taylor, Matt Todd, George Bridge, Jordie Barrett. Fish in a barrel. 10,000 kilometres, the distance from Dublin to Tokyo. Tenfold, the difference between New Zealand and Ireland. It finished 46-14. 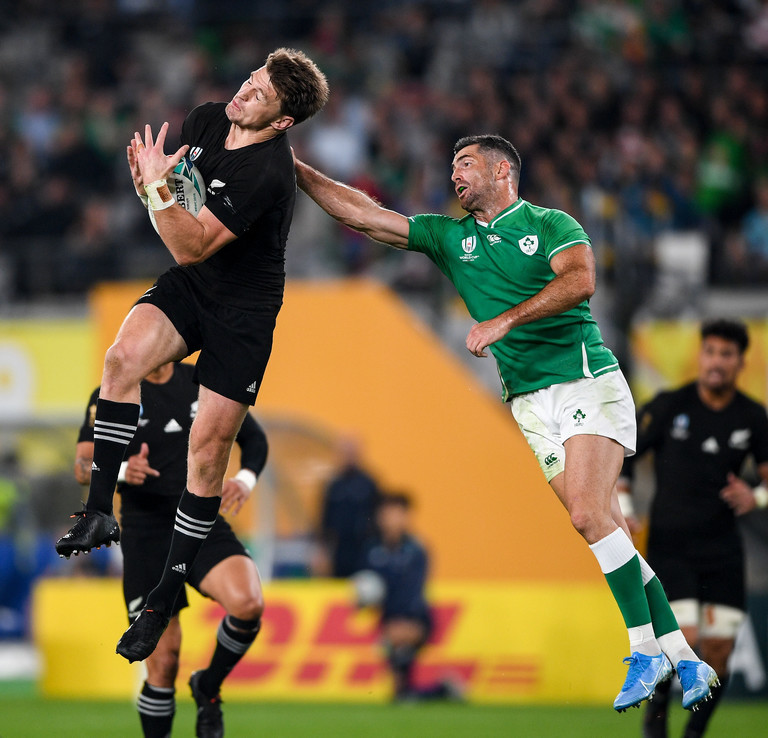 Not his usual self defensively, caught out twice and made a crazy read prior to Smith's second try. Missed as many tackles as he made. Taken off for Jordan Larmour shortly after the break. A new era beckons and this certainly felt like a 'passing the torch' moment, albeit a quenched one.

Ireland tried to target their opponent's inexperienced wingers and instead their own were left at sea. Came into the centre briefly and committed the first of many handling errors.

Had to go off early due to a blood injury. Over and over again forced into near impossible reads to try and stifle New Zealand's sweeping attack. 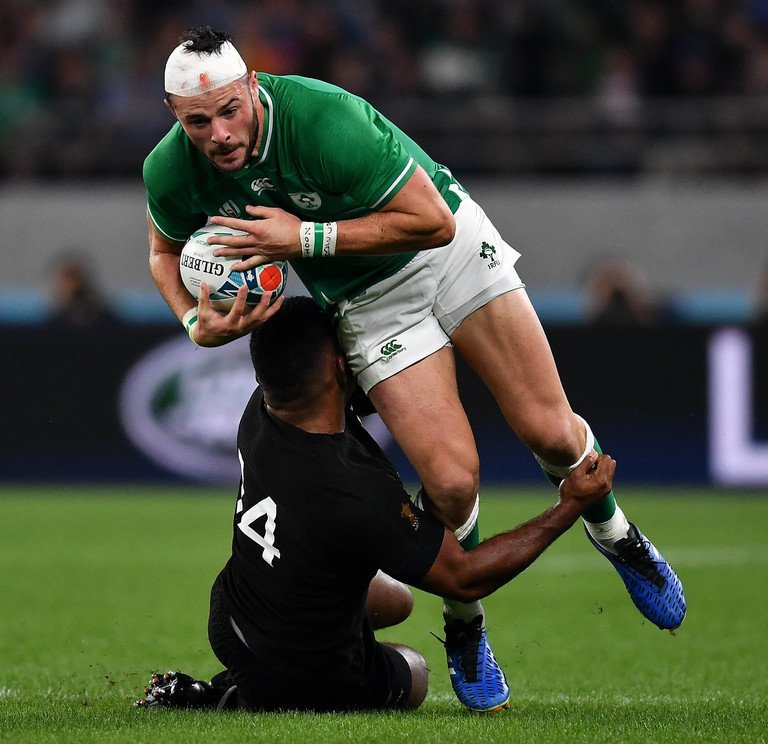 Really sloppy knock-on early on. It is not so much that his handling was wrong but the carry was. Straight-up, one-dimensional, predictable. Ring rust was obvious. Scored a try shortly after butchering a chance before it.

Conceded the game's first kickable penalty to allow Mo'unga get New Zealand off the mark. Made up for it with a brilliant take from the re-start. Here's a remarkable stat, after an hour of rugby Stockdale had got his hands on the ball for a run once. Starved of possession.

Had to contend with Ardie Savea and Kieran Read charging down his channel. Ten down with 18 minutes gone, missing touch and that attacking platform is unforgivable. An error count like today's is a recipe for disaster against this New Zealand side and it showed.

Vexation obvious when he snapped at Nigel Owens midway through the second half. Tough to feed on scraps. The Munster man was working behind a bullied pack and breakdown shitshow.

If anything epitomised Ireland's desperation, it was Healy lunging on and picking up a ball that was quite clearly still in the ruck. He was penalised for it and lucky to avoid a yellow. Like much of the team, his performance has dipped in recent months. 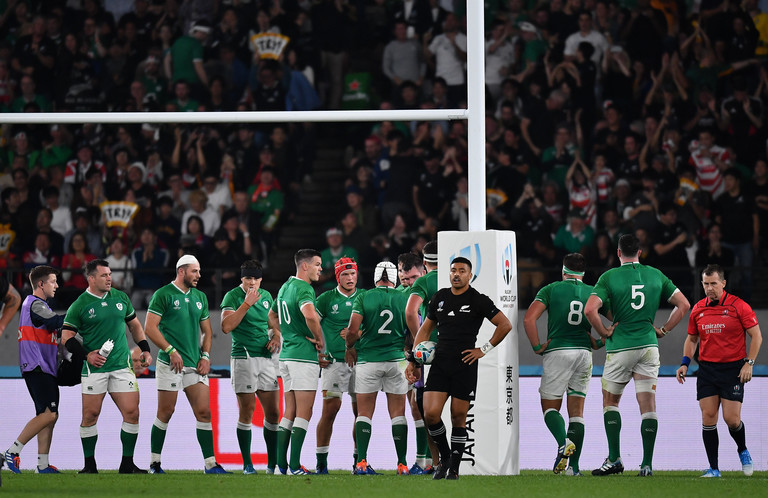 Good offload early on during Ireland's first attack but just not impactful enough at this level anymore. Lineout was 100% but gave their backs poor ball as the majority of throws were to the front. A sad end to a great career.

Scrum was perfect but it mattered little. A telling moment when he was driven backward by a big counter-ruck before the last try of the first half. Men versus boys in the pack.

A really poor tournament. In a team that relies on being dominant, he never was. Irish rugby's historic policy of selection based on status rather than form continues to haunt them.

The only hope for the future is young guns like James Ryan and Jordan Larmour who have shown huge potential. But they can't be expected to lead this team, as much as the Leinster man tried. Great effort in defence, one of few forwards who did not miss a tackle. 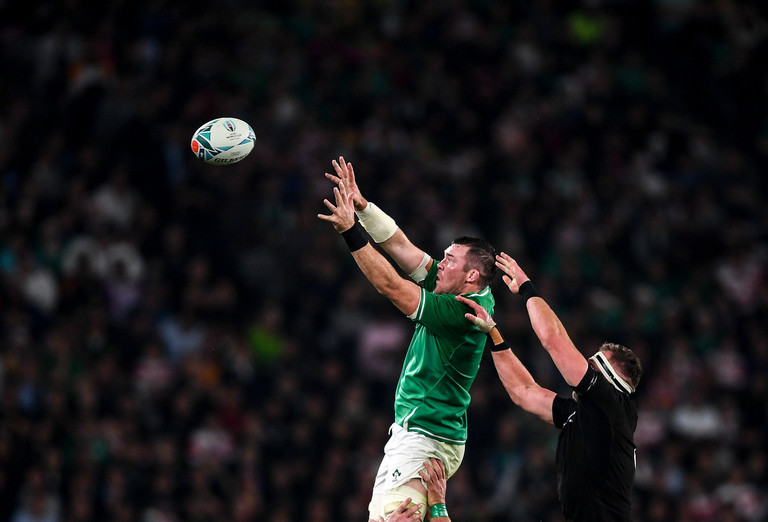 When Ireland needed something, anything, it was O'Mahony who lept up and stole ball at the lineout. Followed it up with a huge poach at the breakdown. It wasn't enough and he ended up compounding it with a penalty before halftime.

The back row battle was huge and Ireland were battered. Both flankers were bested by Cane and Savea.

The only player who can emerge from this game with any credit. Ireland's leading tackler with 16, none missed and the man who picked off the scrum and feed Henshaw for their only try. Soon after forced a penalty try under the posts. Never stopped the fight.

By the time they looked to the bench, Irish heads were gone. Joey Carbery kicked aimlessly, Niall Scannell and Tadhg Beirne missed multiple tackles, Luke McGrath had no impact.

Rhys Ruddock did put up a fight at the breakdown and Jordan Larmour had his moments, one good with a try-saving tackle and one bad when he kicked down Barrett's throat. Andrew Porter came on and got a knock, Dave Kilcoyne kept the pressure on at the scrum.

New Zealand were as good as Ireland were bad. Schmidt's farewell finishes with abject failure. There were more blessings than curses but his legacy has been tarnished by their inability to get past the final eight twice more.

The World Cup woes live on.