As World Cup's go, Ireland were never going to gain much from this game. The minimum was a bonus point victory in Kobe while anything less was bound to be a severe disappointment. As an exercise, they delivered the required result with some considerable caveats. It finished 35-0.

Tries from Rob Kearney, Peter O'Mahony, Rhys Ruddock, Andrew Conway and Garry Ringrose got the job done. It was third gear stuff against a committed and resolute Russian challenge.

Much of Ireland's familiar failings remained throughout. Poor and predictable in attack with a sloppy set-piece. Moving through the motions, rotating the wheels, ponderous rather than polished. Nothing showed significant sign of improvement but not much could. The real downside lies in the injury to Jordi Murphy.

Sparks but no fire. Today was never the day for a backlash but that time is coming. 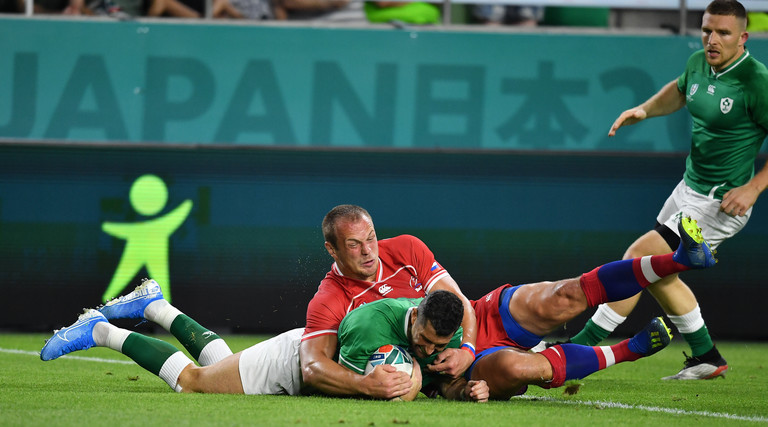 Three tries in three games! One first half mistake when a mix-up in the backfield some a relatively straightforward kick mismanaged and result in a prime attacking position for Russia. An aimless long kick in the second half with Keith Earls screaming for ball outside him indicative of Ireland's lingering directionless in attack.

Looked culpable in that backfield mishap. Squandered a great opportunity to counterattack when he kicked the ball directly out. Finally delivered the crucial bonus point with a good support run after a sensational Keith Earls pass. 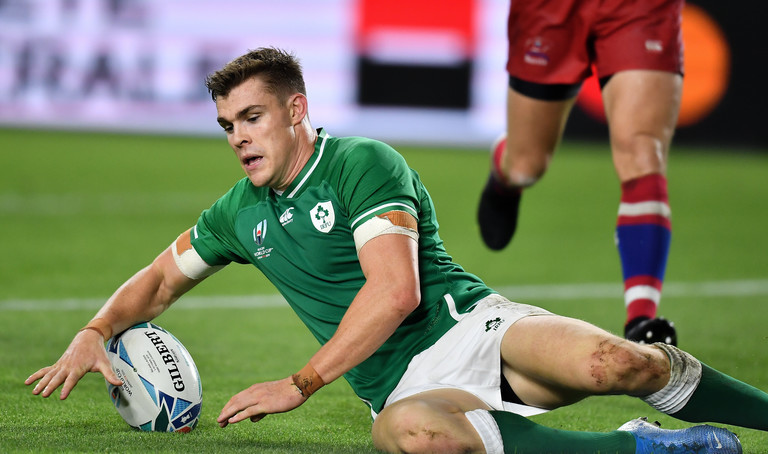 Yet again, the Leinster man went the full 80 for Ireland. The Robbie Henshaw gamble needs to pay off soon or failing to replace him in the squad will have been a severe error. Some smart reads in defence. While he did log a couple of missed tackles, they had a purpose as they drove Russia back infield and cut out wide options.

Conditions are challenging but the number of handling errors will remain a concern for the entire Irish unit. Two offloads.

Superb break midway through the first half and read the situation perfectly. It could have been a try had his support runners timed their line better. Finally came good in the second half with a magnificent take and throw for the fourth try. Four offloads, one of the most important players in this team. 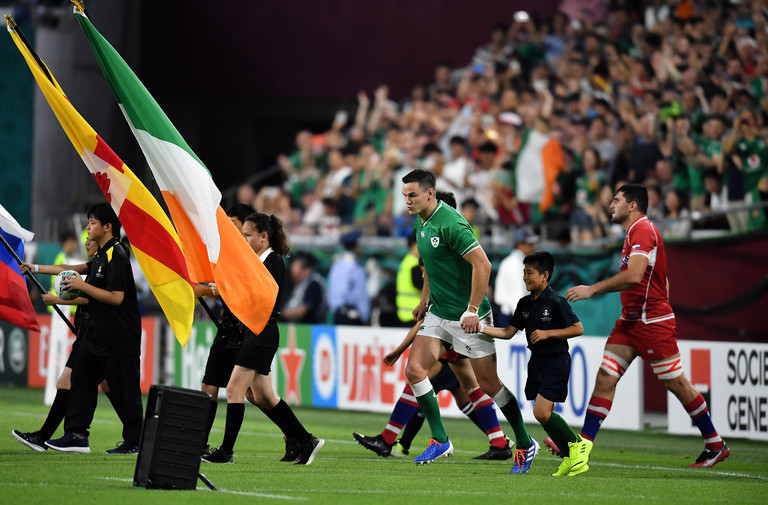 Started brightly and showed plenty of ambition with crossfield kicks and quick penalties. Nailed all three conversions. It is also worth bearing in mind this was the outhalf's first time captaining Ireland. Handled the responsibility well and probed Jerome Garces after a Russian slapdown did not result in a yellow card.

Replaced by Jack Carty at half-time.

Regardless of who slots in at scrum-half, the ruck ball speed remains slow. Three tackles with three missed.

The Bohemians bulldozer. The loosehead has been in outstanding form for the past year and carried it into this tournament. An impressive nine carries for 17 metres. The whole front row was replaced by the hour mark.

The lineout continues to creak. Lost their opening one, lucky to claim the second after a lifting error and throw to the front for the remainder of the half.

The set-piece was not as assured as it needed to be, particularly in the scrum. 'Keep the scrum stable', warned Garces to the Irish front row on more than one occasion. One huge clearout in the build-up to the second try.

Man of the match contender. Tried to inject some creativity and speed into every attack. Steadied the ship after the first lineout misfired. His versatility could now become a huge strength given he has played as a number six often and played as a number 8 for Scarlets.

One handling error early on. Much has been made of the supposed limitations of playing the Munster man at tighthead lock but Kleyn did jump in the lineout. Not as impactful in defence.

The routine robust performance from mister reliable. The most ground made of any starting forward. On top of that, he was Ireland's leading tackler. Man of the Match. Now pushing for a starting spot. 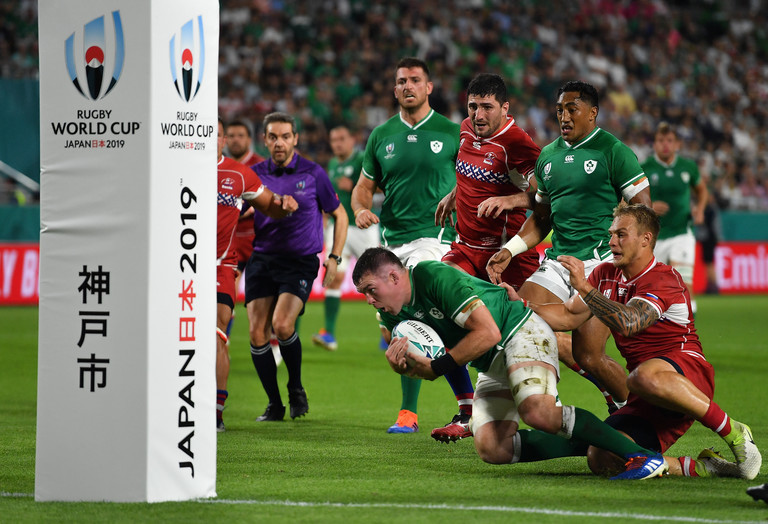 Thundered into the game with plenty of tackles and a huge steal. Great determination to drive forward and take his try. A welcomed outlet along with another expert jumper, Tadhg Beirne, when Ireland needed it. Stole more ball on Russian throws in the second half.

His first involvement after stepping off the plane was to deliver the trademark Joe Schmidt bounceback. Two tackles later, he was done clutching his ribs. It was a cruel blow to a player who seemed ecstatic to finally get his chance. 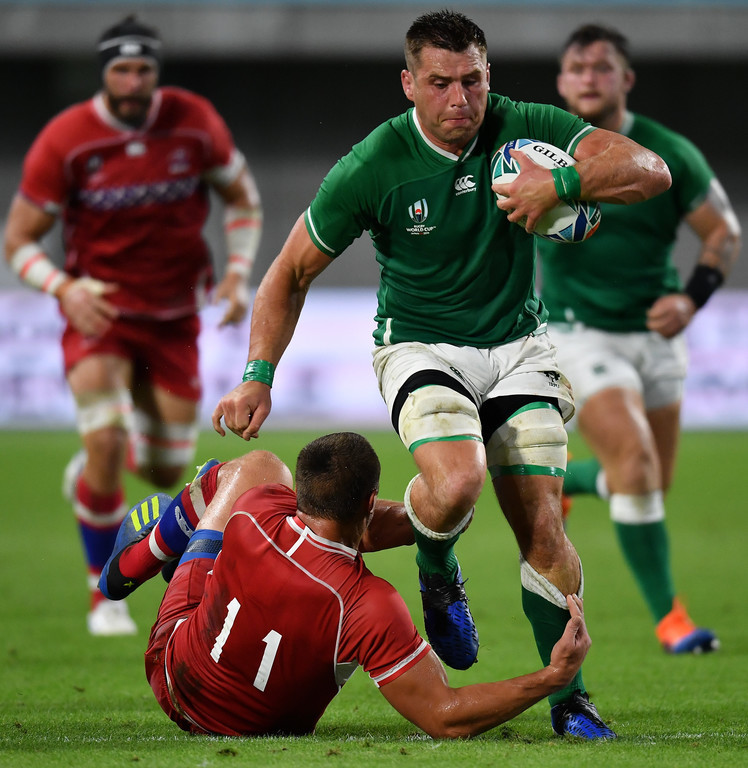 CJ Stander was introduced earlier than expected and got through a mountain of work with one huge carry which should have produced a try in the second half. Jack Carty's first involvement was a sloppy knock-on but made up for it with a chip for Conway's try.

Andrew Porter's breakdown presence was brilliant but worrying that it was needed. Jordan Larmour's knock-ons in the air do need to be taken in context of the conditions. Tadhg Furlong and Sean Cronin were brought on but conceded another scrum penalty with ten minutes left.

Ireland are a step closer to a quarter-final but will carry concerns aplenty into it. The scope for improvement is enormous.

Premier League
18 hours ago
By Gary Connaughton
Watch: Aaron Connolly Scores A Beauty For First Goal Of The Season
45