In a tense and tight game, Ireland beat Scotland 19-12 in their opening game of this year's Six Nations. It was a winning start for Andy Farrell's reign as head coach.

Overall, it was an underwhelming performance from Ireland, one on which many improvements will have to be made.

Looked electric when given a chance to run at Scotland. Was mostly solid under the high ball apart from a messy situation involving Conway and Ringrose in the first half. Made a superb intercept with Scotland in a dangerous position early in the second half.

Along with Ringrose and Larmour, didn't deal well with an Adam Hastings kick midway through first half. Not involved as much as he would have liked. Chased kicks well and won the penalty which led to Ireland's lead stretching to 19-12 late in the game. Didn't get as many touches as he would have liked, only carried four times.

Like most of the Ireland backline, he looked good and inventive with ball in hand. Suffered an injury in the first half and was replaced at half-time by Robbie Henshaw. 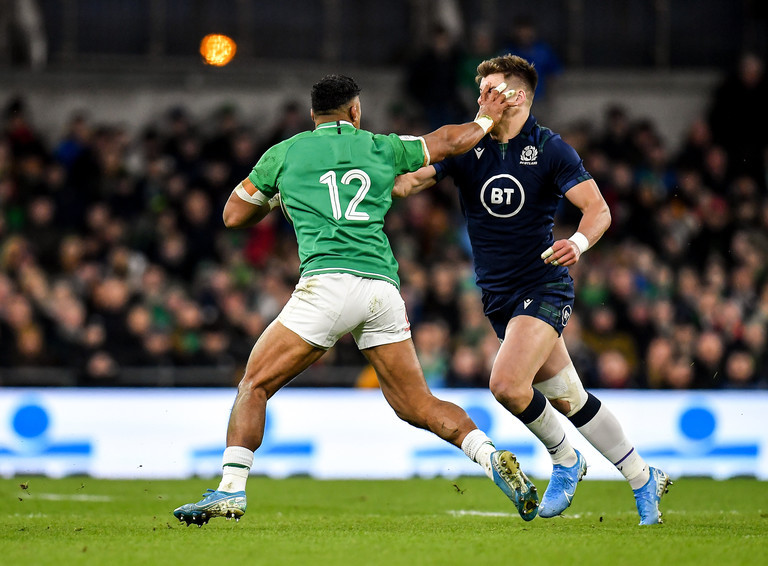 Brought real energy. Made a superb break late in the first half where he exchanged with Ringrose and put Ireland in a great attacking position; unlucky to subsequently see the move break down. Carried 11 times and made 14 tackles.

A break from a Johnny Sexton crossfield kick in the first half was his most eye-catching moment. Like Conway, he didn't see enough of the ball. Carried just four times.

Scored Ireland's first try in an inventive and incensive move with Cian Healy and Conor Murray. Scored all of Ireland's points and was involved a lot but didn't have as significant an impact as he would have liked.

The exchange between him, Cian Healy and Johnny Sexton for Ireland's first try was perfect. Lucky not to give away an intercept try in the first half. Poor pass was caught by Scott Johnson with Ireland in a great attacking position after their best backline move of the game. His boxing kick was poor. A performance which will only make louder the calls for John Cooney to get a chance to start.

Replaced by John Cooney on the hour mark.

Showed quick hands and played a perfect pass to Conor Murray which opened up Scotland for Ireland's first try. Not involved as much as he would have liked. Carried five times and made ten tackles. Part of a scrum which did not dominate as would have been expected.

Replaced by Dave Kilcoyne after 50 minutes but came back on a minute late when the Munster prop suffered an injury in his first play. Subsequently replaced by Andrew Porter after 65 minutes and then came back on to replace Tadhg Furlong with two minutes left.

His lineout throws were nearly perfect. Just one of the eight was messy. Won a great turnover and penalty late in the first half with perfectly time tackle on Adam Hastings. Carried seven times and made eight tackles. 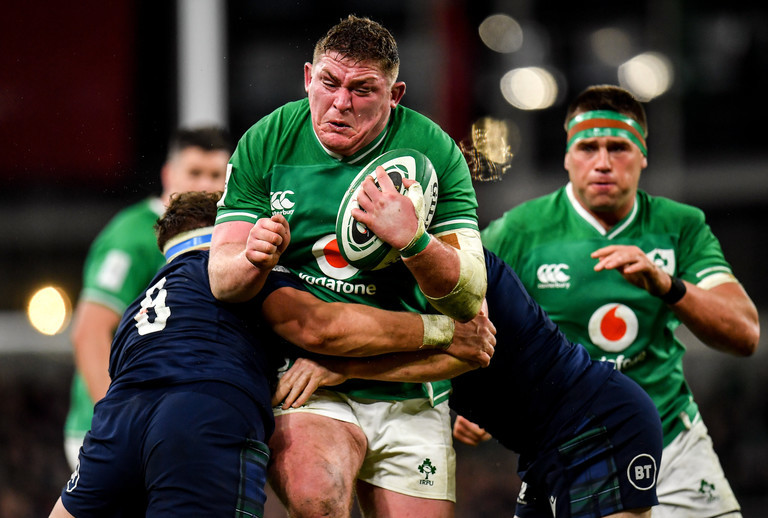 Far more involved in the second half than the first. Carried ten times and made 15 tackles.

Had some big defensive moments, robbing two lineouts and making a hugely important tackle to stop Scotland after Conor Murray's pass was intercepted late in the first half. Made 13 tackles and carried seven times.

Replaced by Devin Toner after 67 minutes.

Ireland's number one lineout option. Immense in defence, making 19 tackles, the most of any Irish player. He also carried 11 times for 55m.

Ireland's best player. Started the game at blindside but moved to number eight when Caelan Doris went off injured. Won huge turnover and penalty late in first half with Scotland in a dangerous position. Made 17 tackles in all, the second most of any Irish player.

Won a massive turnover at the breakdown with just minutes to play as Scotland were camped on the Ireland line.

Made some vital defensive interventions and slowed down Scotland ball continuously at the breakdown. Made 15 tackles.

Caelan Doris - not on pitch long enough to rate

Won turnover and penalty 90 seconds into game but just minutes later his international debut was over when he was replaced following a clash of heads. 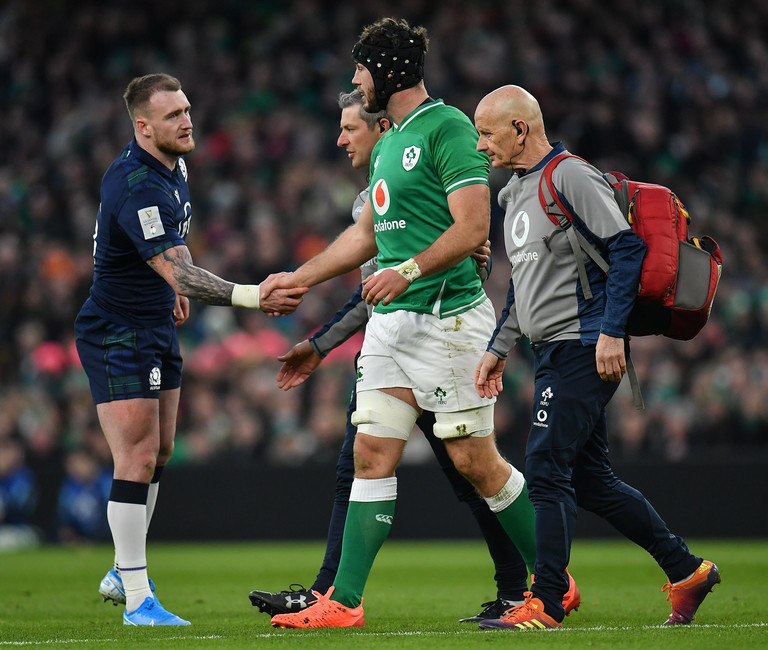 Caelan Doris of Ireland shakes hands with Stuart Hogg of Scotland as he leaves the field with medical staff. Photo by Seb Daly/Sportsfile

Ronan Kelleher - not on pitch long enough to rate

Replaced Rob Herring in the 73rd minute for his Ireland debut.

Dave Kilcoyne - not on pitch long enough to rate

Came on for Cian Healy after 50 minutes but went off a minute later after suffering a knock during his involvement.

Andrew Porter - not on pitch long enough to rate

Came to replace Cian Healy after 65 minutes. Played at loosehead rather than his usual tighthead station.

Devin Toner - not on pitch long enough to rate

Came on for Iain Henderson after 67 minutes.

Entered game in the fifth minute as a replacement for the injured Caelan Doris. Looked like a man who had a point to prove after not being given a starting spot.

As usual, he was a nuisance for Scotland at lineouts. Won a great turnover at the breakdown midway through the first half.

Kicked really well, far better than Murray, during his time on the pitch.

Ross Byrne - not on pitch long enough to rate

Replaced Johnny Sexton in the 73rd for his Six Nations debut.

Came on at half-time for Garry Ringrose. Brought energy.