The Irish Rugby Depth Chart After The November Internationals

It's fair to say Ireland have had a very successful Autumn Series. They won and dominated in all their matches, including the match against the mighty All Blacks. Many came into this series thinking Andy Farrell would play the slow, passive rugby that was prominent during the last Six Nations. But instead Ireland played some very expansive, passing rugby and scored a heap of tries: 19, in fact, over the three matches, while starving their opposition of the ball.

It was some really entertaining and enjoyable rugby to watch with the results to match. Farrell seemed to have settled on a first choice XV ahead of the Six Nations. He didn't make many changes over the three games, meaning many talented players like Zebo and Larmour didn't even see the Ireland squad.

There is still huge depth in the squad however and it has changed a bit after these internationals. Therefore we at Balls have updated our depth chart so here is the newly improved depth chart. 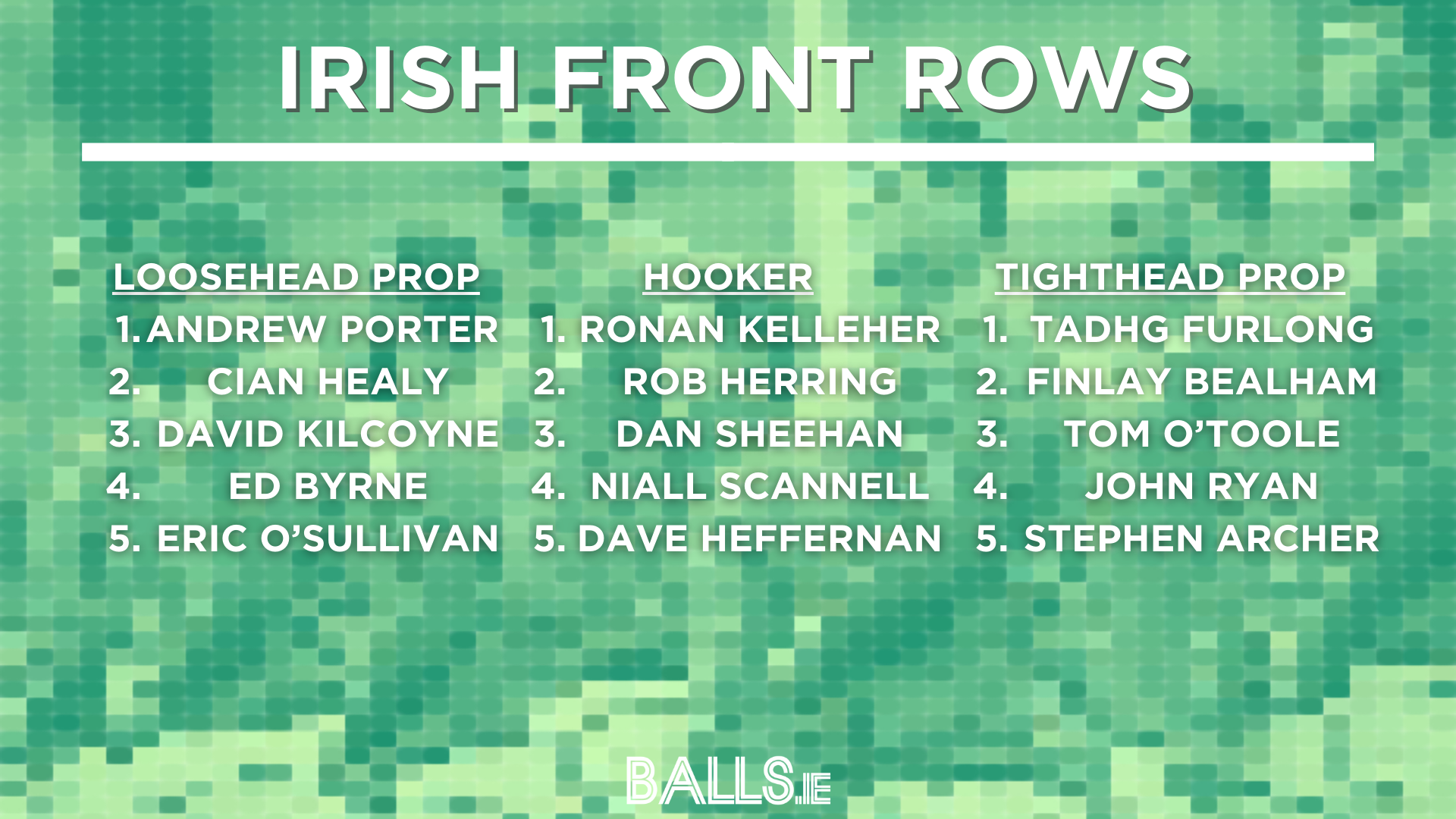 The Leinster front row of Porter, Kelleher and Furlong started all three test matches and deservedly so. They helped Ireland dominate each forward pack they came up against. Porter especially has brought his game to a whole new level since moving to loosehead. Kelleher and Furlong too were also pivotal in the series.

The likes of Healy, Herring and Bealham got some minutes in and Dan Sheehan got his first taste of international rugby, scoring a try against Argentina and coming on as a sub against Japan. Some pundits are saying Ireland have the strongest front row in rugby right now and it will be fascinating to see if the form can continue into the Six Nations in February. 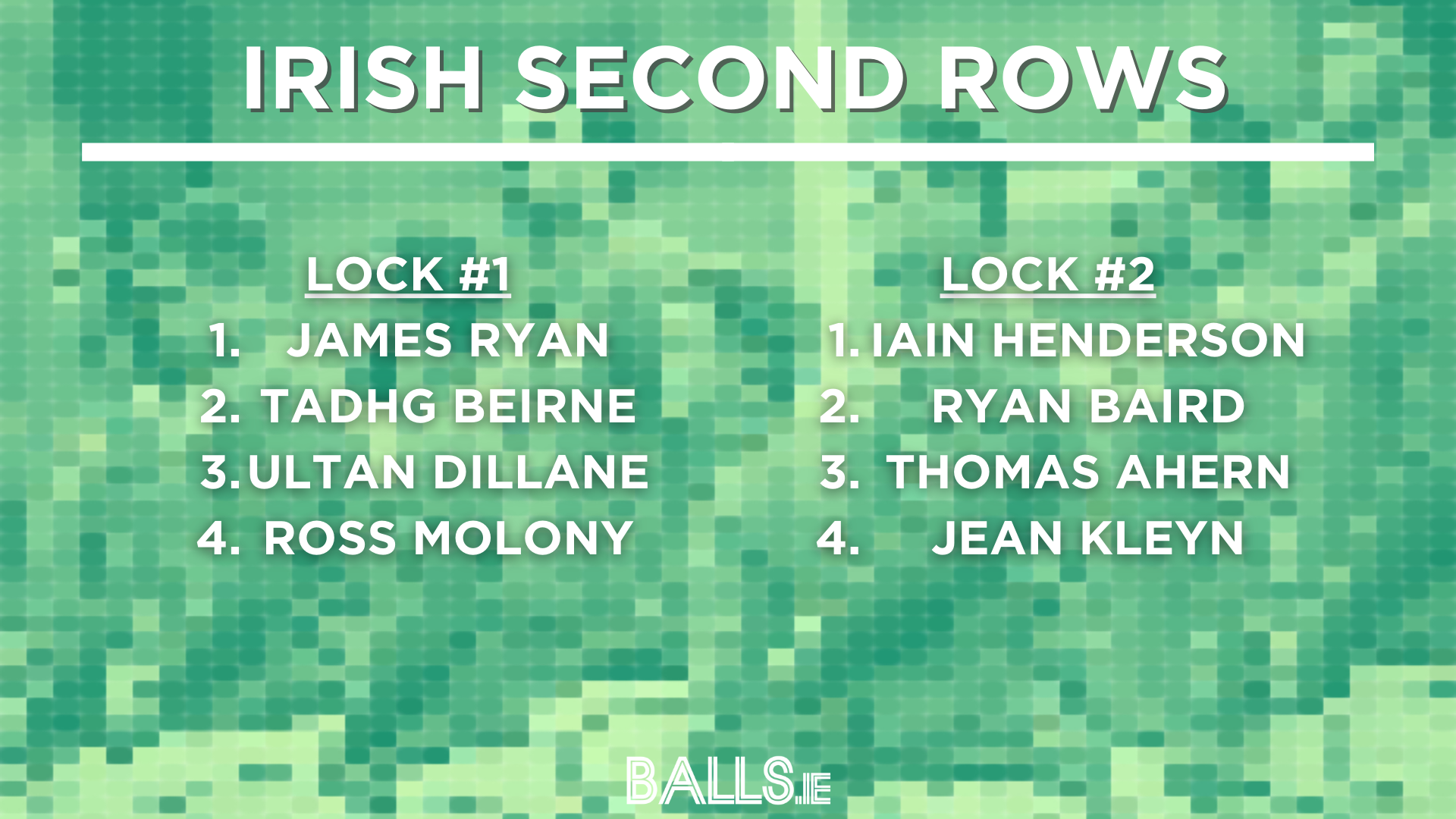 James Ryan and Iain Henderson solidified their partnership in the second row with outstanding displays this month. Ireland had a very good lineout and it's definitely not as big of an issue as it was this time last year. Paul O'Connell has come in as coach and fixed up the lineout to the level it used to be during the Schmidt era.

Tadhg Beirne and Ryan Baird too and decent cameos across the three matches. Beirne's athleticism and ability to get over the ball really helped Ireland over the line in the final stages of the All Blacks match, winning the last penalty to end the match. 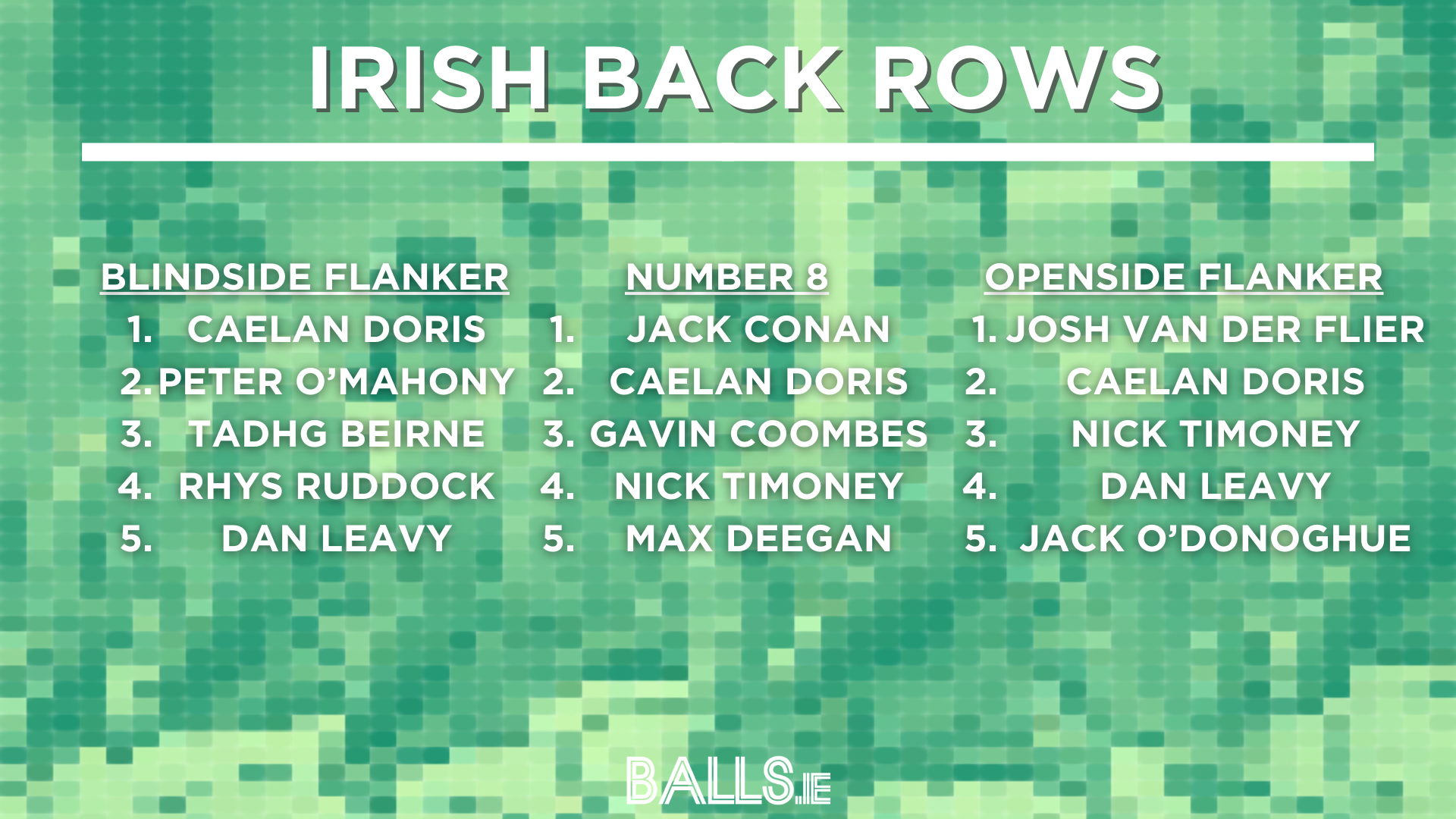 The first real surprise in this depth chart has been the rise of Doris. The Leinster man had spent most of his minutes at number 8 and he still fancies himself as a better 8 but his performances at blindside flanker were phenomenal. He was man of the match against New Zealand and rightfully so, scoring a brilliant try and brining so much power to the Irish pack.

Jack Conan too got the man of the match award against Japan as his speed and handling skills have been a huge asset for Andy Farrell this month. Finally Josh van der Flier has shone again and is really stamping his mark of being one of the best 7s in the world. The rotation of O'Mahony, Timoney and Beirne was also of great benefit for Farrell and they should all play a role once the Six Nations come around. 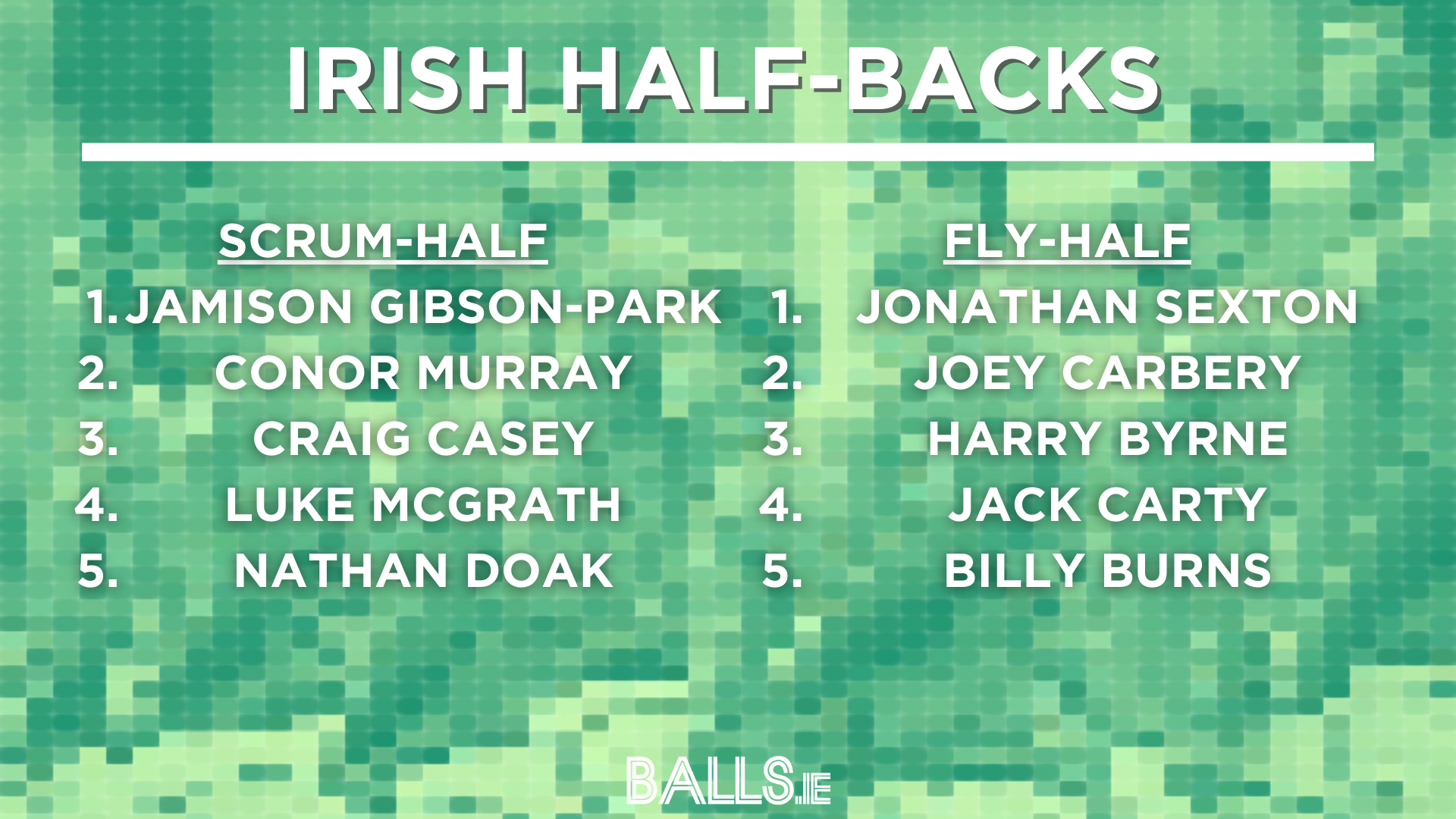 The half-backs were a worry coming into this series but coming out of it there's not much to be worried about anymore. Jamison Gibson-Park really upped his game to another level and cemented himself in that starting 9 jersey. His speed at the rucks gives Ireland many more opportunities to break down an opposition. His kicking was fine as well, especially in the New Zealand game. Having Murray come off the bench to close out a match could be the move going forward as the Munster man is great at dictating a tempo of a game along with being the best box-kicker around. Lastly, Craig Casey had a good run out against Argentina and is a very exciting prospect for the future.

At fly-half, the biggest worry was who is good enough to come in for Sexton? Well in Joey Carbery and Harry Byrne Ireland have two very capable international fly-halves. Carbery deservedly got man of the match against Argentina and hit three amazing and crucial penalties against New Zealand to help Ireland win. Byrne had a solid half hour against Argentina and undoubtedly has some huge experience now from just being in camp. 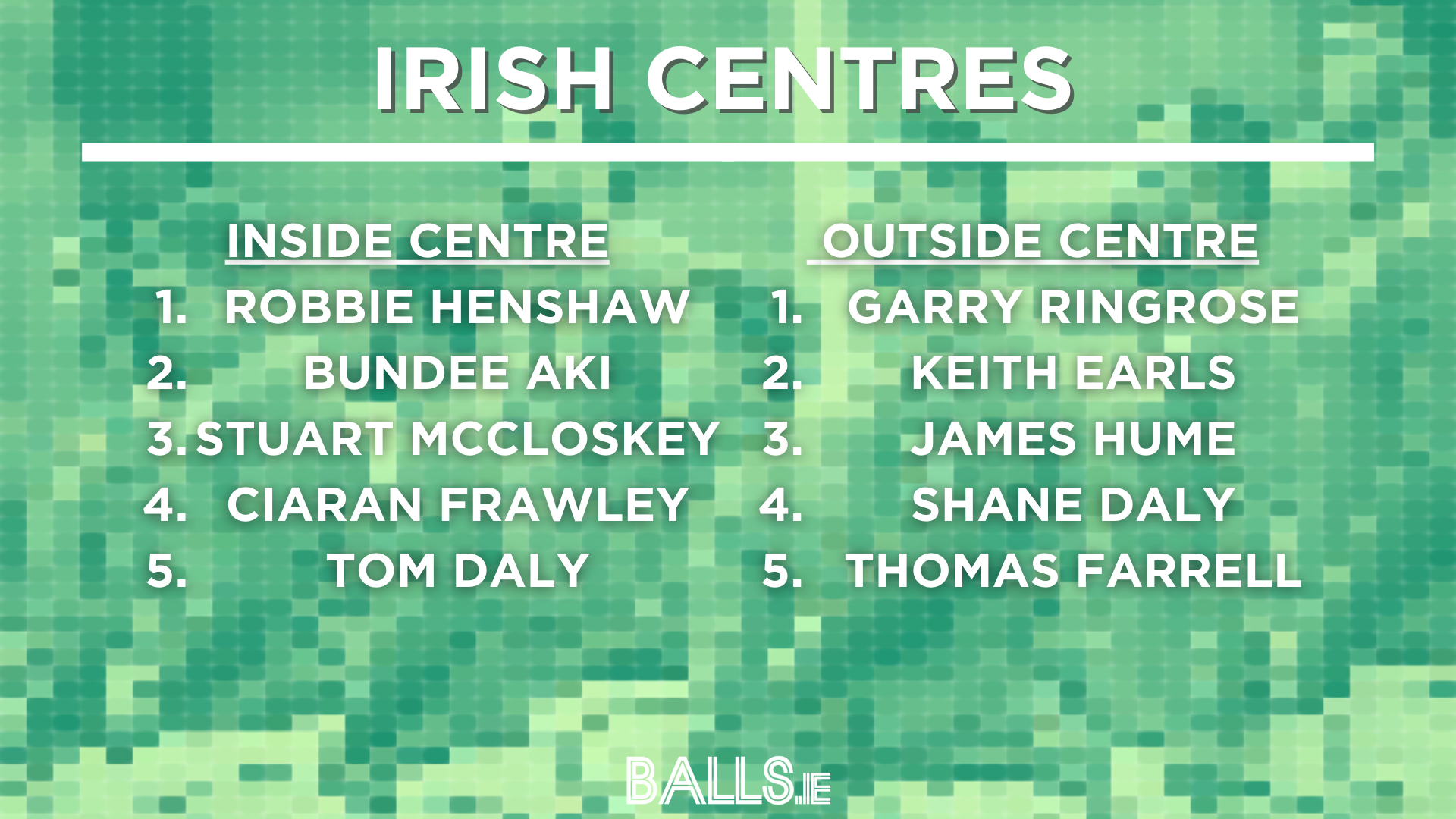 Inside centre is probably going to be the biggest question mark heading into the Six Nations. Robbie Henshaw was out for the first two games but had a good outing against Argentina and has many people calling him the best 12 in the world. But Bundee Aki was sensational against Japan and New Zealand and it will be incredibly harsh to drop him. It is great to have two such great centres so it's a good problem for Farrell to have.

Garry Ringrose shone as well during the Autumn Series. His ability to read the game is akin to Brian O'Driscoll and his tackling is impeccable. He may not be as flashy as Drico but the Leinster man is certainly a top class outside centre. 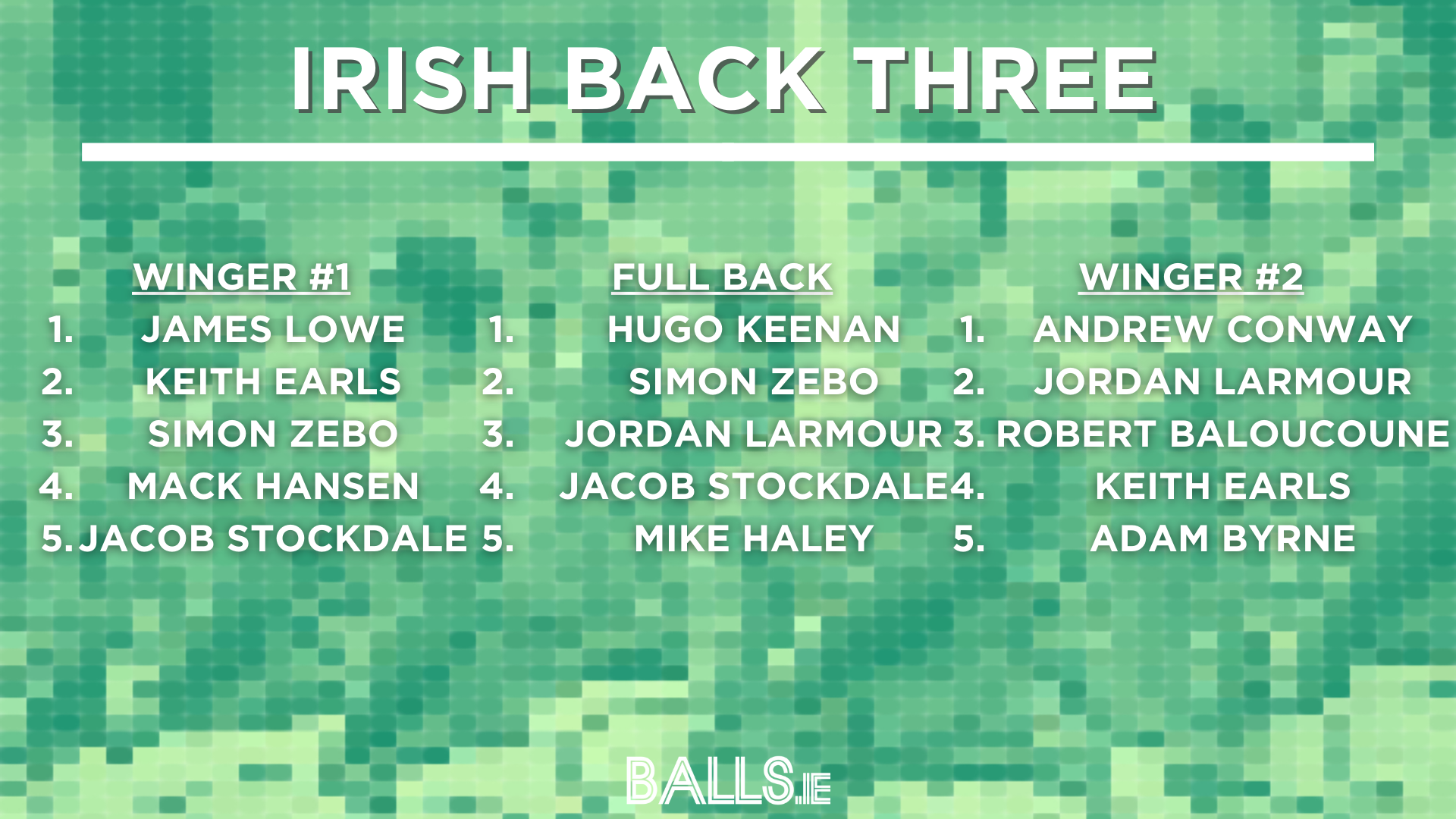 The wings gave fans the biggest surprise this Autumn. Heading into the test matches many people had penciled in Jordan Larmour and Keith Earls as most likely to start with maybe Zebo or Lowe as an option off the bench. But Farrell went took a risk against Japan and picked Lowe and Conway and it payed off. The pair scored four of the nine tries including a Conway hat-trick and they kept their spots for the All Blacks.

The pair really stepped up when it mattered, with Lowe having his best defensive performance in an Ireland jersey and Andrew Conway being a menace in the air. Robert Baloucoune got another cap against Argentina and his pace is a real threat to any opposition. The young Ulsterman will surely play a big role in years to come. Although he didn't see any minutes on the pitch, Jordan Larmour is still a big player for Ireland. He has improved his aerial ability lately and his footwork is second to none. While having someone like Baloucoune coming through is exciting, Larmour is tried and tested at the top level with both Leinster and Ireland and excelled so will be a great option for Farrell to have.

Hugo Kennan also secured the full back spot with some really good displays. Fans were hoping to see the return of Simon Zebo but Keenan was too good to be dropped. He is an unsung hero in the squad and goes criminally under the radar.

It's shaping up to be another exciting Six Nations for Ireland if they can replicate this form. 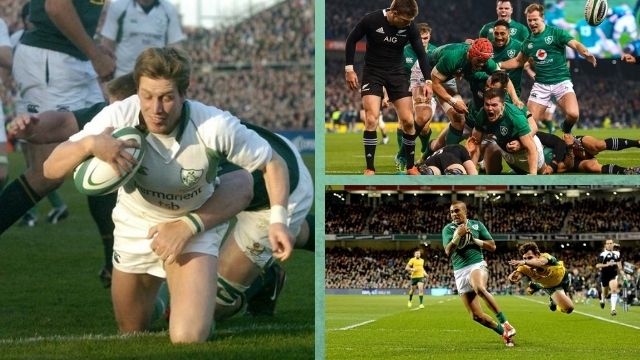