The Ireland Team We Want To See Start Against France

Ireland's Six Nations championship has yet to ignite but the visit of a mercurial French outfit provides a platform for a return to form. Sunday's showdown is a big game for several key players.

Not since 2011 have France won a Six Nations game in Dublin but there were embers of a potential fire in two of their last three performances. On this week's Balls.ie rugby podcast, World in Union, we selected the Irish team we would like to see take to Landsdowne this Sunday.

The Ireland squad regrouped on Monday night ahead of the fixture and a squad for this weekend's game will be named on Wednesday morning. 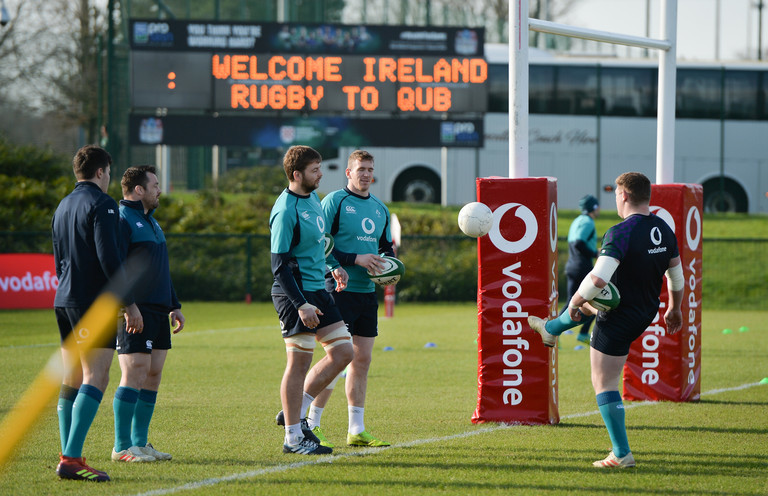 Given the lack of creativity in their offensive gameplan, the return of Gary Ringrose is to be welcomed. A player who can stand in as first receiver, kick and bring much-needed line speed in defensive. His likely partner is currently unknown, but if Robbie Henshaw can shake off a dead leg he is struggling to overcome his inclusion would also add to that.

Elsewhere, it was in the reverse fixture that Johnny Sexton delivered an iconic game-winning drop goal and it would take just one similar moment to cast aside the recent uneasiness. Conor Murray is another player looking to play his way back into form and has gradually improved as the tournament progresses.

In the pack, Ireland's carries to metres gained ratio is abysmal and CJ Stander would certainly correct that. The other two potential changes are moves to address the breakdown.

Ireland are a possession-orientated team who want the ball on their own terms and opposition teams are all too aware of that fact. In the last three games, ball has been spoiled or slowed deliberately much to Conor Murray's frustration. If fit, Dan Leavy would unquestionably bring monumental aggression to this facet of the game. Josh van der Flier is also an option after immediately correcting line-speed when he came on against Italy.

In the second-row, Tadhg Beirne is the best poacher in Europe and this weekend Ireland face a team who are woefully inconsistent in their numbers committed to clear-outs. However, it means a third different line-out caller in four games and Joe Schmidt may well opt for Quinn Roux or Iain Henderson instead.

On the bench, Sean Cronin is a likely fall guy for the line-out malfunction against Italy while Dave Kilcoyne's performance should see him edge Jack McGrath. John Cooney has stiff competition after Kieran Marmion's sensational Connacht cameo while Jack Carty should continue if Joey Carbery remains unavailable.

Rugby
2 years ago
By Maurice Brosnan
Munster Outclassed As Irish Rivals Make Their Mark With Masterclass Leinster Lesson
Rugby
5 years ago
By Sam Moore
Joe Schmidt's 'Rabbits' Will See Us Past France According To Gordon D'Arcy
Popular on Balls
Football
14 hours ago
By Jonathan Byrne
Duffy's Redemption Complete As Potter Won't Replace £50 Million White
GAA
19 hours ago
By PJ Browne
20 Years After Last Wexford Hurling Final, Rapps' Mossy Mahon Gets The Win
Golf
20 hours ago
By Balls Team
10 Years On, Remembering Graeme McDowell And The Greatest Video Ever Made
GAA
17 hours ago
By Jonathan Byrne
Laois County Board Investigating Wild Brawl At Senior Football Match