Edit: A previous version of this article indicated that Conor McKeon had not yet played in the Pro 12 - which is incorrect.

The Under-20s is a vital tool for developing young players. Exposing the best of the next generation with similar players from other countries has seen the likes of Handre Pollard, Henry Slade, and Hallam Amos leapfrog into the senior ranks.

Ireland aren't as good with integrating their talent from U-20s level to provincial and international standard. Of the 94 players used for the Ireland U-20s from 2013 to 2015 - only 69 players are still involved in the provincial set-up, with a further five players who are playing their rugby in the Top 14, the Premiership, and the Championship. 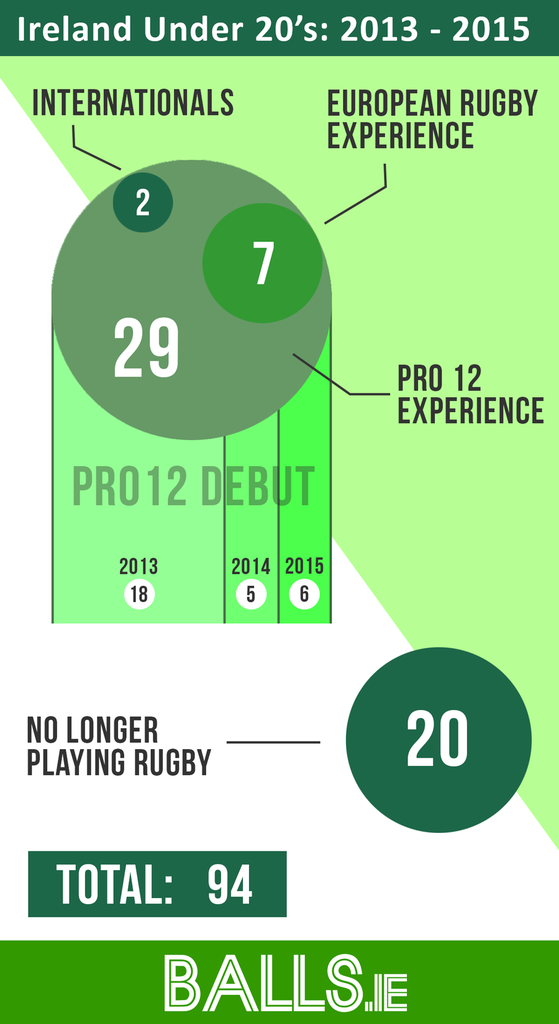 Just two players have taken the leap in these years to be capped by Ireland - Robbie Henshaw and Stuart Olding. Compare that with four from England in the same period - Jack Nowell, Anthony Watson, Henry Slade, and Luke Cowan-Dickie.

Delving further into it - just five other players have European rugby experience. Fortunately 22 have minutes in the Pro 12. Only two players who have left their academies - Leinster lock Gavin Thornbury, and Ulster back row Frankie Taggart - haven't had Pro 12 experience. Taggart has played for Emerging Ireland.

Of the remaining players still involved in the provinces - 29 have only played B&I cup, while another 11 have still to play any games.

Of the 25 players who aren't with any provinces right now, five are playing elsewhere. Eight have been released from their contracts, five players from pre 2015 weren't signed, and six are from last year's group should still be available, or could be with sub-academies. 2013 has the biggest attrition rate - with nine players not playing the game anymore.

Those figures don't really reflect what 2015 player is on the rise, or what 2013 graduate is facing the end of their career. It's very understandable for academy players in their first year to have not played any Pro 12 rugby or British & Irish Cup yet. The B&I Cup hasn't started for this season yet either. So if any players that have played at this level already are on a good path for the rest of their careers.

Conversely, players in their third and final year of the academy, or recent academy graduates should need to have some exposure to Pro 12 rugby already if they want to follow the path all the way to international level. There are obviously some exceptions to this, but by and large you need to play some Pro 12 rugby by the end of your final year in the academy.

Crosbie and Byrne face a tough challenge with a lot of young competition ahead of them - Noel Reid has moved up a level this season blocking Crosbie's path - while Adam Byrne is stuck with Leinster A while the likes of Garry Ringrose and Cian Kelleher have leapfrogged him.

At a glance, only five players who graduated in 2014 have Pro 12 experience, while six players from the following year (including two eligible for the U-20's in 2016) have been exposed to senior level provincial rugby. That bodes well for those six players, four of which were part of that 2014 team.

In conclusion, Ireland don't give our best young players early opportunities to prove themselves - but it looks like this is changing. It helps that the 2015 class of U-20's looks to have some star potential including Garry Ringrose, Stephen Fitzgerald, and Ross Byrne who have already made the step up.

Indeed, that 2015 class looks pretty special considering there has only been two months of time available for those players to be given Pro 12 experience, and so many already have.

Here's the breakdown of the players:

Luke McGrath (2013) - behind Reddan and Boss at Leinster, McGrath is showing signs that he has a long future.
Darragh Leader (2013) - broke through last season, but has since fallen down the pecking order. Squad player for Connacht with a future.
Ed Byrne (2013)- Injuries to props last season gave Byrne a chance. He has some potential, but there are better looseheads coming up behind him.
Bryan Byrne (2013) - You would have expected the young hooker to have had more exposure at this stage, but he's stuck behind Richardt Strauss and Sean Cronin. If he is able to get more gametime ahead of Aaron Dundon and James Tracey - Byrne could start to deliver on his promise.
John Andrew (2013)- Andrew was an unused sub in the Champions Cup once, and has a few caps. He's firmly behind Best and Herring.