Ireland U20s: Everything You Need To Know About The World Cup Squad

Ireland's U20 World Cup campaign kicks off on Tuesday at 3.30pm on TG4. This year's bunch are a talented group despite their poor final results in the Six Nations. Argentina represent the first challenge for Nigel Carolan's side, while Scotland and New Zealand await later on in the group.

Just like before the Six Nations, here is a breakdown of the squad, and what to expect from this year's crop of Ireland U20s. 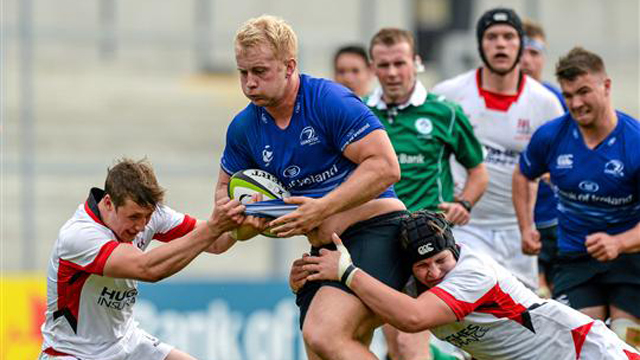 Jeremy Loughman is one of many from last year's Blackrock SCT. The powerful prop was one of Ireland's standout performers during the Six Nations. Capable of playing on both sides of the scrum and has experience with the Leinster A team this year. He's a likely candidate for a full academy place for next season and could well end up as a tighthead in the future.

One player who was called up mid Six Nations is U19 Leinster prop Andrew Porter. A beastly individual from St. Andrews is the latest in a long line of ridiculously good loosehead props in Leinster, and will get vital experience this year for next year's team.

Ulster's Michael Lagan is unlikely to be missing out after being the primary back-up to Loughman in the early Six Nations.

Ulster hooker Zac McCall was one of my favourite players of the Six Nations. The all action ball handling hooker features prominently in the loose and will be Ireland's first choice over Sean McNulty.

Sean McNulty is one of only four Munster representatives in the squad. Tall for a hooker at over 6', McNulty is a big unit and has experience playing during last year's Six Nations. Both hookers are mobile enough to be included in Ireland's U19 7's squad last summer.

It's the same two hookers from the Six Nations squad. 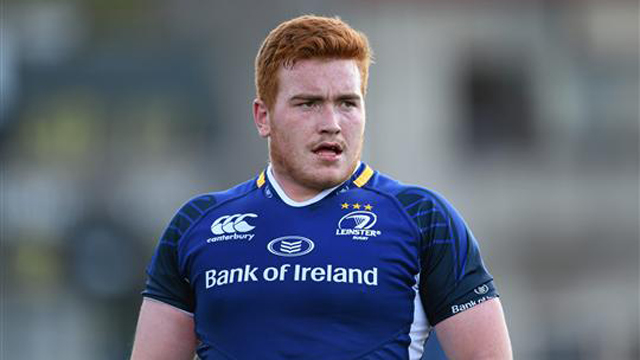 Oisin Heffernan is another with U20 international experience already in the squad. The Roscrea prop is the cornerstone of the scrum, and will be looking to fulfill his undoubted potential. There are a lot of big scrummagers in the tournament, so Ireland will need Heffernan to be at his best.

Conan O'Donnell is the second tighthead in the squad. The U19 Connacht prop is an outstanding operator in the tight, and rarely gives away any penalties. The Summerhill prop quietly goes about his business in an impressive manner. O'Donnell had a mixed bag in the Six Nations, impressing against bigger and older props, while getting caught out a few times. He keeps improving and will be fantastic for Ireland next year. 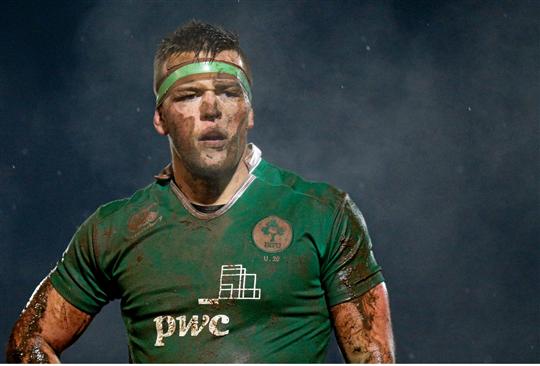 When Ireland played Australia in an U19 friendly in December 2013, David O'Connor and Alex Thompson were the chosen second row pairing, and they were Ireland's favoured partnership during the Six Nations too.

O'Connor and Jack Dwan were the lock pairing for Blackrock in their SCT win last year which gives them a chance of renewing their partnership for Ireland, but Connacht's Romaine featured from the bench.

Connacht's Cian Romaine has an outstanding workrate. His motor and the number of tackles he gets through in a game is outstanding, and it sometimes seems like he's in multiple places at once such is his effort.

Josh Murphy filled in at lock against Wales, but he isn't stocky enough to help Heffernan in the scrum, so Ireland will be relying on Thompson and O'Connor. 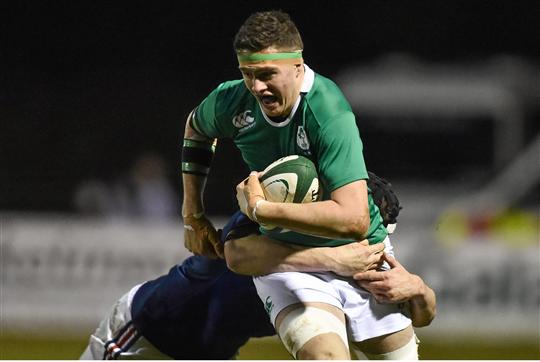 Josh Murphy and Stephen McVeigh are two very different options for Ireland at blindside. McVeigh's best attribute his ball carrying, while Murphy's defensive work is a huge asset to any team. Murphy can play in the second row aswell. Murphy is first choice, and was part of an outstanding backrow partnership with Rory Moloney and Lorcan Dow for Ireland's better performances.

McVeigh is a former Clongowes No.8 who moved to the Connacht academy, while Josh Murphy has starred for UCD in the UBL since graduating from St. Michael's and was in the JWC squad last year. 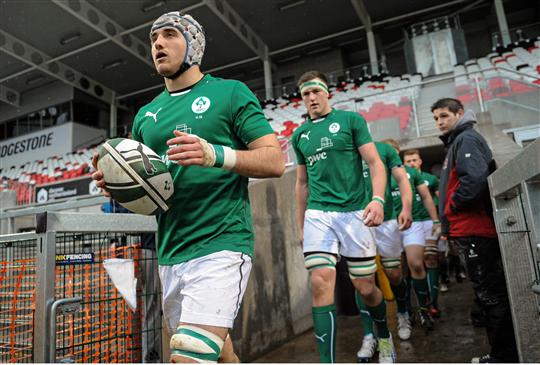 There's an argument to say that Rory Moloney was Ireland's best player in the Six Nations. When he played, Ireland usually played well, and his absence was telling against Wales when Ollie Griffiths had a field day at the breakdown.

Connacht's Rory Moloney is another highly rated prospect in their academy. Moloney was one of two backrow stars for Roscrea in their impressive SCT run two years ago along with last year's star Sean O'Brien. Moloney captained Ireland U19 against Australia in that friendly in December 2013 when Nick McCarthy was unavailable.

Conor Oliver is another from that famed Blackrock class and is one of the most natural openside flankers Ireland have produced in a long time. He has been outstanding for St. Mary's in the AIL, but doesn't have Moloney's impact at this level. 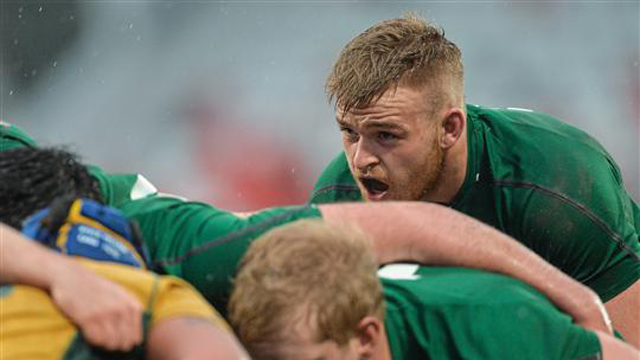 Lorcan Dow is the leader of this pack, and it would not be surprising to see him involved in Ulster matchday squad from next season on. A powerful no.8, who does the simple things well and always takes the right option. The Ulster academy representative  was the sole Ulster forward in the JWC squad last year after injuries to both Dan Leavy and Sean O'Brien and he made the most of his opportunity with some very good displays. Dow is a large unit, and will be hard to stop when he carries the ball.

Backing him up will be another highly rated former Rock player Nick Timoney. Timoney has been one to watch for a while now and when he's on form he's nearly unstoppable from the back of the scrum. Can play anywhere across the backrow comfortably and will be fancied to get a coveted Leinster academy place next year. The talent is certainly there, even though there are whispers about a tendency to disappear from games. Timoney also featured in Rugby World's "School's Team Of The Year". 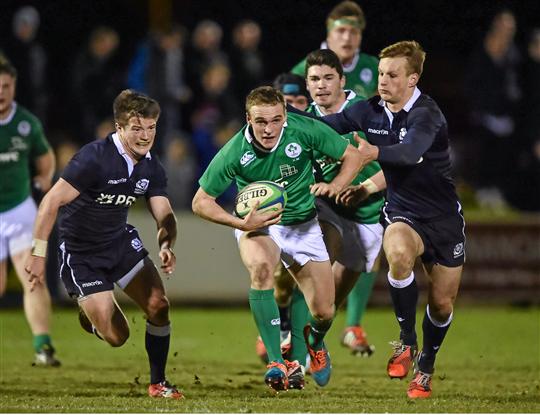 Captain McCarthy is joined by Leinster team mate Charlie Rock. McCarthy is already in the Leinster academy, while concerns over Rock's size have prevented him from being selected at this level before.

Don't take that the wrong way though, Rock is a quality player and is arguably more talented than the St. Michael's captain.

McCarthy will be without his friend Ross Byrne after the latter pulled out with a back injury. With Isaac Boss and Eoin Reddan likely to be unavailable at the start of next season, McCarthy has a chance here to impress and get some Leinster gametime.

Jack Cullen is unlucky to be excluded from the World Cup squad for a second time after being the back up to McCarthy twice in the last two Six Nations.

Not having Ross Byrne is a huge blow. The second coming of Johnny Sexton has pulled out due to a back injury, therefore the competition will be between Leinster outhalf Joey Carberry and Munster's Tomas Quinlan.

Carberry has played both outhalf and scrumhalf and possesses a decent pass. He'll likely be the starter. Fergal Cleary is another option at 10, but is more suited to playing in the second five-eighth role. 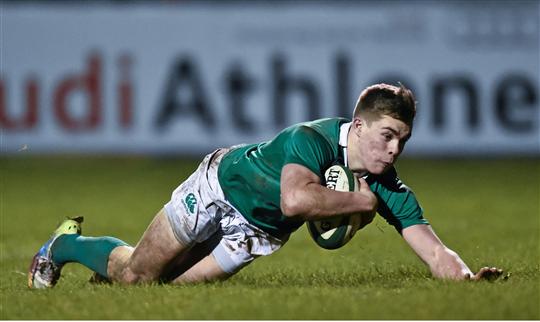 Despite being nominated for the IRB JWC player of the year last year, Gary Ringrose took his game to an even higher level in the Six Nations. Ringrose displayed a lot of attacking threat, and put in a few defensive hits that were reminiscent of another Leinster outside centre. With Byrne out, Ringrose could take up the placekicking duties. During Blackrock's run to the Senior Cup in 2013, Ringrose missed just once in the entire tournament in a flawless display.

Both Fergal Cleary and Sam Arnold played inside him during the Six Nations. Arnold has already played for Ulster since. He's big and powerful and gets his hands free for offloads extremely well. Byrne's withdrawal could mean that Carolan would prefer more control in the form of Cleary, but both will be great options throughout the condensed tournament.

Like Timoney, Arnold was also featured in Rugby World's "School's Team Of The Year".

Ulster's Jacob Stockdale could also feature as a centre, but is likely to find himself on the wing.

Ireland are blessed to have five outstanding talents capable of playing international rugby for Ireland in the future in this U20 class. Leinster's Billy Dardis has long been heralded as the next big thing, so much so that Tony Ward was calling for him to be included in the full Ireland set up 14 months ago.

Injuries robbed Dardis of a good 2014, but the calibre of players at the other provinces is outstanding. An example of Dardis's pace is shown in the video below:

Ciaran Gaffney is one of the best Connacht prospects in years that was moved to the wing to huge success in last year's JWC. Gaffney is versatile having played at 10 in his youth, pacey, extremely intelligent and glides across the pitch poetically. In a similar vein, Stephen Fitzgerald was the name on everyone's lips from the Munster Senior Cup last year, and featured for the full Munster team in their pre season friendlies as an 18-year-old. He is the next extremely talented Munster back after JJ Hanrahan and Simon Zebo. Fitzgerald grew up as a fullback, but was so effective at wing, he should stick to that position for his pro career.

Not to be outdone, the versatile Jacob Stockdale and Jack Owens are both outstanding players. Both can play across the back three and at outside centre to devastating effect. Stockdale in particular scores tries for fun at underage international level. The U19 prospect will almost certainly be in the starting team, but the question will be where as opposed to if.

All five started games throughout the Six Nations. Gaffney and Stockdale were expected to be the starters before injuries allowed Owens and Fitzgerald to capitalise. Fitzgerald took his opportunities, but Owens was dropped when Gaffney came back.

See Also: Ireland U20s: What You Need To Know About The Next Crop Of Rugby Stars

See Also: Our Prediction For The Ireland Team That Wins The Six Nations In 2020

See Also: Gif: Here Are The Best Tries From The Big Ireland U20 victory

Rugby
3 months ago
By PJ Browne
Seven Years After Leaving Munster, Danny Barnes Is Happier Than Ever
3

Football
18 hours ago
By Michael McCarthy
Watch: Irish Midfielder Opens His MLS Account With A Cracker
6