After Trying Week, Ireland Front Up With Statement Win Over The USA

Ireland finished out a tumultuous week on a high note in the RDS on Friday night when they defeated USA 20-10 in front of 2,500 people.

The build-up to Ireland v USA had been dominated by the fallout to Anthony Eddy's interview about the state of Irish women's rugby, and the reaction his comments inspired from a number of Ireland players.

The media controversy around the interview cast a shadow over Ireland's preparations for the game. Given the gutwrenching defeat Ireland suffered to Scotland in September and post-mortem that followed that result, Ireland were under pressure for a big performance last night.

After a messy start to the game from both sides, the young Irish superstar Beibhinn Parsons broke the deadlock after gathering a cross field kick from Stacey Flood and finishing brilliantly for the score.

What followed was an eventful seven minutes with the USA having a try disallowed and scoring through winger Bulou Mataitoga, before Irish prop Leah Lyons touched down.

Ireland lead 12-5 at the break, but were hauled back to 12-10 when substitute Elizabeth Cairns finished off a sweeping move for the visitors.

41-year-old prop Lindsey Peat restored Ireland’s seven point lead with a try in what was her final test appearance.

It was also fitting that it was scored in Ireland’s first game at the RDS Arena.

Stacey Flood added to her tally when she knocked over a close range penalty to put the game beyond doubt.

After the match, Ireland captain Ciara Griffin declared herself to be "the proudest person in Ireland tonight" when talking to RTÉ.

"They're solid, they pick you up when you're down, they always have your back, so I couldn't be prouder of that group.

"When you cross the line with your team-mates like that, you want to get the win. What it meant for us as a group, it was just all of us getting behind each other, backing each other, showing how together we are as a squad.

Coach Adam Griggs told the Independent Maloney was free to speak her mind.

"She's a human being and she has her opinions and she's free to speak those.”

“She took a course of action she thought was needed and the players have rallied around her really well.

"In terms of getting the message out there and what she wants to discuss brought it into the spotlight and we would never hold anyone back from speaking their minds and having their opinions.

“That's the world we live in and I'm glad that the players have shown the support they have for her and it shows that this is one squad who are united and committed to their common goal of being better rugby players for their country.

Hopefully the controversy stirred up this week and the call to arms for players, pundits, and fans, will increase the pressure on the IRFU to put the needed and deserved resources into the 15’s game, and build the platform needed for this Irish side to reach their full potential.

On the evidence of last night's victory, it certainly has made the Ireland team closer.

See Also: 'This Whole Team Back Cliodhna Moloney. She Is Not Alone' 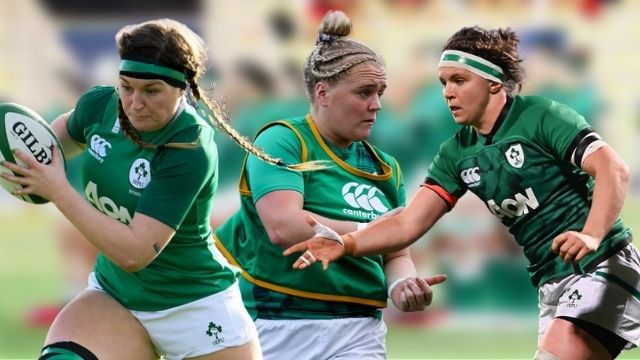