The Irish Natives Hoping For World Cup Glory With Other Nations

As always the Rugby World Cup will boast a sizeable hue of green. But the Irish influence isn't confined to Joe Schmidt's camp alone.

Such is the standard of rugby on these shores at present, players and coaches with connections in other countries have linked up with other nations to pursue their dreams of taking part at the Rugby World Cup. For some who haven't already achieved that ambition, the dream is about to become a reality.

Here are the Irish natives hoping to make a little history in Japan - just not with Ireland. 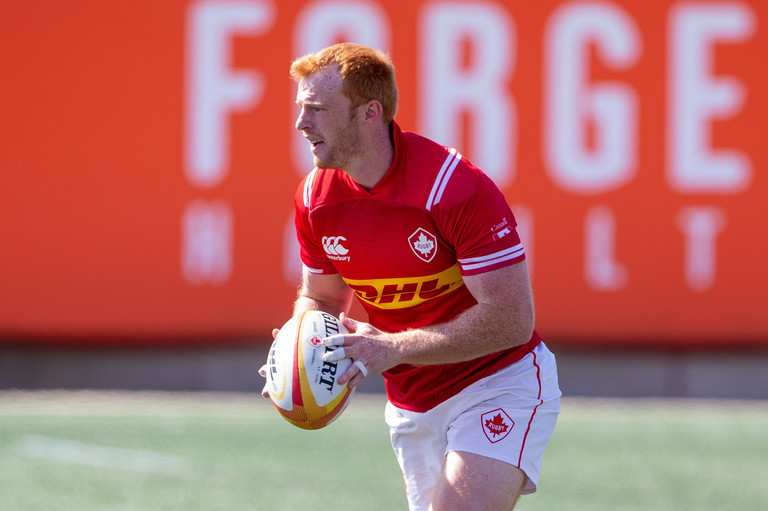 The Ulster man was not only considered surplus to requirements in the Irish set-up, he was released by Ulster at the end of last season. After eight seasons with the northern province and being a significant future prospect in the Ireland under-20 squad, the 26-year-old has experienced a tale of redemption.

At the 2012 Junior Rugby World Cup, the former Ulster man was in the side that famously beat the South Africa team who went on to win the competition on home soil. Also on that team were Tadhg Furlong, Chris Farrell and Iain Henderson among others who are currently in Japan with the Irish side.

But Nelson was offered a route towards resurrection earlier this summer when called up to the Canadian squad - he has a Canadian grandmother - and he already appears to have become the side's first-choice out-half ahead of former Connacht man, Shane O'Leary. In the country's last warm-up game before heading for Japan, he scored ten of his side's 15 points in their 15-20 loss to the United States. 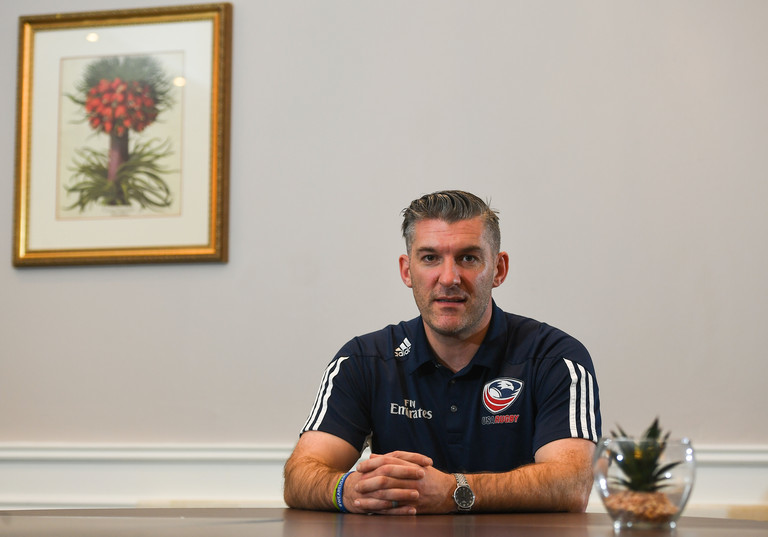 After a career as an "average AIL player" by his own admission, Greg McWilliams is soaring towards the upper reaches of the world's coaching sphere. Already he has worked with names like Robbie Deans, John Mitchell and Joe Schmidt. Moreover, he has been involved with the Irish women's sides at the 2010 and 2014 World Cups.

As well as spearheading the US Eagles attack, the former teacher is also the Director of Rugby at Yale University where he also performs the duty of Head Coach. But it's with the national team where he has made headlines, helping mastermind the national side's historic victory over Scotland last year.

The work will continue post-Japan for the coach after he was named the Rugby United New York head coach ahead of the beginning of the 2020 Major League Rugby season. 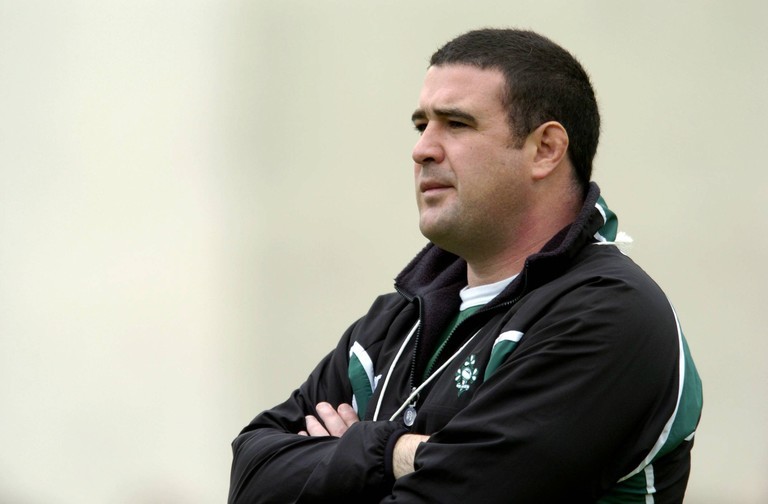 Over the last few years Mark McDermott has been spending over half his year in Russia, his time back home limited as a result of responsibilities he assumed with the national team in Siberia. Initially he was a forwards coach, until he then stepped into the role of Head Coach. Now, with the arrival of Welshman Lyn Jones, the former Ireland under-21 coach is back in familiar surroundings as a forwards coach once again.

One tie that will be at the forefront of McDermott's mind as he heads to Japan will be the country's third game in Kobe on Thursday, October 3 where his side will face Joe Schmidt's Ireland. The Russians will also be involved in the opening game of the tournament against hosts Japan tomorrow morning.

Language can be somewhat of a barrier for the Irishman, but he is lucky to have Vasily Artemyev in the squad. The winger is Russian's captain and having been educated at Blackrock College and UCD, he's fluent in English. Years of travelling from end-to-end of the largest country in the world, however, means the expat should be fully immersed in all-things-Russia by now. 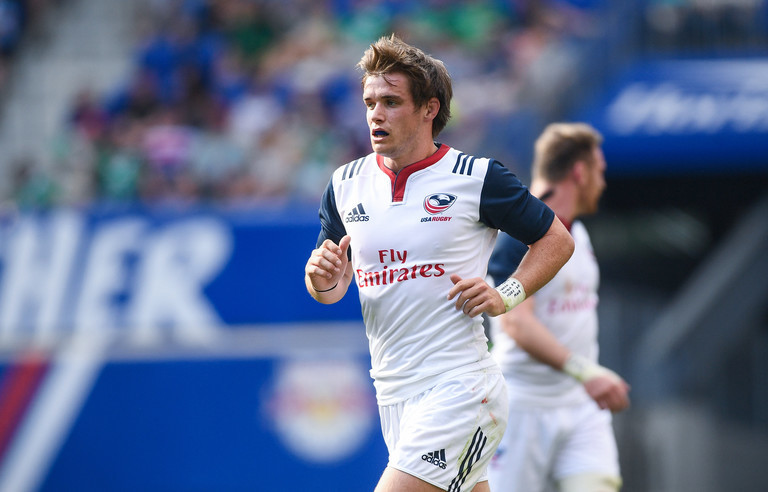 The Irish-born number-10 first came to our attention during the 2015 World Cup. Before the tournament he was called into the US Eagles squad and by the time the tournament commenced he had made the position his own. Having been educated at Blackrock College, where his father - Alan - is principal, the promising young talent went to third-level at home before obtaining a visa to live in New York.

His performances at the 2015 tournament also caught the eye of Connacht and Pat Lam signed him ahead of the momentous Pro 12 season that saw the men from the west win the competition outright in Edinburgh. On that day the US international started for the Connacht men and helped spearhead the western province to the biggest day in their history. But his performances that season didn't go unnoticed either.

Now, he's playing with Sale Sharks in the English Premiership. He's one of four Irish-born players named in the US Eagles squad for the quadrennial tournament and though a group consisting of England, France and Argentina will always be difficult to navigate, MacGinty's propensity for dashes of magic could pose problems for the tier-one nations 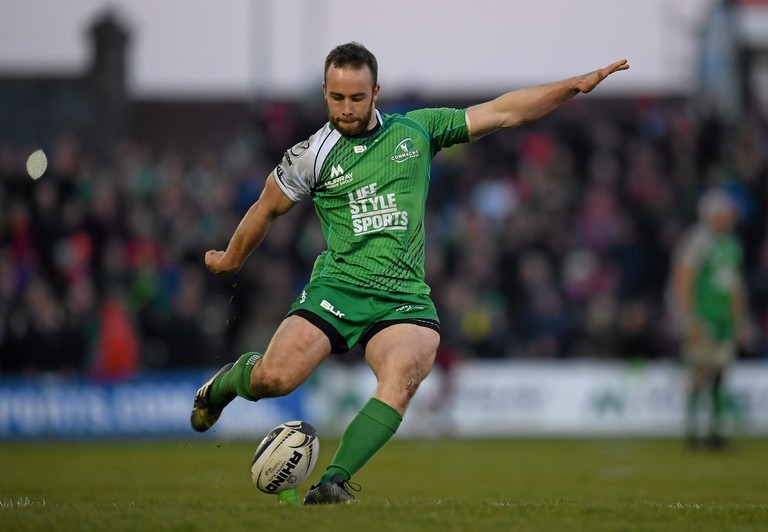 Shane O'Leary's international career began disappointingly. But after being overlooked for the Irish under-20 squad at the 2013 under-20 World Cup, he got in contact with the Canadian federation. His mother was born in New Brunswick and therefore he was eligible to play for the North American nation. They welcomed him with open arms and he ended playing in France at the tournament after all. That's resilience.

He had to wait until 2017 for a call-up to the senior side but, by then, he was already carving out a professional career for himself in the game. He was a member of Pat Lam's Connacht side that won the Pro 12 title in 2016, and he also had a stint playing for Grenoble where he worked with Bernard Jackman and Mike Prendergast.

Now, he plies his trade with Nottingham in England's RFU Championship. He faces stiff competition from Peter Nelson, the former Ulster man who was recently called into the national squad, for a starting berth but an intensive couple of weeks with four pool games means there should still be plenty of game-time for the Ballina Killaloe RFC man. 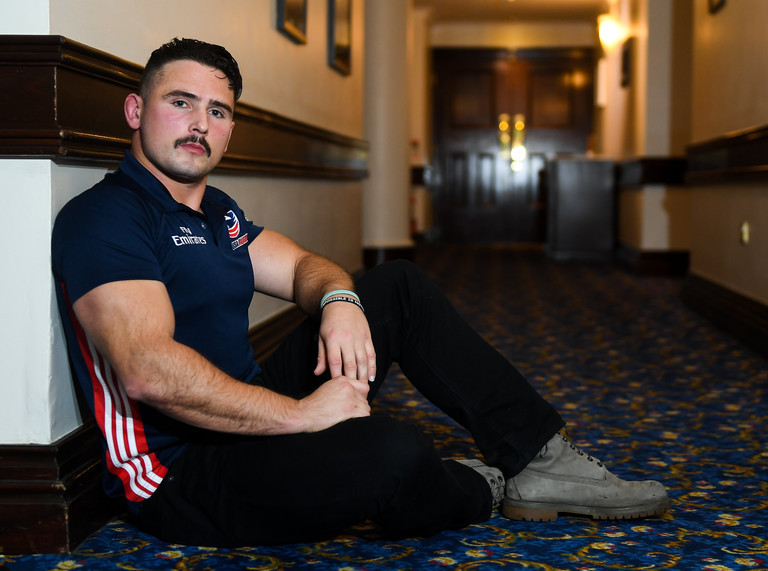 Five years ago the young Irish hooker travelled across the Atlantic to begin a Masters degree. A half-decade on and he's travelling halfway around the world again, but this time with his adopted country's rugby side at the World Cup. It's been an eventful journey.

The Greystones RFC man played for his local club in Wexford from a young age before going on to line out for Blackrock College in his teenage years. Following his years playing for the prestigious South Dublin school, he began playing for St Mary's. But the US soon beckoned, and once he arrived in his new surroundings he got back involved in the game immediately.

After grafting his way into contention for selection on the national team, he finally made his debut in 2018 and ahead of the tournament in Japan he is arriving into some fine form. In the side's final game before heading to Asia, the hooker came off the bench to score a crucial try from a line-out against Canada. 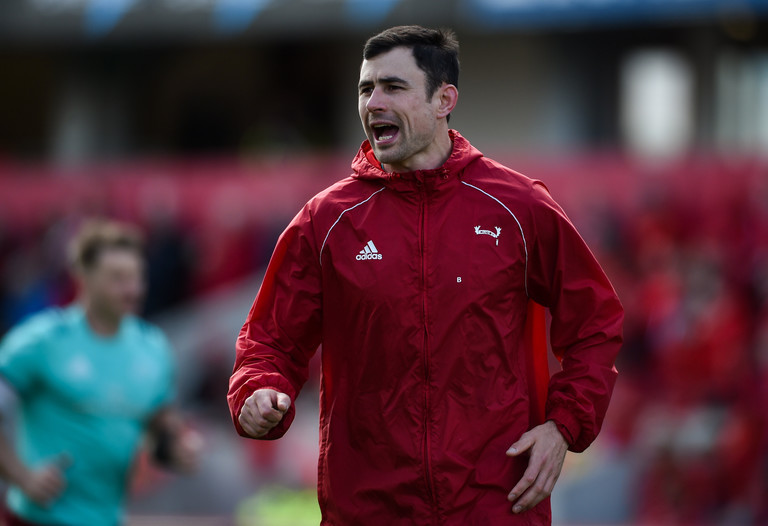 On the long list of worries for Joe Schmidt, Felix Jones' presence within the South African set-up must be somewhere near the top. The former Munster man was involved with the Ireland set-up on their tour of Japan in 2017 and is therefore familiar with many of the Irish tactics and plays. With a possible quarter-final meeting with South Africa on the cards for Ireland, Jones' involvement with the Springboks is of particular concern.

After hearing of Jones' appointment with the southern hemisphere outfit, the Irish head coach admitted the move was "awkward" for Ireland. He said:

He was with us, he’s seen everything that we deliver and would have a great knowledge of even the language we use in our camp, so it’s awkward for us.

Jones left Munster earlier this year, along with Jerry Flannery, in unusual circumstances but became a late addition to Rassie Eramus' coaching ticket last month. He had previously worked with Eramus at Munster as an attack coach and the full-back, who spent most of his playing career in Munster colours, is coming into an exciting set-up fresh off winning their first Rugby Championship title since 2009. Their unbeaten campaign included comprehensive wins over Australia and Argentina as well as a draw against New Zealand away from home. 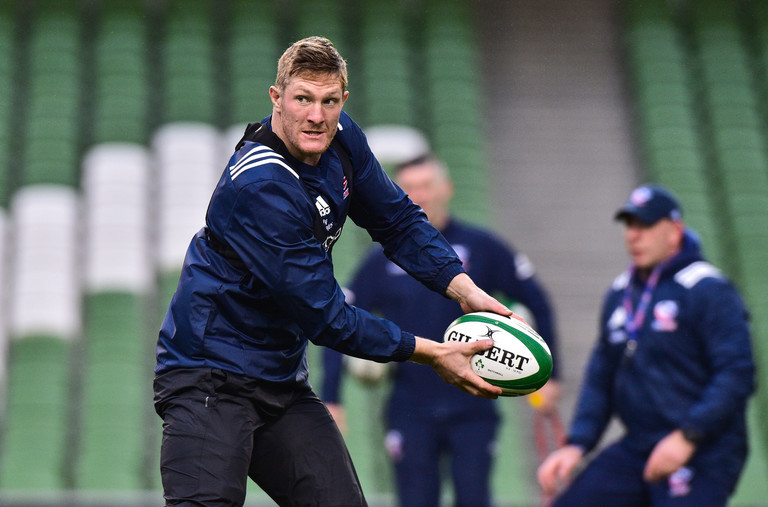 Already Quill is becoming a veteran on the US Eagles squad. The upcoming World Cup, for example, will be his second after he was first called into the squad back in 2012. Before emigrating to his adopted country he played for Dolphin, Munster and Irish underage squads, but he claims dual-citizenship and his path into the national US side was therefore a smooth one.

The nation's poor performance at the 2015 World Cup in England saw the Youghal native retire from international duty, but he was back again shortly afterwards and played a pivotal role in the country's narrow win over Scotland last year in Houston. As it happened he was involved for all eighty minutes on that day.

His strong foundations with both Munster and Dolphin have obviously held him in good stead with the Cork man scoring a number of tries since he first put on the Eagles jersey, And, despite a poor tournament four years ago, the country appear to have made significant strides since. 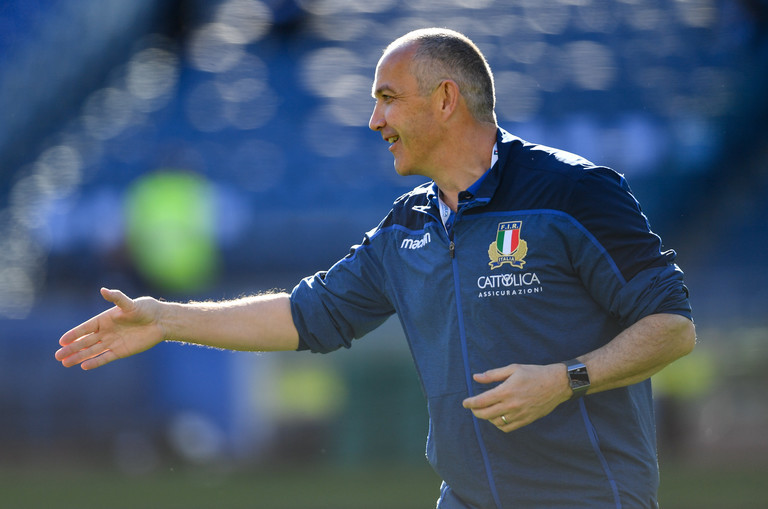 The future of the former Irish full-back remains uncertain. In a statement by the Free State Cheetahs back in May, it was announced that Franco Smith would be leaving the South African franchise to become head coach of Italy national side in 2020. The Italian federation quickly refuted these reports, stating: "no recruitment process for the National Team Head Coach position is in place."

Nevertheless, the 48-year-old is still in charge of the Azzuri and will have it all to do in a group containing New Zealand and South Africa. And unfortunately, recent results do not bode well for Italy's prospects over the coming weeks.

To an extent, O'Shea's time in charge of Italy has had success. He stepped into his current role in 2016 and although they have failed to win a single Six Nations game, O'Shea did mastermind a win over South Africa during his first year in charge. Should the erstwhile Harlequins director of rugby pull off the trick again, it could lead to a quarter-final showdown with Ireland. At the moment however, that seems outrageously fanciful. 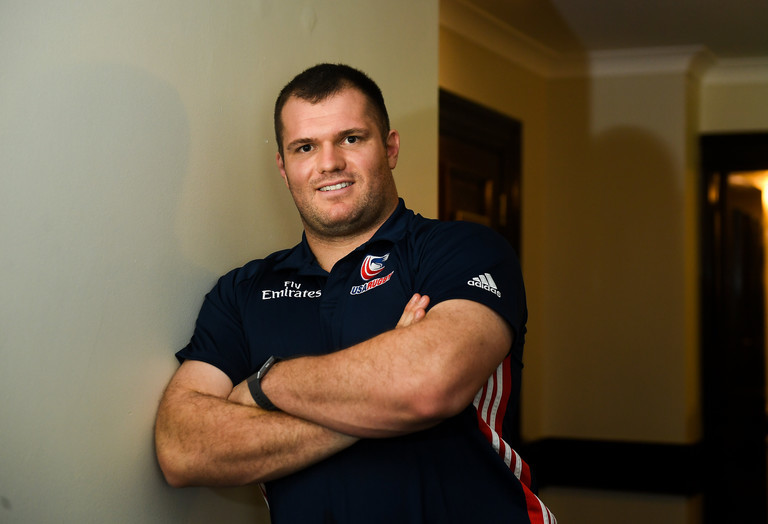 The tighthead prop from the Aran Islands was first called into the US Eagles squad last summer for their three June tests. He made his debut against Russia on June 9 and a week later he started again, making history with the country as they beat Scotland by a single point to earn their first victory over a first tier nation.

But 27-year-old's career in a US jersey began all the way back in 2011, when he represented the country at the under-20 World Cup in Tbilisi, Georgia. He qualifies to play for the country through his grandfather, PJ, who originally hailed from Boston, which meant the young prop was immediately eligible to line out for the country from the moment he moved over.

After attending Glenstal Abbey, he moved to America where he began studying at Texas A&M in College Station. Throughout the past decade, he has continued to play at a high level, first with the Houston SabreCats and then for a short stint with Newcastle Falcons.

SEE ALSO: Gareth Thomas: Journalist Told My Parents About HIV Before I Did

Rugby
3 months ago
By Gary Connaughton
Confirmed: Ireland Will Not Be Top Seeds For 2023 World Cup
Rugby
1 year ago
By Balls Team
'I Just Felt A Wee Bit Let Down That It Looked Like I Threw Him Under The Bus'
Rugby
1 year ago
By Gary Connaughton
English Media Reaction To South African Humbling In Rugby World Cup Final
Popular on Balls
GAA
23 hours ago
By PJ Browne
'Sport Gave Me An Outlet. It Gave Me Something To Channel That Anger'
Football
9 hours ago
By Donny Mahoney
Report: Shamrock Rovers Wunderkind Kevin Zefi Very Close To Move To Inter Milan