Opinion: Begrudgery Or Not Irish Rugby Needs To Address Its Private School Image

The dream is dead - already bound for the annals, where records of Ireland's World Cup heartbreaks look set to increase. Until a week ago we had been ruminating about something greater than a mere foray past the last-eight, and although we didn't amplify these sentiments to any great degree we were dreaming about something bigger, something symbolic perhaps, and something with an inexpressible sense of poignancy attached.

The components were there for a sequel of sorts to Invictus, the 2009 film which immortalised South Africa's seminal moment of glory in 1995. That victory was more than simply a sporting triumph. The Rainbow Nation, as we all know, had been riddled with the remnants of apartheid and those remnants had remained tangible within the stands.

When holding the Webb Ellis trophy aloft - to a stadium of all backgrounds and colours - Francois Pienaar had began the forging of a new future. 24 years on, we were buckling in for another political-cum-sporting epic. 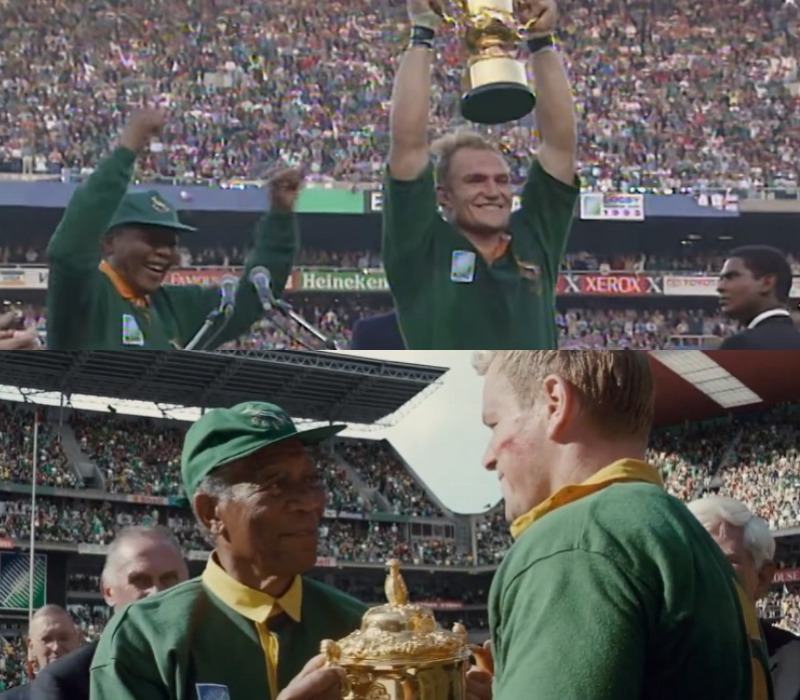 Dolph Lundgren as the Machiavellian Boris Johnson, intent on a scheme that would take his country out of the EU by whatever means necessary, whatever the consequences; Nicholas Cage as the ever-phlegmatic Leo Varadkar, attempting to secure the future of his island and all in the face of ultra-nationalistic tendencies; Tom Hardy, as the steely-dispositioned Rory Best, ignoring the backdrop of political petulance and turmoil as he attempts to lead four united provinces to a place they have never gone before; and with Liam Neeson as the all-knowing Joe Schmidt, Ireland defy the odds. All of this only two days after Brexit finally sparks into the sweltering inferno of division and gloom on October 31 - Brexit Day.

As Westminster and Dublin, Brussels and Stormont all climb that escherian stairwell, sport prevails as a beacon of unity. Coming soon to a cinema near you.

Oh, what could have been.

Instead, it's becoming increasingly obvious that if there's a story to become immortalised, it's Japan's - or that of the cluster of second tier nations who have been consigned to the scrap heap, only to be recalled for the quadrennial showpiece. A ten-team tournament isn't goint to whet much of an appetite.

Tier Two nations shouldn't feel too neglected however, having been subject to life in this caste system, dumped into a stratum where support from above is minimal at best. For a conservative Tier One nation like Ireland operates a similar system at home. The great irony of it all is the systematic employment of this narrow-minded approach arguably bridges the gap between teams such as Ireland and Japan, as was evident last weekend in Shizuoko. 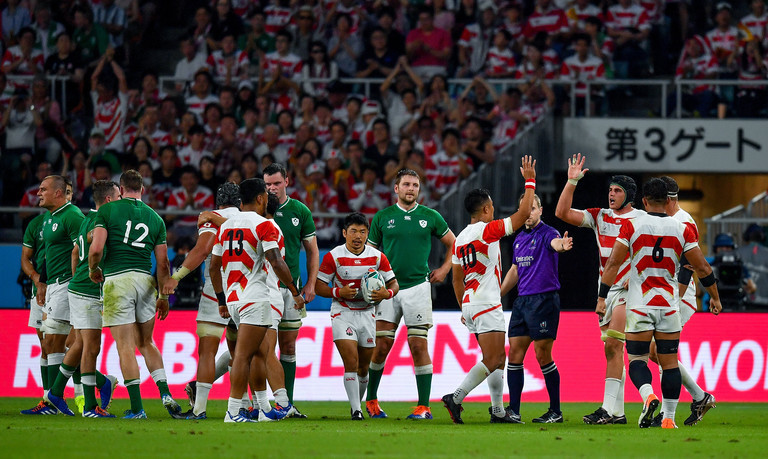 A 35-point win over Russia five days later not so much papers over the cracks as covers up a fissure with gossamer.

Had Johnny Sexton been playing, it's argued, things would have been different, and we wouldn't be in this aituation heading into a tie with Samoa this weekend. But that same rational applies to Mickey from Drumsna and John Joe from Aghaloo, only neither made the plane to the Far East in the first place. Indeed they never even held a rugby ball, believing it simply wasn't a sport for their ilk.

Mickey could have had the ferocity of Lomu, the feet of Habana, the Campese step. He could have been the source of magic when backs were to the wall.

The burly Aghaloo man had all the makings of a one-man wrecking machine in the pack. Slot him into whatever front row, alongside Jar Jar Binks and a wobbling drunk, and he'd still wreak havoc come scrum-time. But rugby wasn't for them. Had the pair, along with thousands of others, not felt ostracised as youngsters Ireland could be marching into their last pool game undefeated, but they were never felt welcome among the alickadoos and little has been done to prove those feelings wrong.

A "Team of Us" campaign two decades on isn't going to turn back time..

Is there an appetite for change? The evidence to suggest there is isn't exactly overwhelming. 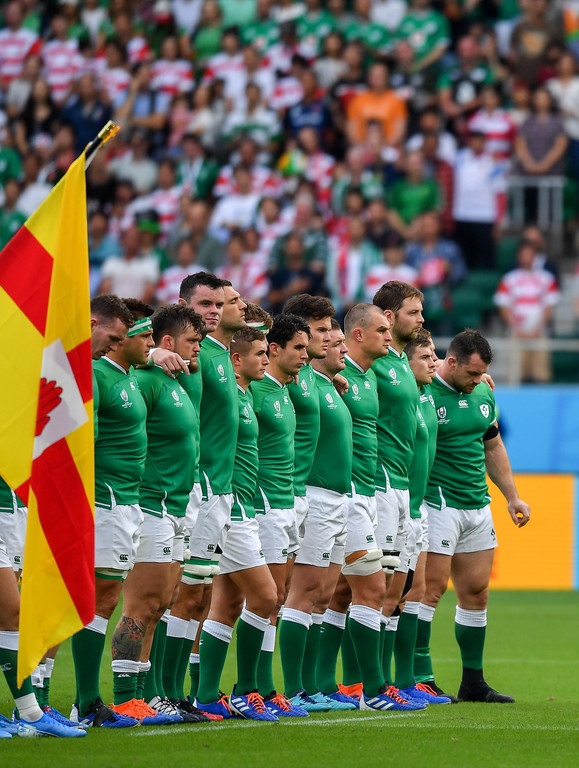 Of the 388,281 students that attended post-primary schools in the Republic of Ireland last year 25,600 were enrolled in fee-paying schools, just over 6.5 per cent.

What percentage of the 31-man panel in Japan attended fee-paying institutions?

Casting aside the project players, somewhere between four and seven per cent would probably be a healthy representation and that certainly isn't the case. The statistics have been well-documented, and they don't make for pleasant reading for those who think of the sport as inclusive.

Of the 23 Irish players that received a post-primary education in the Republic of Ireland, 16 attended fee-paying institutions. Of the seven who received free education four attended either St Munchin's or Ardscoil Rís in Limerick, schools which have been somewhat of an anomaly within the system by remaining a force, leaving the Marist College pair of Robbie Henshaw and Jack Carty, along with Tadhg Furlong of St Augustine's and Good Counsel in New Ross as the only players to overcome the obvious barriers.

While the Northern Ireland education system is a little more complicated in structure, more could also be done there to attract a larger playing base from non-traditional areas, the four Northern-Ireland-educated players in the squad coming from acknowledged rugby institutions.

These statistics have been discussed at length, and sometimes dismissed, but the issue still requires addressing, even if there's a belief that Irish Rugby is becoming a little more open-minded.

Moreover, the statistics add another dimension to the nation's recent successes: If the country can achieve what they have from such a narrow base, what's possible if the potential of the entire island is optimised? Bemoaning the absence of true equality throughout the sport can be easily mistaken as begrudgery when, at times, it's mere disappointment at the failure to optimise more human resources on a small island.

Rugby has a chance to defy the division occurring elsewhere in society and thus convey itself as a sport for all cultures and all classes. Alas, as of now, it has an incredibly long way to go. The Hollywood carpet gathers dust.

Rugby
1 week ago
By PJ Browne
'Getting That First Kick Vs England Was Huge. 8 Years Ago I Couldn’t Kick For My AIL Team'
Previous Next

Rugby
2 days ago
By PJ Browne
Ireland's 2007 Grand Slam-Winning U20 Team: Where Are They Now?
Rugby
3 days ago
By PJ Browne
'I Was In The Tractor The Other Day Thinking How Lucky Farmers Are'
Rugby
1 week ago
By PJ Browne
'Getting That First Kick Vs England Was Huge. 8 Years Ago I Couldn’t Kick For My AIL Team'
Popular on Balls
The Rewind
17 hours ago
By Gary Connaughton
The 10 Types Of Irish Men You'll Find During A Heatwave
1