Billy Burns, Ross Byrne, Jack Carty, and newcomer to the scene Jack Crowley all had a chance to impress Andy Farrell this weekend, and all four did fairly good job of it. It confidence to fans that the outhalf situation in Irish rugby is in good stead heading into the Six Nations

It should have been four wins from four for the provinces only for Connacht to lose in the last minute to Leicester, after being 28-10 ahead early in the second half.

Indeed this showed both the brilliance of Carty but also a potential weakness of his game, a perceived inability to close out a match.

Carty made mistakes, but poor kicking and unforced errors were made across the entire Connacht side, and an under-pressure scrum was no fault of the number 10.

He showed fine game management and attacking control to get Connacht their initial lead, and given his performances over the last year and the possible absence of Joey Carbery at the start of the Six Nations, he is very likely to be part of Farrell’s Six Nations squad.

Leicester’s head coach Steve Borthwick was also full of praise for Carty, commenting after the game that, “they are an incredibly smart team and I’m always reticent to pick out individuals but Jack Carty, he was incredible. He is a fantastic player and the way he manages a team is just brilliant."

Ross Byrne started for Leinster in their demolition of Montpellier, and continued his streak of incredible consistency of performance, before being substituted in the 49th minute for Jonny Sexton.

Ross Molony touched down to seal the bonus point in just 23 minutes!

The third-fastest bonus point ever secured in the #HeinekenChampionsCup... pic.twitter.com/Q1aqO2vyzY

His selection ahead of his brother bodes well for his Irish chances, and with another huge European game next week which he will likely be involved in, he is firmly back in the frame for the Six Nations.

The newcomer to the scene is Jack Crowley, although given Farrell’s selection history it will likely be too soon for him to secure a place in the Six Nations squad, although he may sneak in as a development player.

Standing in for Ben Healy away to Castres, was the perfect environment for the young flyhalf to get high pressure European experience.

He performed admirably, kicking three penalties and a clutch conversion, and was talked up by Johann Van Graan post-match.

“Before the game, I said to him, ‘Just go and enjoy it, lead us forward.’ Really happy with his performance. It was such a difficult night in terms of it being extremely cold. Castres put a lot of pressure on us, they just kicked the ball straight back to us.

“It was a real kicking battle and he kept his nerve. I think the most impressive thing was that last conversion that gave us the three-point lead. I am really happy for him to get the 80 minutes and you know, it just shows that he is a class player."

Billy Burns will be hoping to make a comeback to the Irish rugby squad having been a favourite of Farrell’s during the early days of his tenure.

However, despite Ulster’s victory he won’t have been pleased with going off after 55 minutes to be replaced by Ian Madigan.

Nathan Doak was also taking Ulster’s kicks in he absence of John Cooney, and a lack of goal kicking practice for Burns will count against him. 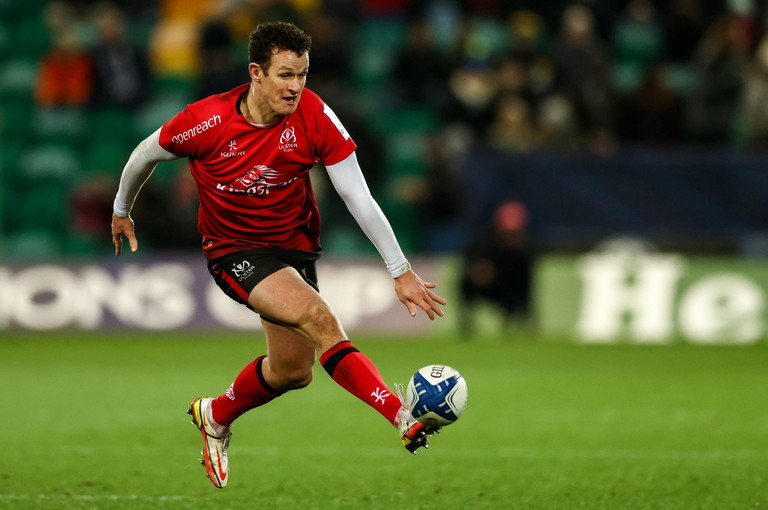 16 January 2022; Billy Burns of Ulster kicks the ball through during the Heineken Champions Cup Pool A match between Northampton and Ulster at Cinch Stadium at Franklin's Gardens in Northampton, England. Photo by Paul Harding/Sportsfile

Injury permitting, Carty will likely play back up to Sexton in February (if Carbery is to miss out on the start of the tournament), but the third choice 10 is anyone’s guess, with the Byrne bros, Burns, Healy, and Crowley all in with a shout. 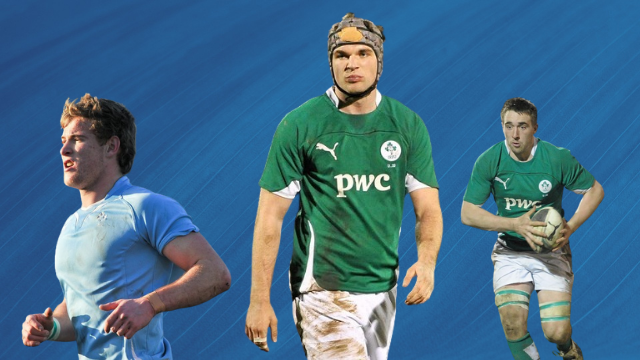