France's Grand Slam hopes have been dashed by a heartbreaking defeat at Twickenham this evening. Maro Itoje's late try would prove to be the difference between the sides, with the Englishman getting a helping hand from an Irish official.

It was an incredibly entertaining game of rugby, with both teams looking like they were going to take the initiative at various stages throughout.

France led for most of the game, with a try inside the opening minute handing them the perfect start. They played some brilliant rugby at times, with this try just before the interval probably the most impressive passage of play in the game.

However, England stayed within touching distance throughout the game. They were trailing 20-16 heading into the final few minutes but a late try from Itoje got them over the line.

The Saracens man had been criticised for his performances in this tournament so far after giving away a huge number of penalties in the losses to Scotland and Wales.

It was pick and go that handed the English the victory, but the referee initially felt that the ball had been held up by the French defender.

It would go to a TMO review, where Irish official Joy Neville would eventually indicated that a try should be awarded. It was a big decision to make on an incident that wasn't a straightforward one, with the TMO often just going with the referee's decision in such circumstances.

ITOJE WINS IT FOR ENGLAND! 😲

While it was a very tight call, replays do seem to indicate that the ball was just about touched down before the French defender got a hand underneath it.

After the game, Ronan O'Gara labelled the Irishwoman's decision as a 'brave' one in the Virgin Media studio after the game.

It's a brilliant decision from Joy Neville I thought, a courageous decision to overrule the referee.

Neville made history by becoming the first female official to act as TMO in a Six Nations game earlier this year. 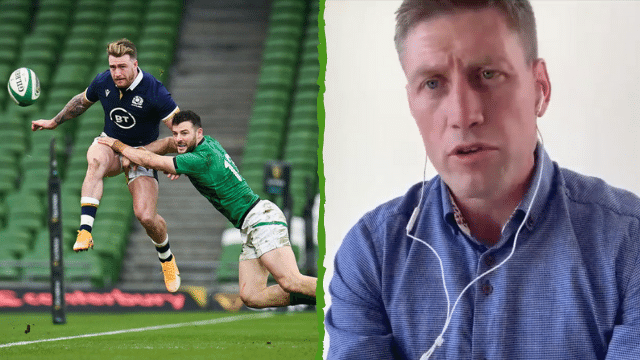 Rugby
1 day ago
By Colman Stanley
Roy Keane Made Quite An Impression On Eddie Jones And The England Rugby Team
Rugby
1 week ago
By Gary Connaughton
Williams & Quinlan Worried By Ireland's Fly-Half Options Ahead Of Six Nations
Rugby
1 week ago
By Colman Stanley
Heaslip And Quinlan Say Tadhg Beirne Has To Start For Ireland
Popular on Balls
Rugby
2 days ago
By Colman Stanley
Keith Earls Shares Story That Captures Andy Farrell's Decency
Football
2 days ago
By Eoin Harrington
Quiz: Name Every Player To Score In A Champions League Final
Football
1 day ago
By PJ Browne
'If He Continues With Performances And Goals Like That, Stephen Kenny Will See It'
Football
15 hours ago
By Gary Connaughton
Portsmouth Likely To Retain Gavin Bazunu This Month Despite Championship Interest