The country's Fair Work Commission had ordered the two sides to a closed-doors mediation hearing in a bid to avoid legal action over a dispute that has polarised Australia.

But Folau and his camp emerged some four hours later with no settlement.

"Very, very disappointed by the outcome today," said the devoutly religious Folau. "I'd like to thank those who've supported me throughout this time. I'll continue to stand up for the freedoms of all Australians."

The case is now expected to head to the Federal Court and could potentially drag on for years.

Super Rugby's record try-scorer, who was on an Aus$1 million-a-year (US$700,000) four-year contract, is reportedly seeking Aus$10 million, including for lost sponsorship and marketing opportunities, a sum reports say could be ruinous for Rugby Australia.

The sport's governing body said it too was "incredibly disappointed".

"We remain confident in our processes and will continue to do what is required to defend the values that underpin our game," Rugby Australia and NSW Rugby said in a brief joint statement.

Folau was fired in May for breaching Rugby Australia's code of conduct after posting that "hell awaits" gay people and others he considers sinners.

The fullback took his case to Australia's Fair Work Commission, asserting that he simply posted sentiments from the Bible and was unfairly dismissed.

However, Rugby Australia insists his sacking was purely contractual, saying Folau had agreed not to disparage anyone over their sexual orientation following a similar controversy last year.

Hopes of a resolution were slim with the two sides trading barbs beforehand. 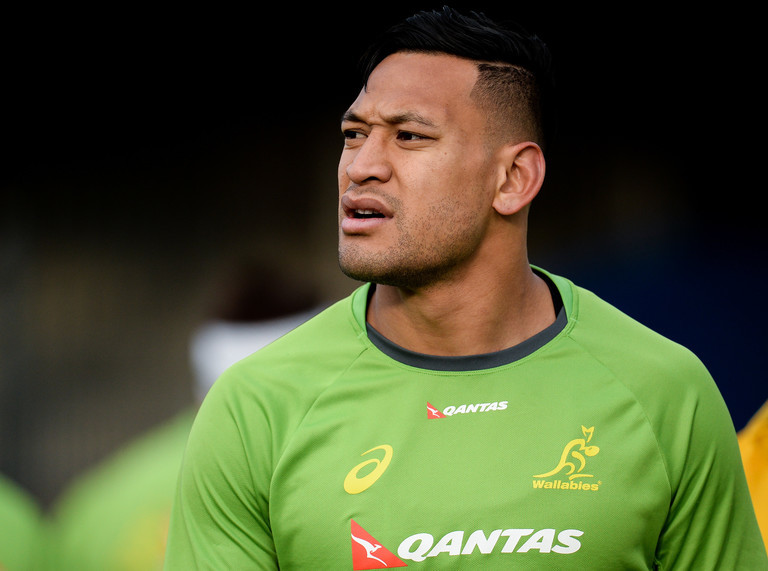 Folau claimed in a television interview Thursday evening that Rugby Australia offered him money to take down the offensive post, but said, "I couldn't live with that".

Before the hearing, Folau released a video on his website demanding an apology and an admission that his sacking was wrong.

"First and foremost, I am hoping for an apology from Rugby Australia and an acknowledgement that even if they disagree with my views, that I should be free to peacefully express my religious beliefs without fear of retribution or exclusion," the 30-year-old said.

Rugby Australia chief Raelene Castle set out the organisation's stance in an email to the rugby community, saying it had "acted with complete professionalism and integrity at all times".

"This is an employment matter and does not concern his religious beliefs or his ability to express them freely," she said.

The dispute has proved divisive, with many outraged over Folau's comments but others, including the Christian lobby, defending his right to free speech with calls for better guidelines on religious expression.

Prime Minister Scott Morrison, himself an evangelical Christian, said such disputes showed the need for legislation protecting people against discrimination based on their faith.

"Religious freedom is one of the cornerstones of what we are as a country, and it's important our laws reflect that," he said in a televised interview Friday from Japan, where he is attending the G20 summit.

"Now we committed to put in place a Religious Discrimination Act. We're going to do that. We're working very hard on that right now," he said.

Folau launched a crowdfunding campaign to pay his legal fees, but it was shut down after raising more than Aus$700,000, with the GoFundMe platform saying it would not "tolerate the promotion of discrimination or exclusion" and that the donations would be refunded.

In response, the Australian Christian Lobby launched a new fund and raised more than Aus$2 million in two days before pausing the appeal Thursday, saying it had enough money "for now".