When former Ireland hooker Bernard Jackman was asked for a player to watch before the Ireland U20s opening Six Nations clash with Scotland on Friday, the RTE pundit immediately responded with one name.

"I am really looking forward to seeing Jack Crowley from Bandon," he said.

The Cork Con and Munster youngster was making his debut for Noel McNamara's side after several impressive performances in the AIL. For the second successive year, a Munster product thrived at outhalf.

In 2019, both Jake Flannery and Ben Healy impressed at number 10. 2017 saw Conor Fitzgerald, currently in the midst of a superb season with Connacht, feature in the position. In 2016, Bill Johnston was the man. He has since departed for Ulster in search of more game time.

Crowley, Healy and Flannery's emergence is a welcomed development for a province who have endured considerable difficult replacing the sizeable void left by Ronan O'Gara. The arrival of Leinster product Joey Carbery was a shrewd move towards a solution but injuries have delayed the rewards from that.

Interesting, it was O'Gara who recently sat down for a consultation with fellow Corkman Crowley and he was immediately taken with his 6'1, 88kg frame: "O'Gara could not believe the size of him! The physical development for a lad just out of Bandon Grammar," revealed Donal Lenihan during the game.

He used all of that bulk to touch down for the opening try at Irish Independent Park as he powered over from five metres. 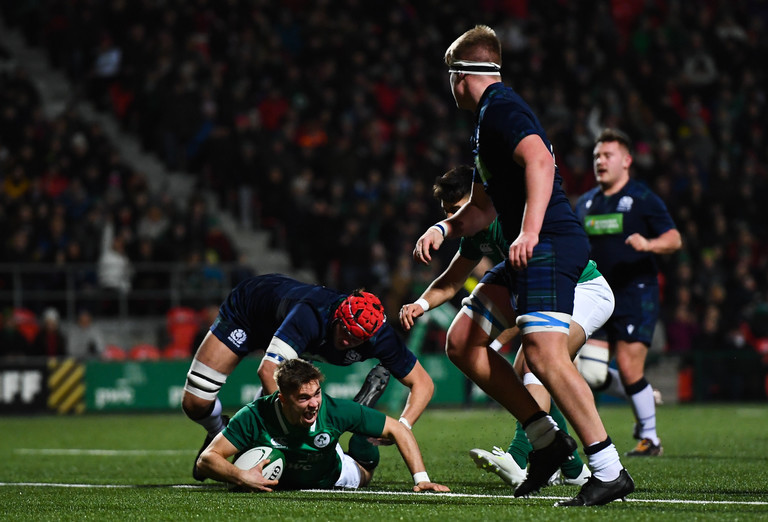 The fact he attended that west Cork school is a crucial factor, as Lenihan told Balls.ie last year. Until recently, this was a region with little rugby presence. But it was here where Crowley encountered one creative coach.

He was with Bandon for a few years and had most of the guys playing for Bandon Grammar back at U12s level. He is leading the revolution in Toulouse rugby now. I saw him in action with Bandon junior team playing Con one day. He clearly had a big influence on those kids.

Crowley was shown videos of Teddy Iribaren and other French outhalves under Sonnes' tutelage and he demonstrated elements of this flair during a man of the match showing on Friday.

Rugby at this level is often variable and vague, as it should be when the priority is development rather than success. One key attribute, such as size or speed, can have a monumental impact that is later negated at senior level.

What was so impressive about Crowley's contribution was the fact that it was not one particular aspect that allowed him to excel, it was several.

His comprehensive skill set was on full display both with his boot and out of hand. 18 points is a remarkable haul, even more so when it comes during a debut.

Crowley set out his stall early on.

In the opening period, Ireland crash up off a scrum before going wide to Crowley. The attacking structure is a typical 1-3-3-1.

The outhalf carries hard to the line, forcing the defence into a decision. They are caught flatfooted and Crowley fires a great pass to Thomas Ahern who breaks through the gap.

Play eventually is called back for a marginally forward pass from Ahern. Note Crowley's desire to further contribute and strong support line after the pass.

Eventually, his willingness to attack the line paid off in a big way. Outstanding footwork and acceleration allowed the 19-year-old to burst through a gap and score a sensational field length try.

His kicking game was similarly notable. 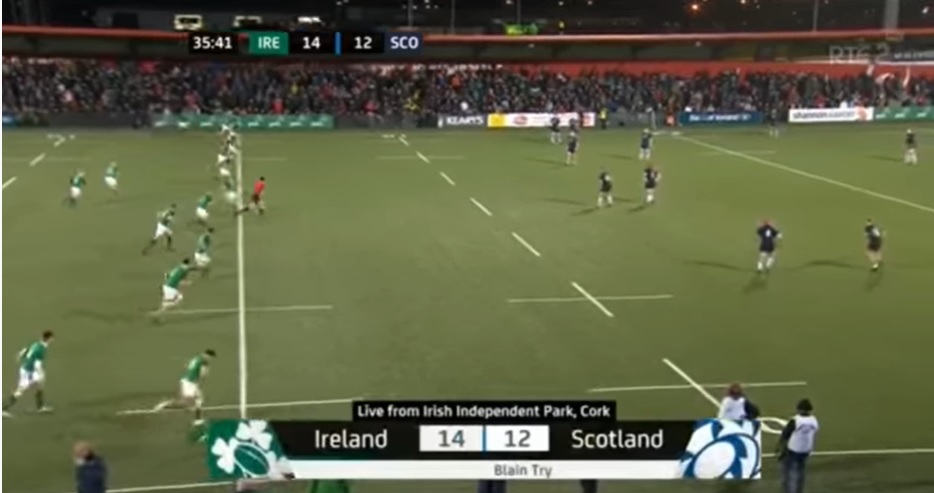 Ahern is able to get there and claim possession, giving Ireland an attacking platform in Scotland's half. 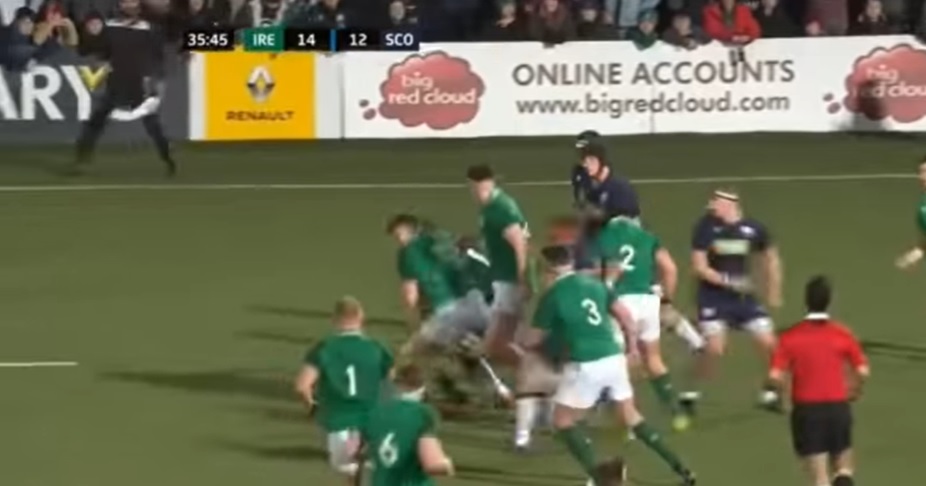 In the second half, he launches a crossfield kick from midway between the 22 and 10-metre line. 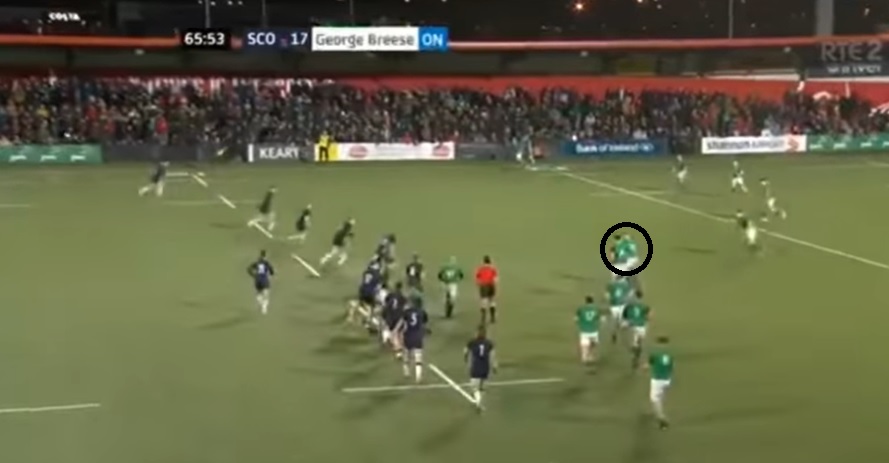 It lands just inside Scotland's half, Ireland are able to immediately pressurise the receiver because of the kick's accuracy. 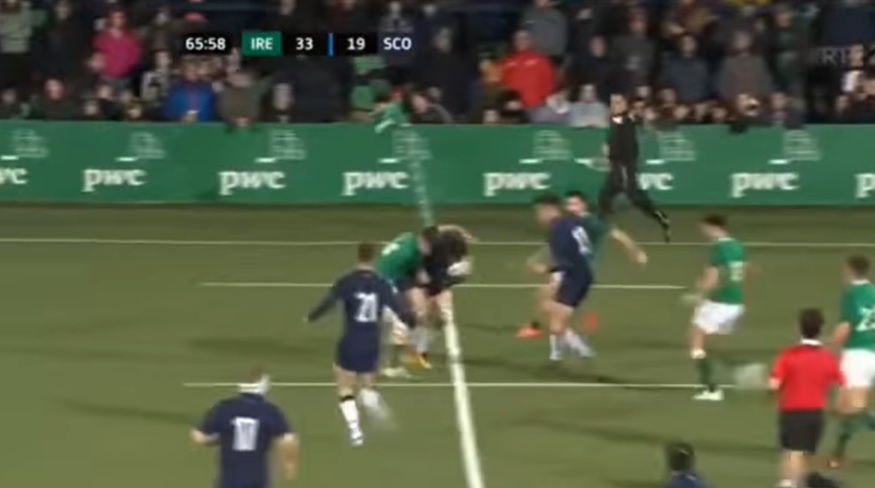 Ireland successfully turn over the ball a phase later. They end up between the 10-metre line and halfway. 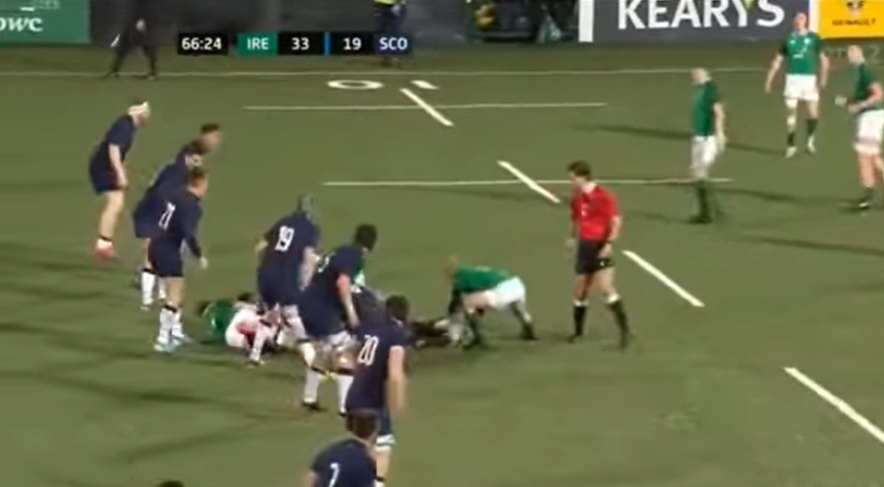 Like Healy before him, Crowley will continue to benefit from increased exposure. He is also developing versatility and has logged several starts at fullback for the Munster A side due to the logjam at outhalf. A carefully crafted plan will be required to ensure all prospects get the playing time they need.

A nice complaint for Munster and Ireland to have.

Rugby
3 weeks ago
By Dylan Ryan
Watch: Ireland U20s Star Lights Up Cork With Scintillating Try
Popular on Balls
Other Sports
11 hours ago
By Gary Connaughton
It's Six Years Since The Ill-Tempered Clash Of Wright & MVG In Dublin
56