Leinster topped off a stunning Pro 14 season in the best possible fashion last night, winning the final against Ulster to complete an undefeated league season.

It has been a remarkable time for the province, even if the season was broken up by the coronavirus pandemic. They were throughly convincing in their win last night, keeping Ulster scoreless from the third minute of the game after they scored the first try.

The atmosphere on the night was not the type we have become accustomed to in major rugby finals. Leinster were forced to lift the trophy in an empty stadium, with some members of their squad not even allowed to attend due to restrictions on numbers in the ground.

Despite this, winger James Lowe said it was a hugely proud night for everybody who has contributed to their season.

James Lowe was full of praise for the @leinsterrugby team effort to come back after the enforced break to win the Guinness PRO14.

It's got a good ring to it, doesn't it mate?

We're ecstatic. It's a pretty funny world we're in at the moment, but if we can bring a little bit of joy and top off that Pro 14 season unbeaten, it's outstanding.

We've got a squad of 53 that have played this year. The fact that only 30 or so can be at the stadium,  this is a huge team effort, six months off and for us to be able to come back.

We're not playing the prettiest footy at the moment but we're winning and that's the main thing. We've gone straight into knockout footy, managed to go unbeaten.

Like I said with 53 people there's 25 people sitting at home watching on TV and we've just won a championship.

It's awesome, especially when you talk about the Rob Kearneys and Fergus McFaddens, they'll go down as some of the greatest outside backs. They could come here, unfortunately not play but they can share in the joy.

Rob Kearney and Fergus McFadden did not feature in last night's contest, but there was a lovely moment after the game when the pair were the ones to lift the Pro 14 trophy.

Leinster will now turn their attentions to European rugby, with a huge Champions cup quarter final against Saracens on the horizon next week. 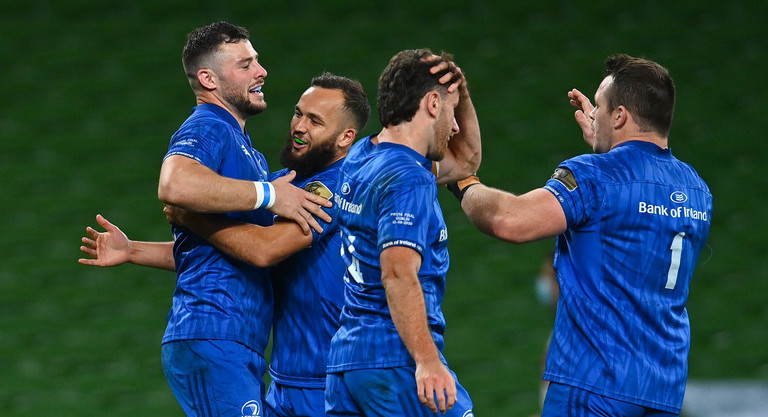