Jamie Cudmore: Leinster Can't Make The Same Mistakes We Did

No regrets, that’s one of the few rules I lived by during my career.

For any French team, nothing will focus the mind like Leinster in a European semi-final. During my playing career, there was always a mental lapse when French players didn’t have that fire under their ass. But when you are preparing for the defending champions, everyone is in the video room. Everyone is talking about different structures and plays that we can put in place. Everyone is doing their extras.

When I think back about when Clermont played Leinster in that 2012 semi-final, the overriding emotion is frustration. Like this weekend, then it was Leinster looking to cement their legacy. 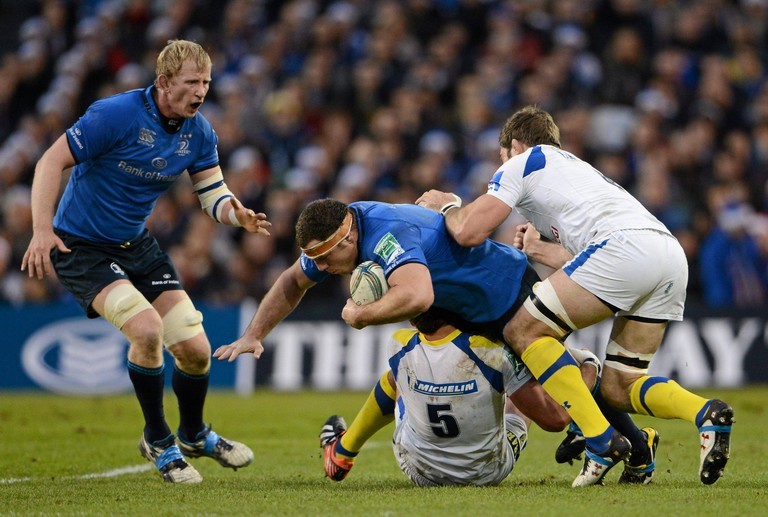 For European Cup games, you have to leave it all out there. I still vividly remember the final five minutes.

It’s 19-14 and we’re losing but attacking deep in their half. We were getting close, you just want to get over the line. Unfortunately, there’s that one sequence where Wes should have held onto the ball instead of reaching out for the line. Frustrating for sure.

In those years we’d come short in quite a few finals before that. The French Top 14 final in 2007, 2008, 2009… You get the picture. I never wanted regrets in anything I did. So you play to avoid regrets. That’s in the back of your mind during a tough physical session or at certain points in a game. It’s motivation to not hold back.

A lot of people talk about it being an issue with Clermont. Every year there was some problem in a semi-final or final where we just couldn’t quite get over the line. A pass that didn’t stick or a score that didn’t land. There’s frustration there on a personal and team level. It gave me easy motivation to make a difference in big games.

From a coaching perspective, we should have addressed that. If you have a major problem, it’s an elephant in the room. Guys talk, everybody talks. They talk in the physio room, around the coffee table. It needs to be addressed openly and honestly. It doesn’t need to come out in the media or be discussed amongst presidents or sponsors. Just complete honesty in the group. If you don’t have that you will falter.

Maybe that was a reason Clermont struggled over the years. There weren’t enough guys who talked about that. You need to take people to task to try overcome those issues. That’s not easy but it has to happen. 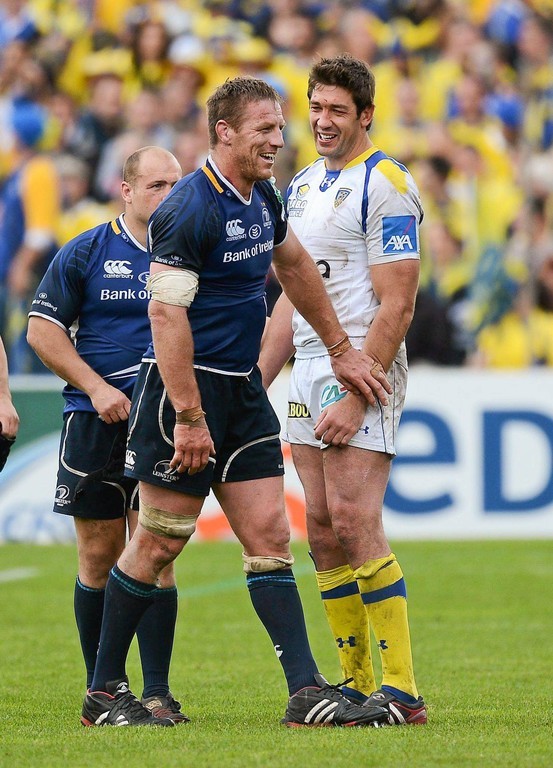 We had advantages and disadvantages. My second-row partner that day was Nathan Hines. He’d helped Leinster win their last European Cup and had given us a real insight into their line-out and in-close phase play. But the migration hadn’t been all one-way.

Joe Schmidt left his coaching role with us a season earlier to takeover over in Dublin. After three years working with Vern Cotter at Clermont, we knew what to expect from a team coached by him but it’s not always that easy.

One of his renowned moves is the bounce-back play, swing one way, then reverse it back across. Ireland do it regularly, so did Leinster. We knew all about it. Especially the inside ball off a ruck, yet that’s how they scored the only try of the game anyway.

The ball went left to a forward, then it was popped back right for Rob Kearney to step in and make a break. A pass later and Cian Healy touched down.

I got found out there. I was a bit late to get into my place and those things are typical Joe. Inside lines around a ruck, all those things we knew from when he was coaching us before.

The thing is good teams do that. You know what they are going to pull out, we’ve watched that in video, but they are that good they score anyway. That’s the sign of a real master. You know it’s coming, you’re not sure quite when it is coming but when it does it so fast and clinical. I remember thinking that. ‘Jesus. I was looking at this all week and they just blew right past me.’

You know what’s coming but you can’t stop it. 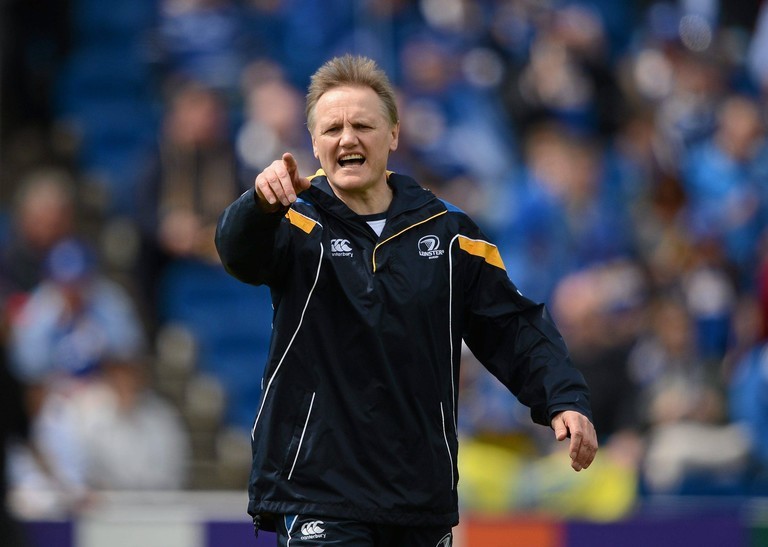 When we were attacking their line at the end, Schmidt came down from the box to stand behind the end-goal line and shout at his players.

Our S and C coach, Seb Bourdin, used to do that as well. We’d be attacking and he’d be screaming at us. You definitely hear that when you are attacking. He would be behind the line warming guys up. Then he used to come right close to the line, screaming at everybody to get latched or run a pick and go. But when it’s the opposition in the middle of the game, you don’t really notice it.

This Leinster team are similar to the 2012 one. They are extremely well-drilled. Everything they do is well thought out and in place. It’s done with precision and speed. That’s modern rugby these days, doing simple things at a high level of speed again and again. Be clinical. In France, we say ‘eficace’.

It works. It’s clean and concise.

He’s head coach now, but Leo Cullen played against us that day in 2012. Not many know this, but our paths nearly crossed long before that.

When I first went to Clermont in 2005, I was talking with Leicester as well. I had a chance to go there but I declined. I said no because I wanted to give it a go in France.

I guess they were speaking to many other players, but the guy they ended up recruiting was Leo Cullen. Maybe we could’ve played together. That could’ve been an interesting partnership.

Like Cullen, I’ve gone into coaching too. Working with Provence Rugby has been immensely fulfilling, but it is not like playing.

The great thing about being a coach is at the beginning of the week you are rocking. The worst thing is come the weekend, you’ve got to give the keys of the car to the boys.

You hope you’ve prepared them for every eventuality and have got systems in place so when they lose their way, they can find a map back or just weather the storm.

At least I don’t feel as sore come Sunday anymore.

I was in Marseilles last week to watch Toulouse play Toulon with my boy. The south of France, but it was three degrees and pissing rain. I might as well have been in Ireland.

Toulouse have come back to their old system, keep play going. In the Guy Noves era, he wanted to keep the ball alive. These little cells of three, moving quickly and getting offloads going. Kolbe, Ntamack, Dupont. These guys are trying to get forward and keep their hands free to get the ball away.

It’s a free system with players inside it that make differences. That’s where they are so dangerous. They have that reputation in France, they play 'a la Toulousain'. Playing with speed and taking risk. 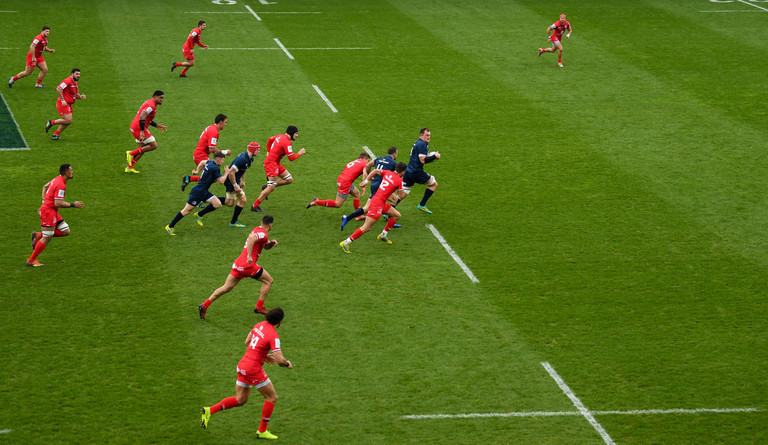 Looking forward to this weekend, that might be Toulouse’s downfall. They are not structured enough. The guys they have in Leinster must hang onto the ball. Strangle them. To me, Toulouse have a lot of game breakers but I’m not sure if there are enough game managers in the squad.

Leinster have to play like England did against Ireland in the Six Nations. Get the ball up in the air, put it in their end and use one hell of a defence to strangle them. When you have it, hold onto the ball. Beat them up front.

Toulouse are without their starting hooker. So now it’s a young hooker playing, combined with Devin Toner returning. The set-piece battle is massive, Leinster can make real in-roads going after the lineout.

This game will be won on what happens after lost possession. Think back to Leinster’s win over Ulster where they got a few tries thanks to errant kicking. That’s where Toulouse have interest. When it comes to counter-attacking, they have guys who can make a difference. They’ll afford Leinster opportunities too and ultimately it is vital they take them.

When the chance presents itself Leinster just have to take it.