'He Is A Very Sloppy Drunk But Great Value, He Rocks Up In Full Kit With A Gumshield'

The Saracens fullback - who was also named European Player of the Year following Saturday's game - tweeted a picture of his jersey, shorts and socks laying on the floor.

The 31-year-old celebrated for three days after the weekend's win against Leinster - all the time while wearing his full kit. 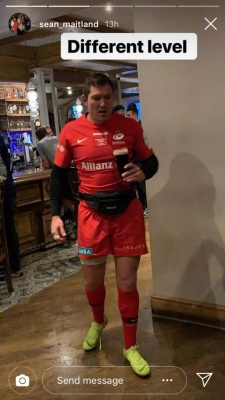 "He does it every year," teammate Jamie George told the BBC's Rugby Union weekly podcast.

It is a fresh shirt but he has been wearing it now for two days. It probably does need a wash.

He is a very sloppy drunk but great value. He brings a huge amount of energy when boys are hanging on the second day and he rocks up in full kit with a gumshield and mouldies on.

George said he was hiding in his house while being interviewed, unable to contemplate another day of celebrations. The Saracens squad spent Saturday night out in Newcastle and then Sunday in St Albans.

The English Premiership side came from ten points down to beat Leinster in the decider. Leinster took that lead with 32 minutes elapsed when Tadhg Furlong burrowed over from close range. It was also a phase of play in which Maro Itoje was yellow carded.

Standing under the posts, Owen Farrell who rallied his team.

"It was Faz who took control of everyone and basically just said, 'We've got two choices here: we either roll over and feel sorry for ourselves in the next ten minutes and let them get another score or we roll our sleeves up and get into it'," said George.

"We almost needed that sin-bin, it almost galvanised us and gave us a kick. We were doing OK but to take it to another level, we needed some motivation. Going down to 14, sometimes it can do that to you."

Rugby
6 days ago
By PJ Browne
Ireland's 2007 Grand Slam-Winning U20 Team: Where Are They Now?
Previous Next

Quiz
3 hours ago
By Mark Farrelly
Take Our Impossible 2000s Sports Quiz: Episode 5
Rugby
2 days ago
By Gary Connaughton
Brian O'Driscoll Has Picked His Lions Backline For The 2021 Tour
Rugby
6 days ago
By PJ Browne
Ireland's 2007 Grand Slam-Winning U20 Team: Where Are They Now?
Popular on Balls
The Rewind
9 hours ago
By Michael McCarthy
Watch: Aussie Cameraman Assaulted By US Police On Live TV, Prime Minister Demands Investigation