'I Can Talk About It. The Players Probably Won’t, But They Are Thinking About It'

There is a lot more than history riding on Ireland's eagerly-anticipated clash with New Zealand this Saturday, according to former Ireland back-row Jamie Heaslip.

A first home victory over the All-Blacks beckons for Joe Schmidt's legion, just two years after that historic day in Chicago when Ireland finally got over the line to secure a priceless victory. Heaslip was an integral part of that side and believes it was a crucial step in this team's progression. That sense struck him immediately after the final whistle as he began to leave the Solider Field pitch.

"It’s funny, you are coming into the changing room and you have Joey Carbery who is like 'yeah I came on, first Test, beat the All-Blacks, so what?' and I was like 'fuck you!'" Heaslip says with a hearty laugh.

"Man, I don't know. I’d played them nine or ten times at that stage and was thinking 'you’ve no idea how hard it is to beat these guys!' Now that that’s done, I think it’s going to be really exciting this weekend because that is gone.

"This whole we’ve never beaten them thing is not a talking point anymore. It’s now can we beat the best in the world, which we’ve done in the past. but can you do it now?" 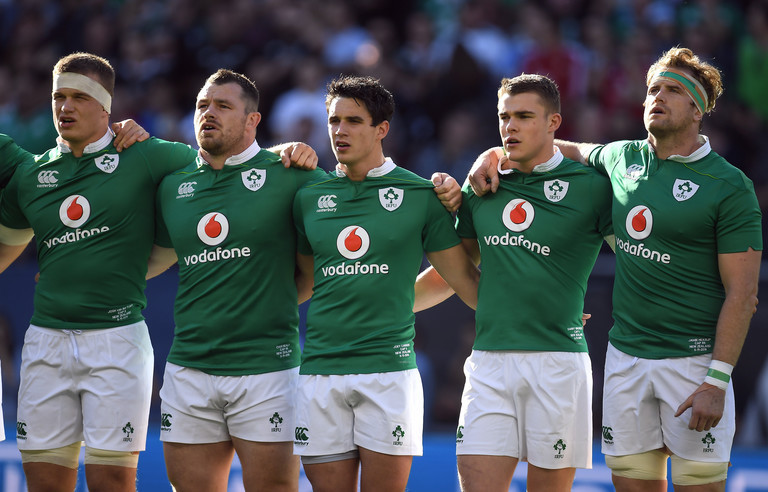 It is often said that a sports star dies twice, the first time is at retirement. Yet, Jamie Heaslip protrudes as an example of how this transition doesn't have to be turbulent. Retirement was an unexpected end for the then 34-year-old. A season-ending injury before the final 2017 Six Nations game became a career-ending one.

It was softened by the fact that he had enjoyed a stellar career which included over 100 test appearances and three Six Nations medals. Some tech investment mid-career keeps him busy post it all while approaches from broadcasters to do some punditry could now be accepted as he was no longer in the camp.

That 'player-turned-broadcaster' transition is not simple in itself. Working with Channel 4 for the November Internationals, Heaslip must now take a critical eye to former team-mates but is adamant it ultimately comes down to upholding a fair-minded process.

"It's a step-by-step approach. Church (Cian Healy), at the weekend, threw an offload that got intercepted and you say, ‘yeah he probably forced that one a little bit.’ You get on with it and I don’t think…it’s all about how you communicate.

"I’m trying to convey what’s unfolding and give insight on how a player views it and what their potential strategy is or their strength and weaknesses."

To his credit, Heaslip goes on to do that and admits Saturday's Aviva Stadium contest is a monumental point in building for a World Cup, even if the players themselves won't admit it.

I just think as a stepping stone to putting us in the right mind-frame to win the World Cup, see I can talk about it. The players probably won’t, but they are thinking about it. This is a big step to take. To be able to do it. I think the difference maker here and in Japan... We are going to have the squad, we are going to have the ability, you need a bit of luck on the field. That extra energy, that extra impetus can be our home support and our away support.

The irony for Ireland is that victory would be just the latest endorsement of Joe Schmidt's tenure, and another robust reason for New Zealand to come calling should Steve Hansen step aside after the 2019 World Cup.

Yet Heaslip is calm at the prospect of losing the 53-year-old. His contribution has been immense both for Leinster and Ireland, but both had and have the means to cope.

"I think that is what will happen in Ireland. He has brought them to a certain level, a certain standard, a certain expectation, that whoever will take it on next will want a layer on top of that and so on and so forth."

Vodafone, and former Irish rugby international Jamie Heaslip, are calling on Ireland fans to show their support for Irish rugby when they face New Zealand this Saturday and “Wear Green with the Team Of Us”.

Vodafone will be bringing fans closer to the team via social content, ticket competitions and instant match highlights for all of Ireland’s international matches on the My Vodafone app. See rugby.vodafone.ie for the latest #TeamOfUs news.

Rugby
4 days ago
By Jonathan Browne
No James Lowe As Ireland Squad Announced For Six Nations
Rugby
2 weeks ago
By Donny Mahoney
Call For 2022 Six Nations To Be Staged Entirely In England
Rugby
1 month ago
By Colman Stanley
TDs Suggest Freezing State Rugby Funding Until Resolution Of Dispute With Women's Players
Popular on Balls
The Rewind
1 day ago
By Gary Connaughton
Quiz: From Which Irish County Did This Company/Product Originate?
GAA
6 hours ago
By PJ Browne
Insane Drama As Late TJ Reid Goal Sends Ballyhale Into All-Ireland Final
The Rewind
2 days ago
By Jonathan Byrne
The Story Of Meat Loaf's Tour In Ireland During The Troubles Is Remarkable
Football
5 hours ago
By Jonathan Byrne
Roy Keane Enjoyed Dig At Harry Kane For Referee Bias Being 'England Captain'