Joe Schmidt seemed in good spirits in announcing his team for Ireland's massive crunch clash against France this Sunday afternoon. Schmidt sprung a few selection surprises in his announcement, but it was the absence of Jared Payne from the team that got the tongues wagging.

There was a signal that something was wrong when the team announcement was delayed by an hour, and the issue with Payne that was the apparent reason. Payne completed a full training session on Wednesday, but it was the swelling that persisted after training that has lead Schmidt to err on the side of caution for next's weeks quarter-final.

Ireland have already qualified for the quarter-finals, and Schmidt said that this had some bearings on his team. Should Ireland beat France, they will most likely face Argentina next Sunday. However, a loss will see Ireland play a day earlier against New Zealand - who would have two extra days rest.

Schmidt said this was a big reason why he decided not to risk Payne, and he was warying of aggrevating the centre's foot injury. The decision to withdraw the Ulster back sees Keith Earls continue his partnership with Robbie Henshaw from last week's narrow victory over Italy. Earls' performance last week, as well as his star showing in the Millennium Stadium in the warm ups against Wales were contributing factors for his selection over Luke Fitzgerald and Darren Cave. Fitzgerald's versatility to cover 11-15 is the reason why he got the bench spot. 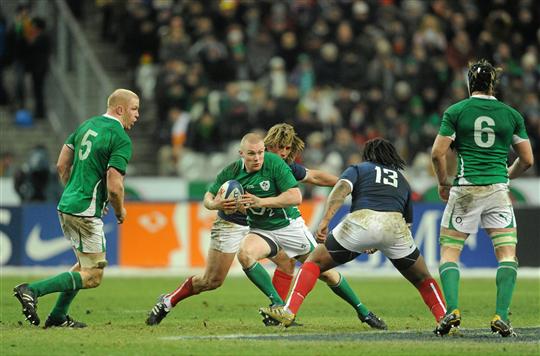 The selection of Earls does introduce the prospect of the Limerick flier attempting to stop the gargantuan Mathieu Bastareaud. Schmidt doesn't think that Earls will be directly matching up against Bastareaud, hinting that he may line Earls up to tackle the more elusive Fofana instead.

Next week is playing on Schmidt's mind, and he says the biggest incentive to beat France is to get an extra day's rest. He also hinted that there may be changes between the team for France, and next week's team - specifically at second row. Schmidt is looking for Toner's lineout abilities against the French, but referencing next week twice when giving reasons for why Henderson was on the bench.

Rugby
10 months ago
By Gary Connaughton
Watch: Siya Kolisi Gives One Of All-Time Great Interviews After RWC Triumph
Previous Next