Jennings & Williams Believe Byrne Should Deputise For Sexton Against France

Ireland's Six Nations campaign got off to the worst possible start this afternoon, falling to a 21-16 defeat to Wales in Cardiff.

Andy Farrell's side were facing an uphill battle right from the start after Peter O'Mahony's red card, and while they would fight on admirably, the one man disadvantage was ultimately too much to overcome.

Despite hanging on for much of the second half, Ireland did have an opportunity to launch one final attack deep into Welsh territory late on. However, Billy Burns would fail to find touch with the penalty. That was one of a number of mistakes the Ulster man made after coming on.

Johnny Sexton looks likely to be ruled out of the game against France next week after being withdrawn late on with a head injury, leading to some speculation as to who may start in his place in Dublin.

Burns was given the nod today, but could his struggles see him drop down the pecking order? Speaking on Virgin Media after the game, both Matt Williams and Shane Jennings said they would select Ross Byrne to start if Sexton is not available.

"It sounds cold and horribly clinical, but you can't make those mistakes."

Both @MattRCNM & Shane Jennings believe Ross Byrne should be the man to play next week if Johnny Sexton is ruled out. #WALvIRE #GuinnessSixNations #VMTVRugby pic.twitter.com/o3L4BOerwH

Williams: Ross Byrne. You get opportunities in international rugby, Billy had an opportunity today and it didn't work out for him.

I'm not saying that's over, but Ross Byrne kicking out of hand is probably the best in Ireland. He makes very few mistakes kicking out of hand and that was a huge deficiency today. You can't kick poorly against the French or they will cannon you off the park.

Jennings: I agree with Matt. It sounds cold and it sounds horribly clinical, but it's true. You can't make those mistakes and it didn't work out for him...

We regroup and get an opportunity at the end. We're not having a go at [Burns] here, but that's what happens when you're in the spotlight. You've got to convert in those moments.

You feel for him as a bloke. He doesn't mean to do it or want to do it.

We will get a clearer picture on this in the coming days, but it seems like taking Burns out of the firing line may be the best move for all involved. 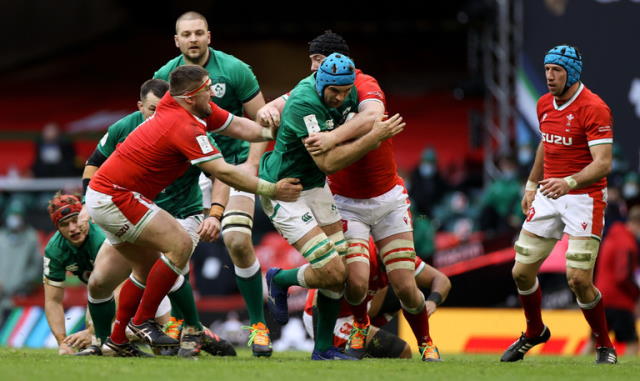