It's hard to argue with a coach as meticulous as Joe Schmidt. The Kiwi is renowned for over-thinking, analysing every aspect in his team, and he has the record to prove it. All of those Heineken Cups and Six Nations titles didn't just appear by accident.

No matter what team Schmidt puts out, we should know that he will have drilled the gameplan into them and will give those players the best chance of winning the game. But it's very clear that he trusts his system and those who know it over players in form. Schmidt has plucked for two players outside of their natural positions in place of naming one of the most in-form players in Ireland.

But I can't help but think that Schmidt has been a golden opportunity with his selection for Sunday's game against Wales. Irish Rugby is in a gloom that we haven't seen since the 90's. The provinces are flailing, and the public is crying out for some entertaining viewing that would revitalise the nation. Ireland very well might win against Wales on Sunday - but the team selection isn't as inspiring as it could be.

The news that Rob Kearney was an injury doubt for this game should have afforded Schmidt the opportunity to make an extremely exciting change that would still give Ireland the best chance of winning.

I am talking about moving Jared Payne to his natural position of full-back. The Auckland-born back has been derided publicly by the likes of George Hook for being a "second rate foreigner", while fellow professionals stand up for all the work he does for the team. And yet, when Payne plays full-back for Ulster - you don't hear any hint of derision. It's quite the opposite: Payne is lauded for his counter-attacking abilities and maximising the extra space afforded to him. At outside centre, Payne doesn't have those luxuries. He's still a good player, it's just that he's put in a straight-jacket to do a job while the crowd yawns our way through a nice victory.

Instead, Schmidt plumps for Simon Zebo at full-back, which is by no means not exciting - it's just not a fantastic match-up for Zebo. Simon Zebo is a fantastic player, and the space he gets at full-back is reason enough for him to move their permanently. But Zebo is still learning the position. He doesn't have the positioning sense that a Rob Kearney or Jared Payne would have. The only small issue with Zebo at full-back is if an opponent has a line-break, we can't be sure that Zebo will be in the right place to make the tackle. It will come with time, but he's not there yet. Payne affords you that security that is so important, as well as the X factor that Zebo has.

If Payne were played at fullback, it would mean that Stuart McCloskey could be thrust into action. The talented youngster is flying in his second season for Ulster, and his potential is close to unlimited. The problem is, Ireland don't know what to do with him. We've never had a centre who is that size, with that pace, and that skill. He's an amazing weapon for our arsenal, once we get used to playing McCloskey. 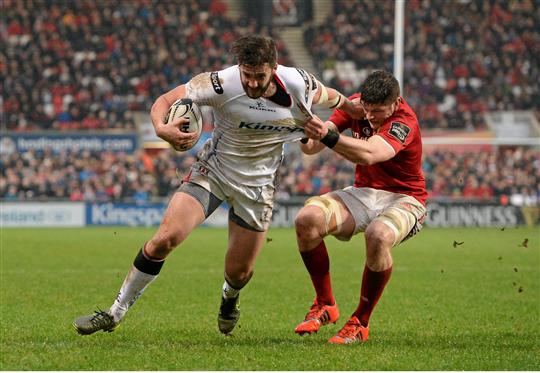 McCloskey's inclusion at centre would allow Henshaw to move out to outside centre - also his better position. Henshaw continually demonstrates the defensive nous from 13 with Connacht, and his attacking instincts are better suited to the wider open spaces than in tight at 12. Henshaw would run riot running off the big McCloskey, who draws in defenders and can offload to Henshaw. The thought has me salivating.

It's interesting to note that Schmidt himself mentioned the possibility of playing McCloskey and Luke Marshall after their form together for Ulster this season. This could leave the door open to seeing McCloskey at some stage in this championship with either Henshaw or Marshall.

In the end, Schmidt has gone with the tried and trusted Simon Zebo despite his mixed form in the last three months, compared to the unproven but in form talent of Stuart McCloskey. It's not the difference between winning and losing for Ireland; but it could be the difference between giving the nation a much needed lift or not.

See Also: The Confirmed Ireland Team To Take On Wales In The Six Nations

See Also: Eureka! Some Complicated Maths Have Predicted That Ireland Will Win The Six Nations

Rugby
1 week ago
By Gary Connaughton
Watch: Simon Zebo Receives Red Card For Dangerous Ulster Tackle
Rugby
1 month ago
By Jonathan Browne
Stephen Ferris Names His Three Stand-Out Performers From Ireland's November Internationals
Rugby
2 months ago
By Colman Stanley
Five Questions For Andy Farrell Ahead Of The November Internationals
Popular on Balls
Hurling
1 week ago
By Balls Team
A Tribute To GAA Players Who Looked Significantly Older Than Their Age
Rugby
2 days ago
By Colman Stanley
The Fascinating Journeys Of The 2012 Ireland's U20 Rugby Team
Football
1 day ago
By Gary Connaughton
Some Pundits Are Revelling In Rafael Benitez's Everton Sacking
32