Joey Carbery Set For Munster Return After Year Out

For the first time in more than a year, Joey Carbery has been named in a Munster matchday squad.

The out-half has been named on the bench for his side's Pro14 game against Cardiff Blues on Friday.

Due to an ankle injury initially picked up during a 2019 World Cup warm-up game against Italy, the last time that the 25-year-old played for the province was against Ulster in early January of last year.

Should he make an appearance off the bench against Cardiff, Billy Holland will overtake Ronan O'Gara to become the second most capped Munster player ever. Holland has made 240 appearances for the province.

See Also: Plenty Of Changes As Ireland Team To Play Italy Is Named 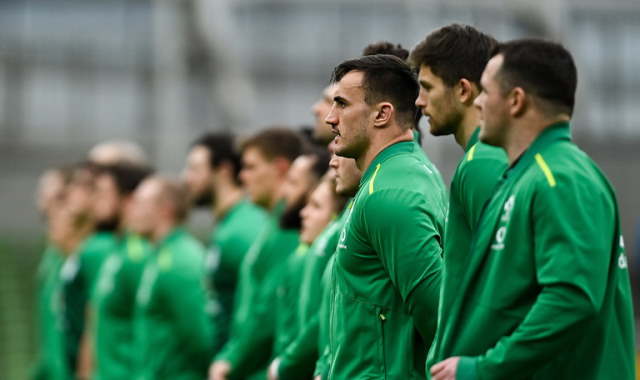 Rugby
1 month ago
By Jonathan Browne
O'Gara: New Zealand Is Perfect Place To Test Irish Outhalves
Rugby
3 months ago
By Colman Stanley
Joey Carbery Talks About Playing His "Own Game" With Ireland
Rugby
3 months ago
By Colman Stanley
Andy Farrell Was Proven Right With Joey Carbery Decision Despite French Loss
Popular on Balls
GAA
1 day ago
By PJ Browne
The Draw Has Been Made For Tailteann Cup Opening Rounds
GAA
2 days ago
By PJ Browne
Donal Óg Cusack Defends Dublin Hurlers After John Mullane Criticism
The Rewind
3 days ago
By Eoin Harrington
Watch: Brilliant Dermot Morgan Dublin Segment From 'The Travel Show' Resurfaces
Football
3 days ago
By Eoin Harrington
Alan Shearer Says Roy Keane "Ran Away" From Him After Famous Clash