14-man Munster gutted out a hard-fought interpro victory against Ulster 18-13 tonight at Thomond. Simon Zebo saw red in the fifteenth minute, and despite trailing 10-6 at halftime, Johann van Graan's men found a way to earn a much-needed victory following the disappointing loss to Connacht on New Year's Day in Galway.

All the talk in the Irish rugby circles since that poor result has focused on Munster's form, and whether employing Johann van Graan through the end of the season is a wise idea, considering he's moving to Bath next season.

The Munster coach was in spiky form before tonight's game, during his pre-game interview with Murray Kinsella. When asked about Munster's 'couple of disappointing performances the last two weekends', van Graan immediately corrected Kinsella and said Munster had only lost last weekend.

The South African also decided not to answer a question about his decision to take the position at Bath.

A tetchy interview from the departing Johann van Graan ahead of Munster's clash with Ulster. Peter Stringer and Jamie Heaslip reacted in the RTÉ studio and looked at Munster's lack of identity.

The tone of van Graan's answers was commented on both in the punditry booth and by viewers at home.

"He was a barrel of laughs, wasn't he?" Jamie Heaslip said on RTÉ.

"The Munster fans deserve a little bit more of an answer than that, if I'm honest. They deserve more. I'd be disappointed with that response. In terms of him snapping back at Murray...he's missing the big picture here, which is that the style of rugby, the South African style, that he's forcing them to play, it seems, does not fit the squad of players that he has. He's missing the point completely, I think."

The interview also left many fans at home aggrieved.

@StephenFerris6 @Murray_Kinsella someone needs to tell Van Graan that he's not talking TO the media, he's talking to Munster fans THROUGH the media. That pre-match interview with Murray was contemptuous. I remember Dan McF used to be like that, but obviously someone had a word.

As a lifelong #Munster #rugby fan not at all impressed with Johann van Graan's prematch comments tbh. Where is the passion, where is the respect for fans and players?? Disappointing. #MUNvULS

Poor [email protected] that interview from VanGraan. Rarely agree with Heaslip, but he has a point there. #MUNvULS

Interestingly, the result tonight completely undermined the media chatter that Johann van Graan had lost the Munster dressing room. Down to 14 men for 65 minutes of the match, already without Peter O'Mahony who was lost to a pregame injury and facing a decent Ulster side in inclement conditions, Munster had plenty of reasons to lie down.

Instead they found a way to win. Speaking to Kinsella after the game, van Graan made it clear he'd be at Thomond until the end of the season.

"You can see it in there tonight, it's all about heart. It's all about the club. No one is above the club. Everybody's all in for Munster. There's always end dates to contracts. Once you're part of the Munster family, you stick here until the end." 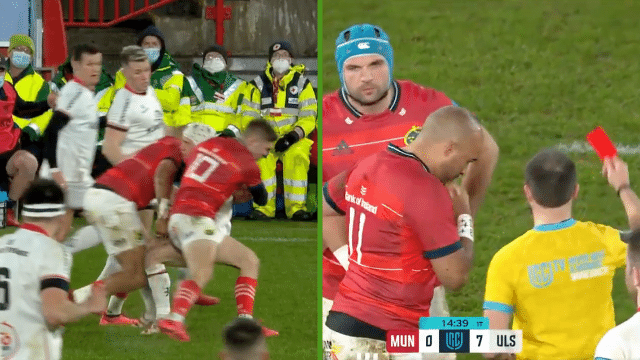 Rugby
1 month ago
By Colman Stanley
Do Munster Benefit From JVG Leaving? Who Will Take Over?
Previous Next

Rugby
1 month ago
By Colman Stanley
Could A Shock Munster Return For Declan Kidney Be A Shrewd Move?
Rugby
1 month ago
By PJ Browne
Johann Van Graan 'Hugely Excited' About Joining Bath
Rugby
1 month ago
By Colman Stanley
Do Munster Benefit From JVG Leaving? Who Will Take Over?
Popular on Balls
Basketball
21 hours ago
By Eoin Harrington
Kieran Donaghy And Tralee Warriors Claim National Basketball Cup Title In Tallaght
Football
1 day ago
By Gary Connaughton
Carragher Reveals Unhappy Instagram Message From Lionel Messi After MNF Comments
The Rewind
1 day ago
By Gary Connaughton
Quiz: From Which Irish County Did This Company/Product Originate?
GAA
5 hours ago
By PJ Browne
Tiernan McCann Decision Part Of Worrying Trend For Tyrone