John Muldoon is Connacht Rugby. The inaugural winner of the balls.ie beard bracket in 2013 is the most- capped Pro 12 player and typifies everything about the westerners.

He is one of Pat Lam's most important players, and is vital in establishing the culture in the province. It's fair to say that without Muldoon, Connacht would struggle to have the success that they have had in recent years under Pat Lam.

And yet, it could so easily have been like that. So many times in John Muldoon's life was there opportunities for him not to be in the position that the Connacht captain finds himself in.

Denis Walsh profiled the Portumna native in the Sunday Times in a highly entertaining article focusing on several amusing anecdotes that show Connacht fans how different the last twelve years could have been. In fact, eight years ago, Muldoon was almost out the door in Galway:

In late December 2008 there were two contracts on the table: one from Ulster, one from an English club. Both of them superior to the terms of his Connacht deal. Muldoon was 26 years of age, heading into his athletic prime. He spoke to his family and they agreed: he should go. Fly the nest. In his mind, he was gone.

Needless to say, Connacht coach Michael Bradley was not pleased, and tried his hardest to keep his best player:

Bradley’s feelings screamed out from a short text message: “Have a good Christmas because you’ve ruined mine.”

Muldoon waited until after Connacht's inter-pro game with Munster on December 28th to sign a contract with Ulster. But then something unusual happened. Connacht beat Munster in the Sportsground. It was the first time the team had beaten Munster in over 20 years. Naturally, the Sportsground erupted and the fans went in insane. We've seen Connacht record massive victories in Toulouse and Thomond Park since, and it's clear how much these games mean to them.

Bradley's message to Muldoon after that game was simple, “How can you leave us now?” How indeed? 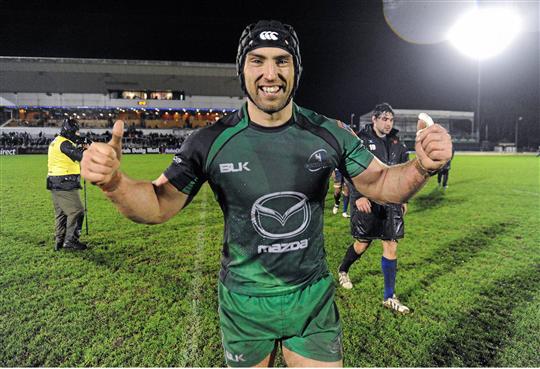 It's clear from the following eight years, that Muldoon couldn't do it and has been a part of some famous Connacht victories since. He's been their leader through their forays into the Heineken Cup. The man who brought them to victories over Leinster, Toulouse, and Bordeaux, as well as further victories over Munster.

Muldoon typifies all that is good about the team, and his links to Galway hurling tell you everything you need to know about Muldoon's demeanour. Walsh tells the humourous tale of a Sky Sports interview. As a proud Galway man, when Muldoon was asked for his sporting hero he chose someone close to home:

Sky Sports collared him for an interview once, one of those set-piece Q&As. They asked him to name his hero and he answered Joe Cooney, the famous Galway hurler. Politely, they stopped filming and asked him to name somebody that people would know. He said Muhammad Ali, but he didn’t mean it.

Connacht Rugby owe Muldoon a huge debt of gratitude. And we owe Denis Walsh one too, for some fantastic anecdotes in this article. For this and more stories, check out the full copy.

Rugby
2 months ago
By PJ Browne
'It Was So Unhealthy, I Had Screenshots Of What This Person Said On My Phone'
Previous Next

Rugby
1 week ago
By Michael McCarthy
Connacht's Greatest Day Leads An Extensive Eir Sport Gold Lineup This Week
Rugby
2 weeks ago
By Balls Team
Connacht Announce Limited Edition 'Heroes' Jersey In Aid Of Charities
Rugby
2 months ago
By PJ Browne
'It Was So Unhealthy, I Had Screenshots Of What This Person Said On My Phone'
Popular on Balls
The Rewind
7 hours ago
By Michael McCarthy
Watch: Aussie Cameraman Assaulted By US Police On Live TV, Prime Minister Demands Investigation