Ireland took a historic third win over the New Zealand All Blacks on Saturday evening, and captain Johnny Sexton said that it was only the beginning of this Irish team's journey in his post-match interview.

Sexton also reserved special praise for the impact of Ireland's bench players, who saw out the victory in style in the dying stages.

Johnny Sexton was once again in the wars on Saturday afternoon, with the All Blacks' physicality aimed in no small way towards Ireland's number 10.

He and the rest of the team put in a monumental shift, in one of the best performances the Aviva Stadium has ever seen from an Irish team, to grind out a famous 29-20 win. The XV who started the game were all immense - but the impact off the bench could not be understated, with sub Joey Carbery nailing an incredible kick from the half-way line in the dying stages to push Ireland out of reach.

Peter O'Mahony's energy and presence on the field were also welcome off the bench, and when captain Sexton spoke to RTÉ after the game and praised Carbery and Keith Earls for their impact as substitutes.

It's a special day, some special players on this team. I'm so happy for James Lowe, a lot of the criticism he got. Joey Carbery coming off the bench and kicking three great kicks under pressure, he's been out so long with injury, it's a credit to him, I'm delighted for him.

Keith off the bench, that big poacher - I said it last night, it would come down to big moments.

Ireland fans are unlikely to forget Saturday's win in a hurry, with only a third ever win over the All Blacks a cause for celebration.

The performance only added to the buoyant mood around the Aviva as darkness fell - but Sexton was adamant that more improvements are to come from Ireland.

We played for 80 minutes. We left a few tries out there, a few decisions we'll have to look at. But we dominated large parts of the first half and went in 10-5 down, it's incredible. They're so clinical and they're a top quality team.

I'm so proud of the team, the way they regrouped at half-time, took the messages onboard, and we went out in the second-half and scored some great tries.

Couple of tries chalked off, a couple of penalties for them right on their line - they could easily have come our way. And then, suddenly, we do go in playing against 13 or with a lead. I'm just so proud of the lads and the way that they dug in to grind out a win.

Our style of play is not all that new - it's just starting to click a little bit. We've got to keep our feet on the ground, we're only at the start of our journey and we need to keep improving.

We can't peak now like we have previously and then come up short. We need to keep building and I think there's plenty more in this team.

What a day in Dublin, and there's more to come from Johnny Sexton and this Ireland team. 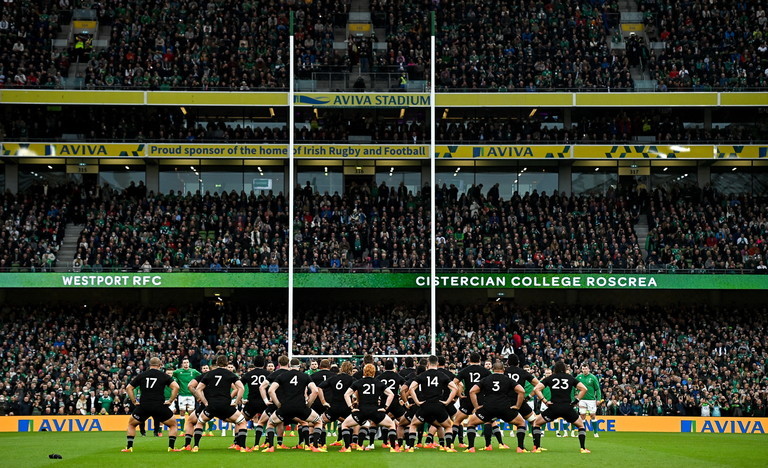 Rugby
1 week ago
By Michael McCarthy
Ireland's Best Novembers And How They Fared In The Following Six Nations
Rugby
1 week ago
By Colman Stanley
All Blacks Hooker Dane Cole Explains Why They Couldn't Keep Pace With Ireland
Rugby
2 weeks ago
By Brett Igoe
Analysis: Four Reasons Ireland Look Like One Of The Best Sides In World Rugby Right Now
Previous Next

Rugby
1 week ago
By Michael McCarthy
Ireland's Best Novembers And How They Fared In The Following Six Nations
Rugby
1 week ago
By Colman Stanley
All Blacks Hooker Dane Cole Explains Why They Couldn't Keep Pace With Ireland
Rugby
2 weeks ago
By Brett Igoe
Analysis: Four Reasons Ireland Look Like One Of The Best Sides In World Rugby Right Now
Popular on Balls
Football
12 hours ago
By Jonathan Byrne
Jack Byrne Reveals Man City Player Who Was Toughest To Train Against
Football
23 hours ago
By PJ Browne
Saoirse Noonan Celebration Was Nod To Chiedozie Ogbene
Football
16 hours ago
By Eoin Harrington
Michael Carrick Explains How Violence In Rome Inspired Famous 7-1 Win
Snooker
1 day ago
By Gary Connaughton
Ronnie O'Sullivan Labels Young Star As Snooker's Answer To Roger Federer