Ireland head to Cardiff this weekend as favourites to beat Wales. That is despite not having beaten Wales at the Principality Stadium in the Six Nations since 2013.

"The last time we won, we ended up having an injury crisis and coming second last - it wasn't a great campaign," said Ireland captain Johnny Sexton on Wednesday.

"Wales have made it clear that Ireland are up there on the list of most disliked teams.

"The last time we were in Cardiff (2019) we got hockeyed. It was a particularly dark day. They ended up winning the Grand Slam that day so that was only a couple of years ago.

"That’s the same team with the majority of the same players so we know that any team can have a bad campaign at any stage or a bad game and ultimately you can turn it around pretty quick.

"When you look at the players they have through their ranks, look at Alun Wyn (Jones) up front, you look at their half-backs, with (Dan) Biggar, the amount of caps that he’s got, Gareth Davies, Jon Davies, Leigh Halfpenny, they are littered with caps throughout.

"They have so much experience and they’ve had highs and lows like any international player has and I’m sure they’ll be in good stead come Sunday as well, so it’s all systems go now."

The 35-year-old trained in full on Wednesday. That's good news given he was withdrawn during the second half of Leinster's recent victory over Munster.

"Every team is sat in their different training centres setting targets to win the Six Nations," said Sexton.

"You are not coming in here going, 'God, I hope we finish third or second’.

"We’re here to try and win, that’s the name of the game in professional sport.

"I think it goes without saying but how do we do that?

"We do that by performing well and by trying to get better from our last outing. We did some really good things in our last game against Scotland.

"For the foreseeable future that’s all we are going to be playing against so we want to be up there with the best. That’s France and England at the moment. You look at the Six Nations table and anyone can win it, I think."

Peter O'Mahony: 'I've Been Beyond Impressed With Him, Particularly His Footballing Skills' 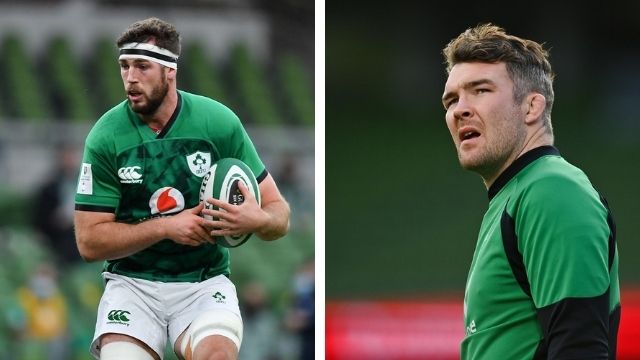