Johnny Sexton Made Winning Kick Despite 'Cramping' Up

Ireland had built up a 14-point lead in the second half but Scotland - helped by some poor Irish defending - reeled them back in to draw level at 24 points each.

Up stepped substitute Ryan Baird to block down a Scotland clearance and Iain Henderson to force the penalty.

"It was brilliant by Ryan Baird, wasn't it, to get the charge down," said Sexton after the game.

"He’s so explosive for the first couple of steps and then to make the tackle that he does which allows Iain Henderson [to poach], he was outstanding as well.

"Obviously, then you have to kick it. I kicked pretty well all game – it wasn’t my best of the day. My best of the day probably hit the post but it was enough. I was trying to keep it a little bit lower. It was quite blustery in the stadium.

"It was a good enough strike to get over and thankfully we get the four points which is very important and we’re up to second now. [It's] a big end to the tournament next week."

Post-match, Ireland head coach Andy Farrell revealed that Sexton made the kick despite suffering from cramp.

"To be fair to Johnny, he was cramping in that last five or 10 minutes as well, to step up to the plate and kick a goal in that sort of state makes the three points even better," said Farrell.

Though he was happy with the win, Sexton was not happy regarding Ireland's near collapse. The Ireland captain also felt his side could have done much more with the turnover ball which they forced on Scotland's lineout throw.

"With 10 minutes to go, I didn’t see the game unfolding like that but international rugby throws things at you that you don’t expect sometimes," said Sexton.

"I thought we dominated large parts of the game but I suppose when they had their small purple patches they scored.

"When we’re 14 points up and we concede that try it just changes the game again and we need to be better there.

"If you have a 14-point lead in international rugby, the next moment is the most important one. You can put a statement down. Top teams, I think, they take the kick-off and clear their lines and then they put pressure on again.

"We’re just short of that at the moment."

Player Ratings: Ireland Battle To Victory Against Scotland In Murrayfield 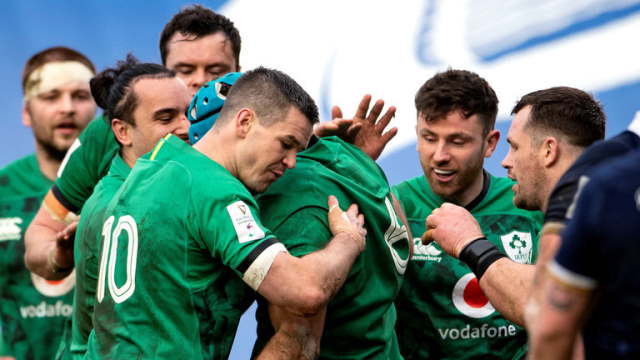