Well, that was a bit closer than it should have been.

Ireland have secured their second victory of the 2021 Six Nations, defeating Scotland 27-24 at Murrayfield.

It was a game that Ireland really should have wrapped up much earlier on, but it took a late penalty from Johnny Sexton to make sure of the win.

Speaking after the game, the Ireland captain was certainly relieved to secure the win. However, he did not seem happy that the team had put themselves into that position after holding such a commanding lead. He also indicated that he had plenty left in the tank after recently signing a new one-year deal with the IRFU.

"Just stick to the process. It was tough enough in here today with the swirling wind.

"Just try pick your line and bang it at the left post.

"I got a little bit lucky, wasn't my best strike of the day."

Johnny Sexton on that match-winning kick at Murrayfield. 🎯#SCOvIRE pic.twitter.com/UZKl9ycS26

It's the same old story sometimes with us. We're just letting in soft tries, tries that just aren't acceptable at international level.

It's frustrating because I felt we dominated large parts of that game. We're 14 points up and suddenly we're drawing with a few minutes to go.

But it was great character to stay in the moment and bounce back. They're the things we've been working on.

The other part we've been working on is keeping our concentration and not giving away soft tries like we did...

Every time you put on the Ireland jersey you want to make everyone proud at home, you want to make your teammates and family proud. No matter what is on the line, even though we can't win this championship anymore, there is a lot at stake.

We're playing for our jerseys, trying to get on Lions tours, there's so much at stake. If we can finish second after the start we had in this competition it won't be a bad result...

What are my aspirations? To keep winning with Ireland and Leinster. I've got another year and I want to make the most out of this and next year, then see how I feel this time next year. Just take it a season at a time.

He will be sticking around for a while yet.

Ireland now head into their final game of the campaign with some sort of momentum, with England set to arrive in Dublin next weekend.

Andy Farrell will be hoping to finish a very difficult few weeks on a high note.

SEE ALSO: How Good Is It To Have Tadhg Furlong Back In An Ireland Jersey? 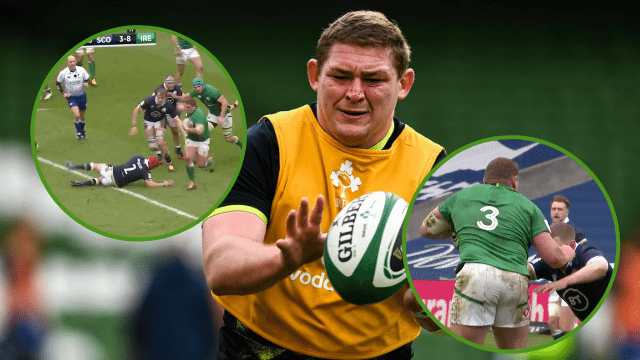 Rugby
5 months ago
By Michael McCarthy
Six Nations To Remain On Free To Air Television After Surprise Deal
Rugby
7 months ago
By Gary Connaughton
Ellis Genge Has Somehow Escaped Punishment For Sickening Sexton Elbows
Rugby
7 months ago
By Balls Team
Ireland Dressing Room Sang 'The Best' For Emotional CJ Stander
Popular on Balls
Football
10 hours ago
By Eoin Harrington
John O'Shea Explains How He Ended Up In Goal For Manchester United In 2007
GAA
17 hours ago
By PJ Browne
Three Live Club Football And Hurling Games On TV This Weekend
GAA
12 hours ago
By PJ Browne
Incredible Penalty Halts Premature Celebrations In Galway
GAA
13 hours ago
By Maurice Brosnan
'Bad Coaching. I Think That Is A Big Problem In The GAA'