When Donnacha Ryan told BT Sport after Sunday's Champions Cup semi-final against Munster that he was "bitterly disappointed" for his former teammates, the words were heartfelt. Ryan doesn't strike you as the type of person to pose for the cameras; one who will throw out a platitude in the belief it will play well.

Immediately after the game, he was pictured with an arm around Keith Earls, consoling his friend in the aftermath of yet another heartbreaking European semi-final defeat. The two remain close friends even with Ryan now an opponent rather than a teammate.

"He’s a Munster man, you could see he was nearly apologising, it was like he was hurt," Earls told Balls on Monday following his announcement as a nominee for the 2018 Zurich Irish Players’ Player of the Year Award.

"He’s a man on his own mission and we had good chats in the dressing room afterwards and I’m delighted for him as an individual but it’s a tough one for us to swallow."

Ryan had a major influence on Sunday's game. The 34-year-old helped stall the Munster attack with 19 tackles, missing none. 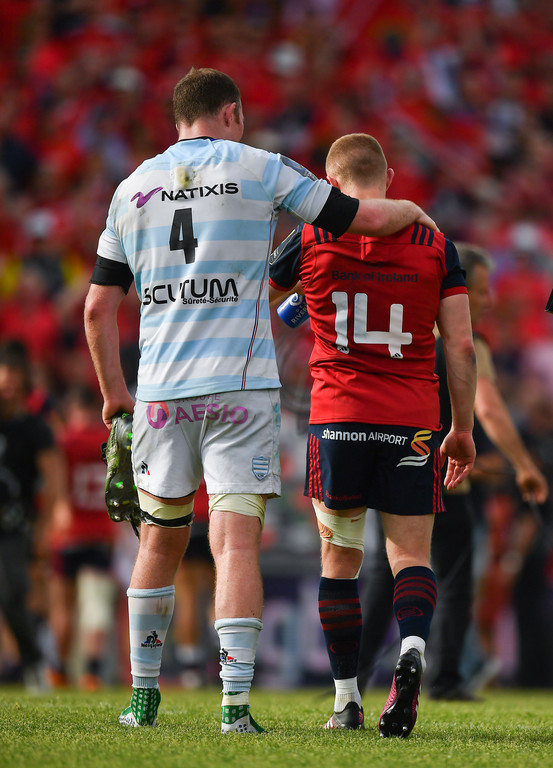 "He was massive," said a sombre Earls.

Obviously, he knows us inside out and he knows what gets us going, possibly our weaknesses. Especially for line-out, himself and Billy had massive mind-games leading up to it.

Donnacha was massive when he was with us, leading our line-out. I think if Racing didn't have Donnacha Ryan in their line-out, CJ Stander scores in the first-half with that move through the middle of the line-out. His work-rate, his knowledge and the little cues he'd pick up on, he got around and hit CJ.

Racing are team well-known to Munster - they faced each other in two close pool stage encounters earlier in season's tournament. Munster took first blood at Thomond Park and then ran them close in Paris, only losing to two late penalties.

Earls says that they went into yesterday's match with a similar gameplan to previous bouts: one to take advantage of the likelihood that Racing would run out of gas over the 12 rounds.

"We knew they lacked a bit of fitness and that we'd catch them in the end. It did show, but we gave them too much of a lead.

"We're used to playing them, and the gameplan of tiring them out and catching them at the end worked, but we gave them too good of a start."

Earls believes it was Ryan's influence which got his new team over the line and into the final.

"They probably lack a small bit [of fitness]... not all their [French] teams, but it's something we identified with Racing, we had beaten them that way before.

Rugby Players Ireland and Zurich have today teamed up with Irish international rugby player Keith Earls to announce the nominees for the 2018 Zurich Players’ Player of the Year Award. The Zurich Irish Rugby Players Awards, one of the biggest nights in Irish sport, will take place on Wednesday, 16th May, at the Clayton Hotel in Ballsbridge.