Pressure was building over Thomond. Munster came into tonight's Pro14 derby on the back off losses against Ulster and Castres. However, they closed out 2018 on a significant high with the help of their exceptional winger Keith Earls. It ended 26-17. 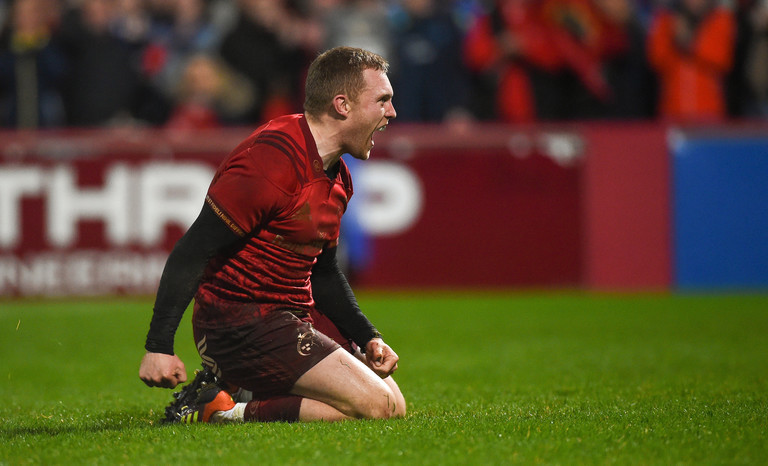 Earls' intelligent intercept will rightly earn praise for ensuring the victory but his contribution should not be reserved to offensive brilliance. On both sides of the ball, the Limerick man was an outstanding presence.

There was a moment midway through the second half when a Leinster advantage saw Johnny Sexton launch the ball high and it broke favourably for fleet-footed Jordan Larmour. It bore an eery resemblance to that famous moment he announced himself on the national scene with a breakaway try versus Munster.

He took off against a broken defensive line but found Earls in his way. The Munster man not only made big first-up contact but got a good leg-drive going and pushed the 21-year-old back 10 yards.

Extraordinarily, only one Munster back finished the game with no missed tackle. That was Earls, who was also the third highest tackler amongst that group. He also finished with the most metres made on the pitch.

Superb from Keith Earls right as Leinster were gaining momentum. Great kick-chase from the Limerick man brings Munster well inside the Leinster half. Remains 16-10 after 52 mins #LLSport #MUNvLEI

Leinster were in the hunt for another comeback win, a week after they broke Western hearts with a last-gasp victory over Connacht in the RDS. With Munster once again under the cosh, he produced a sensational read and break to turn the game on its head and push Munster into a comfortable lead.

That should be that at Thomond as Keith Earls intercepts and races clear to score his 51st Munster try.

Much has been made of Munster's lack of offensive presence, but a large portion of that is down to the loss of key figures. The difference was obvious when Chris Farrell made his long-awaited return against Edinburgh last month. On the same night, Keith Earls scored a hat-trick.

The 31-year-old has grown to become a commander in Johann van Graan's side and demonstrates the importance key players have to their success. Tonight Munster mustered a single-minded showing that made Leinster look ordinary and Keith Earls was at the heart of it.

Rugby
1 month ago
By Gary Connaughton
Ian Keatley Joins PRO14 Side On Deal Until End Of The Season
Rugby
2 months ago
By Conor McKenna
Pro14 Rugby Announce Launch Of Rainbow Cup For Spring 2021
Rugby
5 months ago
By Paul Moore
WATCH: Devin Toner Stands Protectively Over An Injured Andrew Conway As Play Continues
Popular on Balls
Football
10 hours ago
By Fiachra Gallagher
Leeds United in Ireland: A Decades-Long Love Affair