'The Article Kick Started A Lot More Support For Me. I Got An Awful Lot Of Text Messages'

Who doesn't want to wake up every morning and have a job that you love doing thoroughly?

Isn't that everyone's dream? To wake up every morning excited about the day that lies ahead? It's long overdue, but Kelvin Brown will finally get that chance.

The Ireland U-20 World Cup finalist has had it the hard way. But we knew that. Brown has had to work hard to get to where he is, and while it's late in the season to be getting a contract - he will sign a one-year deal with French PRO D2 club Aurillac next week, with a further option to extend it by two years.

It marks a happy ending to a summer that had it's fair share of ups and downs. From missing out on a contract with Munster, to helping Ireland U-20s to a historic World Cup final, and missing out on two further contracts - most clubs should have had their squads set by now.

Which is why Kelvin had understandably given up when one final chance came calling.

It was a bit surreal when I first heard it. I had started giving up on the thought of getting a contract. I was putting everything into Shannon and leaving my focus there for the year, so it kind of came as a bit of a shock.

How did it happen? We told you the story back in July. After the calls went cold following his star turn in the World Cup, Brown spoke to Balls.ie. He was someone we believed in, the rare player who could consistently make an impact coming off the bench with his power-running and deceptively good ball skills.

The article helped reignite some interest in Brown. He found the support overwhelming, but just kept doing what he always does - he put his head down and concentrated on what he needed to do. He received interest from readers as far away as South Africa looking to see if they could help him:

The article kick started a lot more support for me. I got an awful lot of text messages, and an awful lot of phone calls, from friends and family but, from a lot of supporters out there too. Guys not even in the country, saying that they had contact in clubs and they thought I was deserving of an opportunity, and did they want them to help me? Myself and my uncle Pat did an awful lot of work. We sent around an awful lot of clips, and we got onto a lot of people.

Everything seemed positive. There were responses. They were better than before, but still unfortunately familiar:

We got some replies that were like 'Look, it's just a bit late. But if you can put the head down for the year, we can have a look at you at Christmas.'

The article was published on July 26th, seven weeks ago. After four weeks, Kelvin was still with Shannon, getting ready for the upcoming season in the UBL.

Then his phone buzzed.

I got a text off Jeremy Davidson about three weeks ago, saying 'would I be interested in coming and joining them over there?' God I said, 'Of course I would, it would be a great opportunity at a great club.'

Former Aurillac scrumhalf David Connellan saw the article and forwarded it to Jeremy Davidson who had watched Brown in the World Cup and was impressed. He thought Brown was good enough to have a club already, so he got in touch with that text. 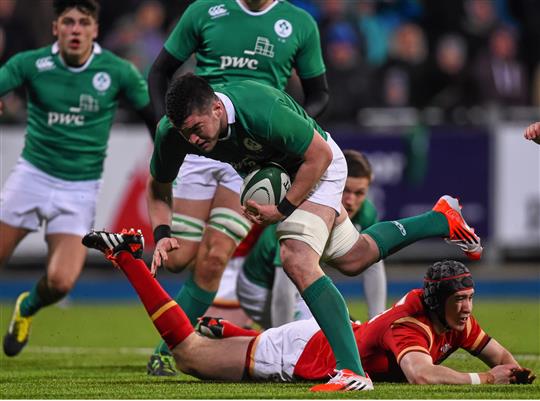 Then, more silence for about ten days.

I didn't hear anything for a while. Then he got back to be about a week and a half ago and said, 'there's a contract there if you'd like to take it.' It took them a while to write it up, and to finalise different pieces, but it finally came through Monday morning. It was a no brainer really, quite an easy decision.

With the PRO D2 season already started, Ulsterman Jeremy Davidson wants to see his new back-row as soon as possible. Brown is going over to an ambitious club in France's second tier that was just one game away from joining the elite of the Top 14. A five-point defeat to Bayonne in the playoff final cost them promotion.

Two games into the new season, Aurillac are back near the top in second place after hammering follow promotional rivals Perpignan. Brown will go straight into the senior squad with former Ulster winger Conor Gaston:

He [Jeremy Davidson] told me that I'm going to be with the seniors full time. But he's going to want to see me play a game or two. So I'll be playing a game or two for the first few weeks with the Espoirs, which is the U-23 team. So hopefully I'll be able to show him what I've got while I train with the seniors, and then hopefully play a few PRO D2 games.

From the moment he gets to France there will stuff to catch up on -  attempting to remember his Leaving Cert French, as well as living on the team's campus while an apartment is found for him with another English speaking player.

While Brown the rugby player worked his ass off to get here, and thoroughly deserves this chance - Kelvin the person is aware of all the help he has been fortunate to receive.

I owe a lot of thanks to David Connellan, and to his uncle Pat and also my family and friends. To Mike Prendergast, who kept helping me out in trying to find a club even after the move to Grenoble fell through. And especially Shannon over the last few weeks. Since I've been a kid I suppose, they started me down the road, and given me the opportunity. I hope to join them at the end of my career, and maybe bring a trophy back to them and give back you know.

For Kelvin Brown now, he doesn't have to dream anymore. He can wake up every morning with a smile on his face, knowing that he gets to fulfil his potential and play rugby as a job.

It's a dream come true, it's very surreal.

PRO D2 games are broadcast live on French Eurosport, which can be found in Ireland via a subscription.

See Also: Another Talented Ireland U20 World Cup Finalist Doesn't Get A Contract, Highlighting The Difficulty Of Making It To The Pros

Rugby
1 month ago
By PJ Browne
Devin Toner Had Other Options, But Chose To Call Time On Rugby Career
Rugby
1 month ago
By PJ Browne
The Irish Rugby Early Retirement XV
Rugby
2 months ago
By PJ Browne
Ireland's 2016 U20 World Championship Finalists: Where Are They Now?
Popular on Balls
Football
4 hours ago
By Eoin Harrington
Juan Mata Questions Manchester United Management After Dire Season
Golf
2 days ago
By Gary Connaughton
Padraig Harrington Glad He Didn't Have To 'Make A Decision' On Saudi Golf League
Football
1 day ago
By Gary Connaughton
The Frank Lampard Love-In After Everton's Survival Was Downright Bizarre
GAA
2 days ago
By PJ Browne
'It Came At An Awkward Time. I Didn't Think It Would Be So Bad'