It seems the James Lowe – Chris Ashton beef has been put to bed after the two met in the Leinster vs Leicester Champions Cup quarter-final, with Chris Ashton going up to Lowe after the game and apologising for comments he made while commenting on an Ireland vs England game from 2020.

During an Autumn Nations Cup match in Twickenham, English winger Jonny May scored a spectacular solo try, which he began in his own 22. While speaking on the BBC Sport Rugby Union Daily Podcast, Ashton criticised Lowe’s lack of pace in getting back to cover.

“Where was James Lowe? He’s dragging a dresser back there. He’s too big. He’s dragging a tractor, mate, turning. I watched him during the game. He is too big, too heavy, too slow.”

In Ashton’s defence he is not entirely wrong, as Lowe is clearly miles behind the play, which is highlighted further by the sight of Peter O’Mahony breaking his back in a fruitless attempt to stop May’s score.

There was anticipation of a Lowe revenge mission when Leinster faced Leicester on Saturday, but no 1-on-1 situations developed, and instead, as Lowe explains, they settled their differences post-match.

“He just apologised obviously. He said he was just caught in the moment and he obviously didn’t mean it. He said that he enjoyed the way I played, he loved how much I’ve grown as a player, and that was it.

“And I said, ‘Yup, that’s alright.’ But at the end of the day, he made his bed and he has got to sleep in it. But fair play, I understand he may have said some things he may not have meant in the heat of the moment. When you’re on live TV that’s what happened. That’s what you say.”

Lowe famously called out critics of his defence following Ireland’s phenomenal win over the All Blacks last November, and if a small bit of criticism does add fuel to Lowe’s fire and drives him to greater heights, then perhaps it has its merits.

See Also: Leinster Do Their Talking On The Pitch As They March Into The Semi-Finals 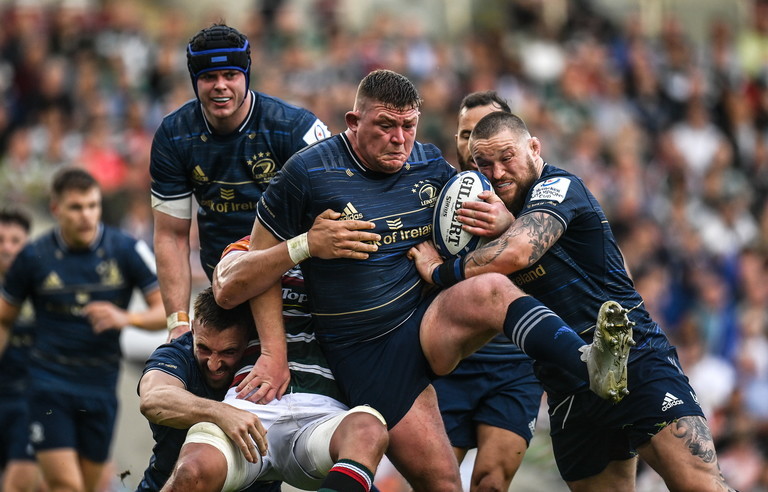 Rugby
1 day ago
By Gary Connaughton
Ronan O'Gara As Worried About Top 14 Clash As He Is About Champions Cup Final
Rugby
3 days ago
By Colman Stanley
'If Their 2nd Team Was In The URC They’d Be Top 6': Pundits Heap Praise On Leinster
Rugby
4 days ago
By Colman Stanley
Leinster Players Dominate European Player Of The Year Shortlist
Popular on Balls
Football
8 hours ago
By Eoin Harrington
Juan Mata Questions Manchester United Management After Dire Season
Golf
2 days ago
By Gary Connaughton
Padraig Harrington Glad He Didn't Have To 'Make A Decision' On Saudi Golf League
Football
1 day ago
By Gary Connaughton
The Frank Lampard Love-In After Everton's Survival Was Downright Bizarre
GAA
2 days ago
By PJ Browne
'It Came At An Awkward Time. I Didn't Think It Would Be So Bad'