The Leinster Player Ratings From A Monstrous Come Back Against Exeter

Exeter Chiefs came to the Aviva Stadium today knowing they needed a win in order to hold onto any hopes of progressing in European Rugby. Rob Baxter's men resorted to what they are good at; tight driven ball and rush defence.

Exeter were totally controlled in defence, generally committing no one to the breakdown. They relied on the likes of Matt Kvesic to selectively target rucks and utilise the 'jackal.' Yet Leinster were dogged and overcame huge disadvantages including an early Sexton injury, two first-half sin bins and a 3-17 deficit.

It was an error-ridden performance, but a spirited one. To overcome the initial setbacks and secure a win is as more a testament to the squad's character than the team's ability. This is a seriously competitive side. Even when things aren't going well, they grit it out. 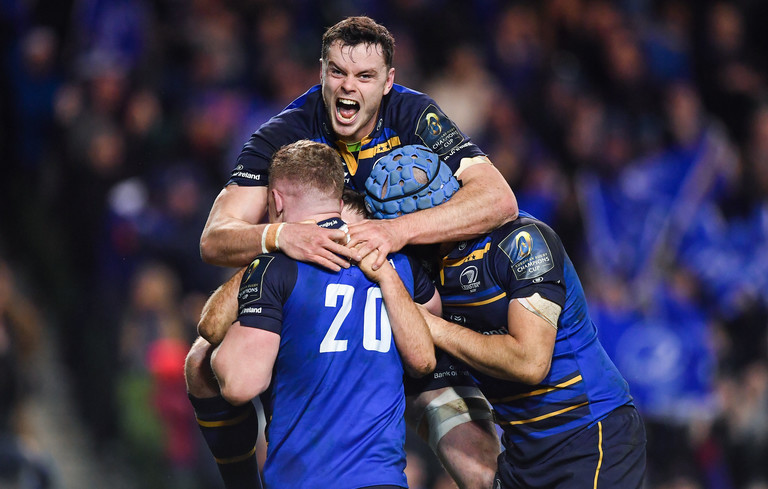 At times the backfield looked loose in covering across, perhaps due to poor communication, stressful circumstances, a man down or a combination of all three. In the second half, he regained composure and fought like a demon to ensure a potential Exeter try was called back for a player in touch.

McFadden is always fully committed and as a result a furious tackler. He lost out some aerial battles early on, but kept plugging away and was on the end of a well-worked move that saw Leinster gain crucial field position.

An incredible five defenders beaten. In a game were space was at a premium, constantly looked the most likely to unlock Exeter's defence.

Begining to develop quite the relationship with Ringrose. Whatever about set move link-ups, Henshaw's teamwork with Ringrose in defence was brilliant, particularly his covering for some missed tackles.

Took on the kicking responsibilities when Sexton went off injured and was flawless. A calm influence when the pressure came on as a measured captain should be. Hard to believe he is 35 with the level of running he does.

Taken off after two minutes for a HIA and did not return.

Superb attitude from the young scrum-half. His performance was far from perfect, but recovered from a loose clearance kick and poor rucking to run a terrific support line for his try. Will need to improve his exit strategy as box-kick was wild. Taken off after 73 minutes.

A really silly yellow card for a forearm clear-out, could easily have been a red. Came back on adamant he'd make up for it and contributed a decent eight tackles and two defenders beaten. Will not be happy with overall scrum effort.

Made a superb break at the end of the second-half but needs to contribute more to the break-down. Line-out was off, partly due to Leinster's reliance on Furlong as a lifter but also the throw wasn't sharp. Exeter's Luke Anthony Cowan-Dickie's two steals and competitiveness at the breakdown set the template of a rounded hooker performance, something Cronin is no doubt capable of. Taken off after 55 minutes.

Leinster cannot afford to be as obvious in line-out calls as they were for the first hour in this game. An obvious jumper can be tolerated at times when he is as tall as Toner is, but an obvious lifter with him makes it very predictable. The least tackles out of the pack with just 5, while missing one.

Both of Leinster's first-half sin-bins were unnecessary infringements. Fardy pulled down a maul when the try was a formality anyway. Responded with his usual industrial performance, 11 tackles and none missed.

Has expanded his game as a flanker in technical aspects. Bolsters defence and monitored a competitive Exeter back-row expertly.

His three missed tackles will stand out but must be taken in context of his 16 total, the most of any Leinster player. A traditional flanker who slotted in seamlessly for Ruddock. Leinster's back-row options are a joy to behold.

The in-form number 8 in Ireland right now. Immense work-rate both sides of the ball.

Dropped into the deep end unexpectedly and then withdrawn just as fast for a HIA. Returned after assessment and managed well. 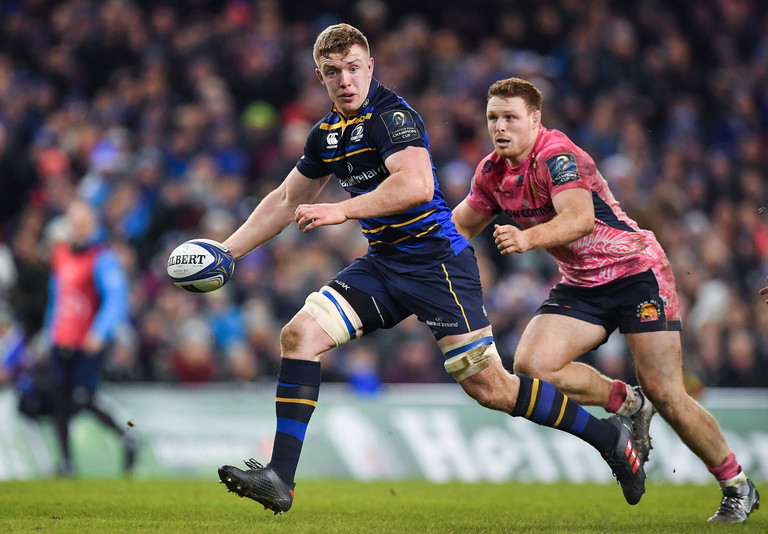 James Tracey, Jack McGrath, Dan Leavy and James Treacy were all introduced early in the second half. Leavy's fresh legs and hard running created McGrath's try and overall he was monumental. Cullen's use of the bench was intelligent throughout and he made a brave call to introduce a wholesale change so early, but it was crucial to Leinster's success. The bench swung this game.

This was the biggest declaration yet by Leinster that they are serious competitors for this trophy. Heart in abundance.

Rugby
1 day ago
By Colman Stanley
Jimmy O'Brien Announced His Arrival On The Biggest Stage This Afternoon
Rugby
1 day ago
By Gary Connaughton
People Couldn't Get Over The Officiating In Castres' Loss To Harlequins
Rugby
1 week ago
By Colman Stanley
Bundee Aki Apologises For Confronting Ref After Connacht Concede Late Try
Popular on Balls
The Rewind
1 day ago
By Gary Connaughton
Quiz: From Which Irish County Did This Company/Product Originate?
GAA
8 hours ago
By PJ Browne
Insane Drama As Late TJ Reid Goal Sends Ballyhale Into All-Ireland Final
The Rewind
2 days ago
By Jonathan Byrne
The Story Of Meat Loaf's Tour In Ireland During The Troubles Is Remarkable
Football
6 hours ago
By Jonathan Byrne
Roy Keane Enjoyed Dig At Harry Kane For Referee Bias Being 'England Captain'