Cruising not contesting. It was a quietly efficient result never really in question or doubt. Wasps wilted after 20 minutes and Leinster looked destined for a home quarter-final by then. The expected duly came, a 37-19 victory away in Coventry.

The fact that a bonus-point away win in England is now expected is another conversation. For the second year in a row, Saracens are the sole Premiership representative in the quarter-finals. The standard weakened as the contest wore on. But for the opening hour, their attacks were frustrated by loose passing and repeated handling errors.

In grave contrast, Leinster loomed large at the break-down and made bits of their rivals in the maul. A performance of precession and proficiency that has become standard. Tries for Gary Ringrose, two for Sean Cronin and one for Noel Reid assured all five points.

It was a game that underpinned what this tournament has been about for the last two years. The majority of English sides continue to flounder, while Leinster power on and prosper. 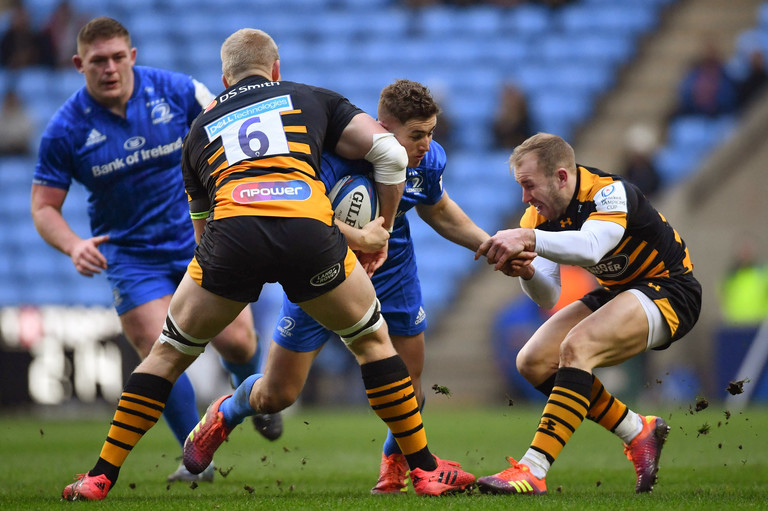 Beginning to look that bit more comfortable at full-back. Stepped into the line well and even forced a turnover in defence. Never exposed in the backfield or under the high ball.

A sloppy right-handed pass almost squandered Leinster's first try opportunity but Dave Kearney recovered well and Ringrose got over a few phases later. This was a pack-led performance so the Kildare man never really got an opportunity to cut loose. Poor error to allow Wasps land a late blow through Marcus Watson.

Superb step off his right and dart to the line for the game's opening try. One great offload going forward. Always seems to make good decisions in defence. 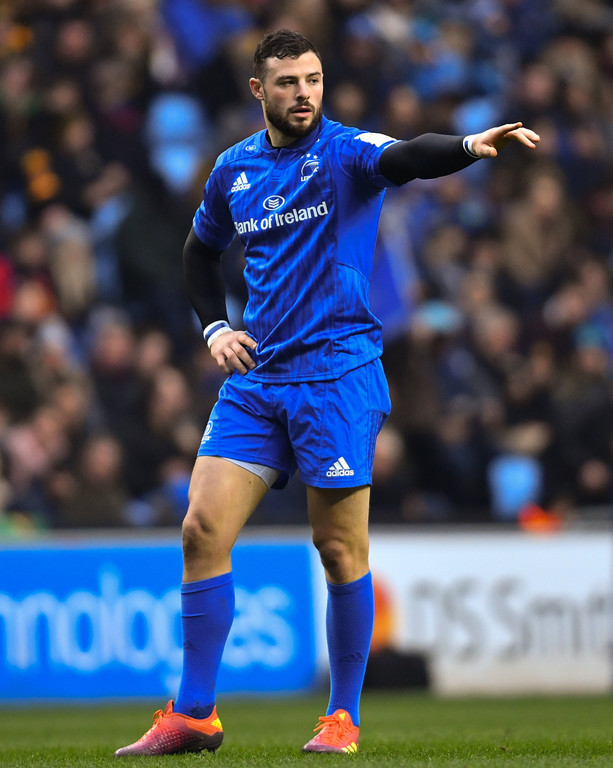 A player Leo Cullen will be delighted to have back. A relentless crash-ball option off line-outs and rucks. Ran a lovely offload move with Sean O'Brien off a scrum that was similar to that famous New Zealand try with Jamie Heaslip. Replaced by Rory O'Loughin on the hour mark.

Strong with his kick-return, never seems willing to just accept possession and demands further yards where he can.

A big week for the former St Michael's man who was omitted from Joe Schmidt's Six Nations squad last Thursday. Kicked well, an impressive nine tackles without missing one. Took a big knock and was replaced by Noel Reid after 65 minutes.

An inaccurate exit box-kick just before half-time the only real error. Kept the English pillars honest as he constantly threatened to break from the back of a ruck and eventually forced a penalty. Dictated the pace perfectly in the second half. Taken off with five minutes remaining to allow Hugh O’Sullivan make his European debut. Man of the Match.

Ten carries and six tackles for a decent showing. Last week Cian Healy went through a trojan amount of work, it's a fantastic option to have a test standard replacement ready to start a week later. Healy was introduced five minutes into the second-half.

His support lines and clear-outs at the breakdown gave the away side consistent quick ball. Incredibly, his two tries today make him tied as the top try scorer in the tournament so far. 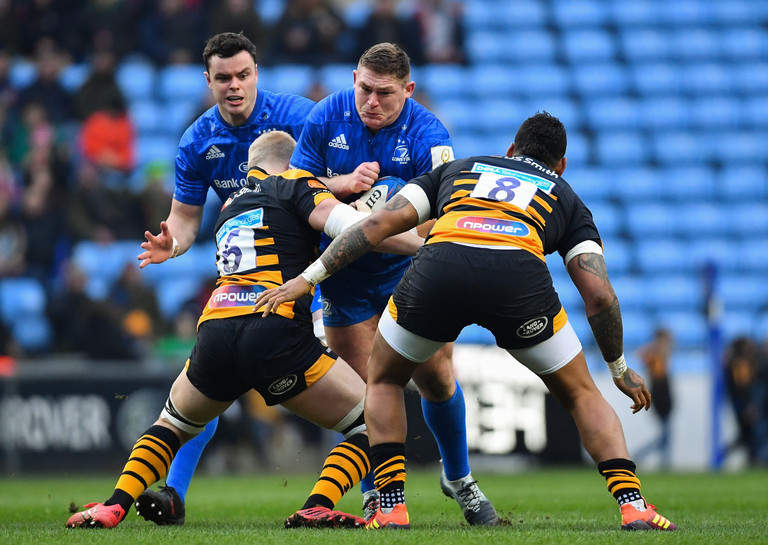 An underappreciated aspect of this Leinster outfit is their set-piece accuracy. 100% in the line-out and scrum today. Furlong is a big part of that. No real joy with his ball-carrying but that is not to take from a proficient performance.

Continues to evolve at 32-years-old. From a set-piece specialist to a breakdown workhorse, his line-out prowess has progressed behind merely jumping to defensive displays like counter-mauling and pressurising box-kicks. Got caught on the outside by Michele Campagnaro but Leinster's scramble defence avoided a try. A second missed tackle in the second-half, taken off just after 5o minutes for Scott Fardy. 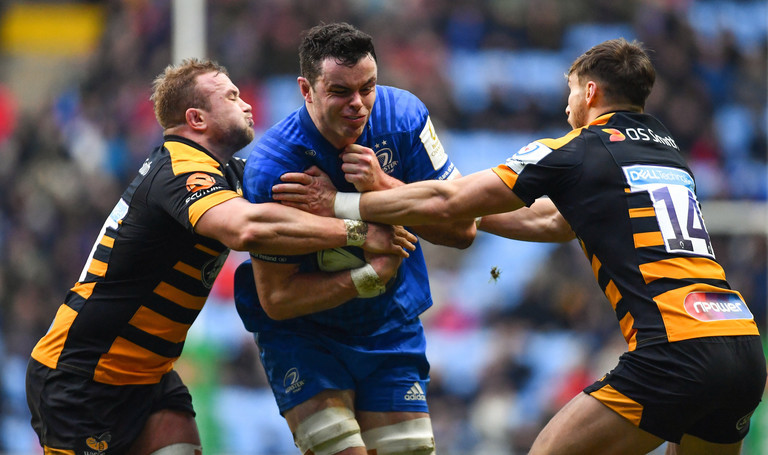 A massive jump to take the line-out which Leinster scored their second try off. Clever rip just before half-time to thwart a late Wasps attack. Clearly in peak physical condition, continued to show as strongly in the last minute as he did in the first.

There was a clever move early in the first half when the openside flanker stood in as scrum-half off a maul, only to jump into the line last minute and lift the jumper. A play that makes it near impossible to compete against in the air. A remarkable tackle count as usual, topping the stats with 19 tackles. Nine carries for 30 metres. 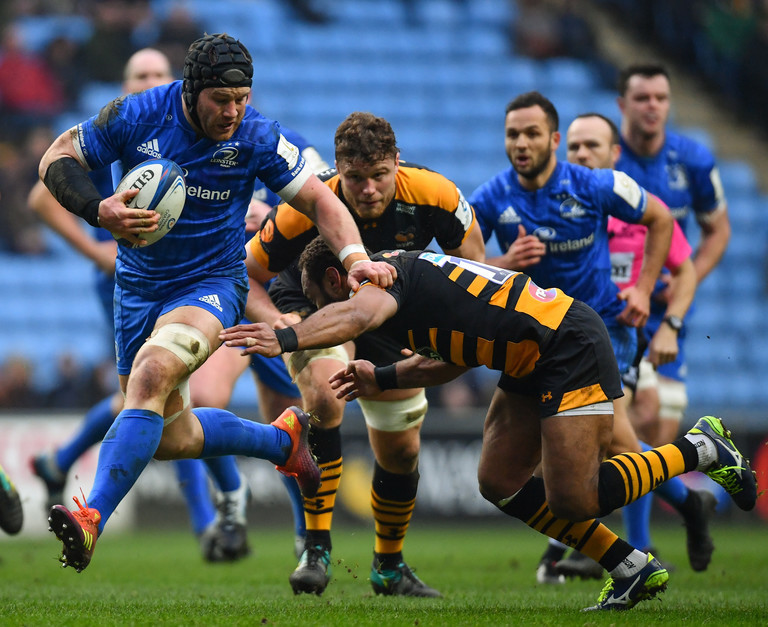 Came into the starting team on short notice after Jack Conan withdrew due to a shoulder issue. A persistent source of yards with his typical carrying. Big presence in the breakdown. Looked to be motoring nicely ahead of the Six Nations. Taken off for Max Deegan early in the second half.

Cian Healy missed a straight-up tackle in the second half as Wasps finally opened their account. Scott Fardy and Andrew Porter were introduced early in the second half, Porter was exposed badly as a pillar to allow Dan Robson run in a simple try. Rory O'Loughin showed some good physically going forward while Noel Reid's showed some nice passing ability off left and right to allow Ringrose and Fardy punch holes in Wasps drift defence. Reid completed a stunning Leinster try with O'Loughin, Healy and Max Deegan all involved.

Leinster's Champions Cup defence rumbles on. The Aviva Stadium and a date with Ulster await this March.