Following last weekend's comprehensive semi-final dispatching of Toulouse at the Aviva, Leinster will be hoping to make history as the first side to retain their European champions crown for the second occasion when they collide with the might of Saracens at St James's Park on May 11th.

It's been the final European rugby has waited on all season and the two big guns of the club game in the Northern hemisphere will go toe to toe next month in one of the most hotly anticipated Champions Cup finals to date.

No surprise then, that when the EPCR announced their final five for European Player of the Year this afternoon, that the spots were carved up entirely between the two finalists.

Hoping to emulate Sean O'Brien (2011) and Rob Kearney (2012) in collecting the Champions Cup - Player of the Year double for the Irish side will be Sean Cronin, Tadhg Furlong and Garry Ringrose.

However, the trio will face stern competition for the individual honour from Sarries duo Alex Goode and Mako Vunipola. 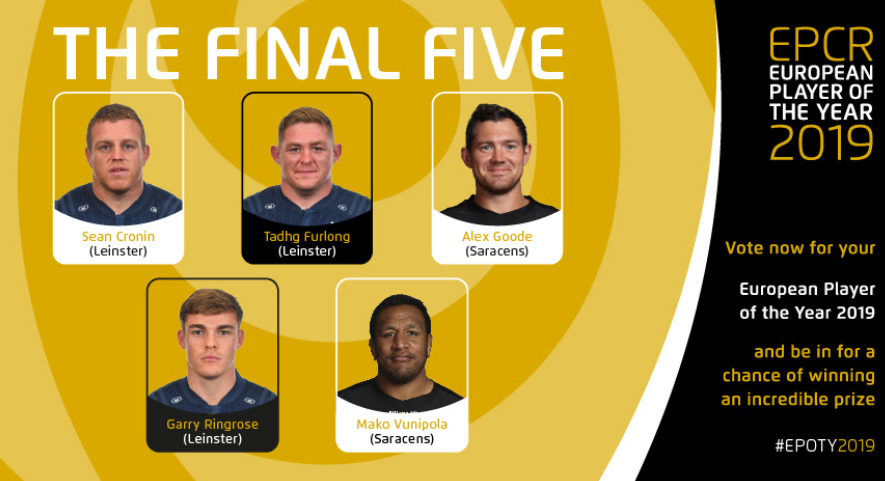 Hooker Cronin has had an outstanding year at the head of Leo Cullen's attack, leading the way in terms of tries scored in the competition alongside fellow Irish man Jacob Stockdale having crossed the whitewash on six occasions throughout the tournament. Having limped out of Saturday's semi-final early on with a calf injury the Limerick man's fitness will cause a huge headache for his coach in the run-up to May's decider.

Front row colleague Furlong has enjoyed a magnificent two years in club colours with his scintillating performance at the breakdown in last weekend's win over the French giants underscoring just why the 26-year-old has been touted as a possible World Player of the Year in recent seasons.

Outside centre Ringrose has enjoyed a fantastic tournament to date, continuing to enhance his reputation as one of the world game's most ferocious and efficient tackling machines. The Blackrock man has perhaps been the stand out player in the Leinster backline this season.

Voting has now reopened on the EPCR website - epcrugby.com/epoty - with the winner of this season's prize to be announced after the curtain is drawn on the club season next month.