How To Watch Leinster Vs Glasgow Warriors: Match Preview

How to watch Leinster vs Glasgow Warriors

The match is live on TG4 with coverage starting at 7:30pm.

The match is also live on Friday on Premier Sports 1 with coverage starting at 7pm.

Lastly, the match is available on demand on URC TV.

Leinster have been fairly impressive so far this season. Even in a poor display against the Dragons they were still able to win. They have three bonus points as well this season as they have been free scoring. The weekend also saw the return of Lions players Tadhg Furlong and Jack Conan, who were both excellent.

It's a positive week in terms of injury news for Leinster. Dave Kearney, Scott Penny, Jack Dunne, Rory O'Loughlin and Harry Byrne return to training after recovering from injury .

Johnny Sexton and James Ryan were further assessed this week after picking up knocks. Leo Cullen also said that Robbie Henshaw has picked up a foot injury that will keep him out for Friday, but the centre is training this week.

Adam Byrne returns to the starting lineup as Leo Cullen makes 6 changes from the 50-15 win over Scarlets last Saturday. Cian Healy, Ryan Baird and Dan Leavy all return in the forwards while Ross Byrne, Adam Byrne and captain Luke McGrath also get a start.

🔵 | Here's a reminder of your #LeinsterRugby team to face Glasgow Warriors in the URC tomorrow (KO 7.35pm - LIVE on TG4, Premier Sports and URC TV).#GLAvLEI pic.twitter.com/nuCQSMsv1k

Glasgow sit in fourth in the URC after winning three out of four games so far this season. Their only loss came in round 1 against Ulster, but since then they have been unbeaten. Glasgow have scored the most tries out of any non-Irish side in the URC so far this season so they should offer up a good challenge to defending champs Leinster.

They have a squad full of Scottish Internationals and Lions scrum half Ali Price and prop Zander Fagerson will be starting for the Warriors in Scotstoun.

This is the last round of matches before the autumn internationals so both sides will want to go into the break with a win and hope to keep up the good momentum. It promises to be exciting. 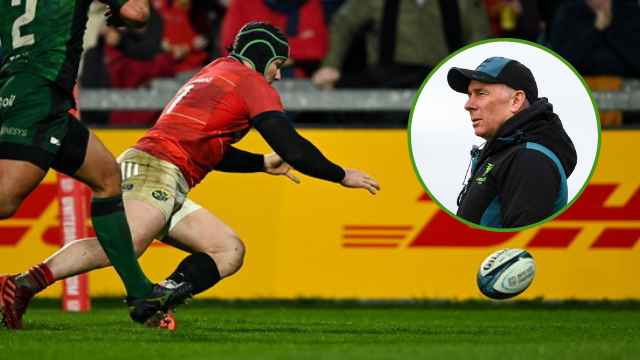 Rugby
2 years ago
By PJ Browne
Tadhg Furlong's Instagram Masterpiece Allows Us To 'Meet The Leinster Backs'
Rugby
3 years ago
By Gary Connaughton
Where To Watch Munster Vs Glasgow? TV Details For The PRO14 Clash
Rugby
4 years ago
By Maurice Brosnan
The Leinster Player Ratings After Thrashing Glasgow And Cruising Into Quarter-Finals
Previous Next