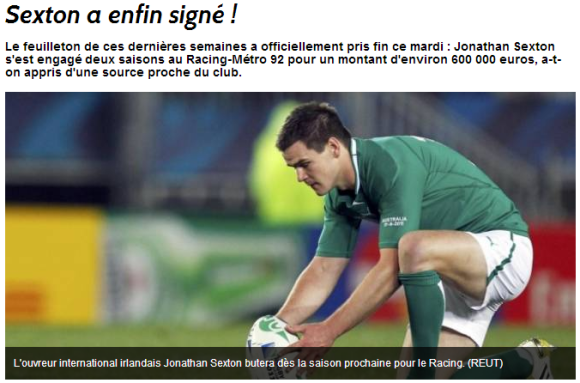 Citing a source close to the club, French newspaper L'Equipe say that Jonny Sexton has officially signed for Racing Metro. The deal will be worth €600,000 per year for two years. He will also have the option of signing for a third season.

The paper say that Sexton asked for €750,000 but that Racing President Jacky Lorenzetti would not a agree to such a high salary.

Rugby
4 years ago
By Gary Reilly
Watch: Citing Decision On Michael Hooper Hit May Be Bad News For Ireland
10

GAA
23 hours ago
By PJ Browne
'I Made A Decision To Get Fit, Lose Weight And Push On To Being An Outfield Player'
1