Let Us Stop And Give Thanks For Tadhg Furlong

Ireland beat Wales 24-14 at the Aviva today. For players, coaches and supporters, it was the most enjoyable performance from Ireland since the All Blacks win in November 2018. While the post-match analysis focused on Ireland's 'commitment', for us, the match was all about Tadhg Furlong.

The Wexford man has been beasting over all and sundry for the better part of five years. He's been so consistent at smashing the life out of opponents that it's easy to take his greatness for granted. But then, a game like today's comes around and makes you appreciate Furlong for the physical freak that he is.

Furlong is not just the best tighthead in the world. He is also one of Ireland's most reliable attacking options. Furlong's first half try settled Ireland just as Wales had grabbed a foothold in the game. Furlong may have had two teammates latch on to him, but this try was by no means simple. You can understand why Ireland coaches employ such a conservative offensive game plan when we have a 'freak of a tighthead forward' like Furlong to feed the ball to around the try line.

"They're the key to rugby, these boys.

You can't hope to stop this. 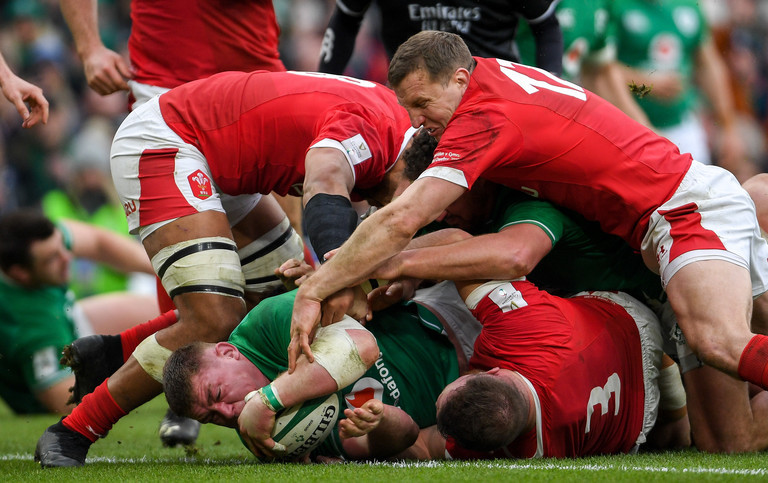 Also did you notice how red Furlong's face was after the try? It's nearly the colour of the Welsh jersey.

We approached something close to peak Furlong in the second half. Trailing by 12 points, Wales seemed to spend most of the match's third quarter in front of the Ireland posts. The game felt very much in the balance, when Romaine Poite awarded Wales a scrum in a brilliant attacking position in the 63rd minute. It felt the game's decisive moment. Either Wales would break Ireland's resolve or Ireland would repel Wales and kill off the rest of the match. Dave Kilcoyne won the decisive penalty in the scrum and the Ireland forwards went absolutely mental. Furlong was the leader of celebrations.

Check out at Furlong's face after Ireland won that scrum. The sheer manic passion of it.

Around the country, Irish rugby fans experienced spasms of joy. The following five Furlong appreciation tweets were sent within one minute of each other:

The joy on Tadhg Furlong's face after Ireland won that penalty was akin to 3am at a wedding, telling your friends you love them as Country Roads blares

(There were other appreciative Furlong tweets sent earlier in the game)

After the match, Furlong was also wonderfully articulate in discussing the match. He denied Ireland were 'desperate' to win and was hilarious in describing his own try.

"We've plenty to improve on, that being said its a really good day for us"

Tonight, before you go to sleep, stop and give thanks to god that Tadhg Furlong was born in Ireland. If he was born in another country, he might be an assassin or a king, but because he was born in Wexford, he plays rugby for us. Watching him do what he does - which is, destroying the worlds of his opponents - is one of the most joyful experiences in Irish sport.