Luke, an out-half, is the younger brother of Ireland international Jack Carty. The 23-year-old had been a member of the Connacht Academy.

He had been due to join Sydney rugby club Gordon where Darren Coleman was a coach. However, Covid-19 disrupted his plans. In the meantime, Coleman became head coach of the Giltinis.

The 2021 season, which gets underway in March, will be the Los Angeles club's first in MLR.

“My rugby had been in limbo for a few months because of lockdowns when I got this unexpected call…‘How about coming over to LA?,” Carty told the LA Giltinis website.

“It was Darren and I grabbed the chance with two hands.

“Starting from zero to build a new team, control the fate of the club and win new fans is going to be crazy exciting.

“Los Angeles is one of the sports capitals of the world and it’s going to be cool connecting with the community of rugby fans there.”

Carty is also US-qualified as his grandmother was born in New York. This was another factor in him being signed by the Giltinis, a team which is "named after a premium cocktail based on a Martini". 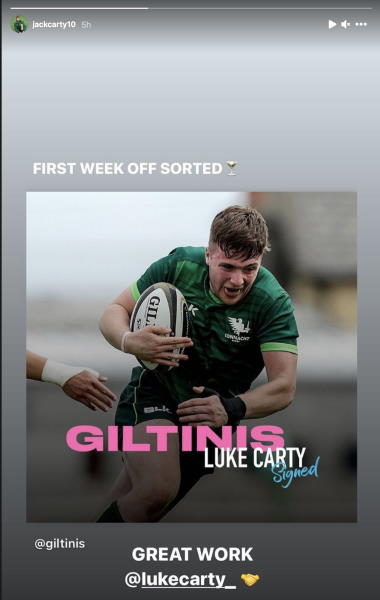 The former Roscommon minor footballer toured the US with the Connacht academy last year and played against the New England Free Jacks.

The Giltinis head coach highlighted the possibility of Carty playing international rugby for the US.

"This is one of those real sliding doors moments in rugby for Luke. His Australian trip got cancelled, I got announced as Giltinis coach and now he’s heading to Los Angeles,” said Coleman.

"Part of the mantra of the Giltinis is that we want to attract and develop players with USA or Canadian eligibility and get them to Test squads.

"Luke has a great kicking game and control on the field and wants to add to other areas of his play as a No.10."

Rugby
3 weeks ago
By PJ Browne
Best Of 2021: 'My Son Played GAA And Rugby. He Met People From All Aspects Of Northern Ireland'
43